After his big win at UFC Vegas 18, Beneil Dariush calls for a shot at Charles Oliveira, and discusses the rest of the lightweight division

Over the last few years, Beneil Dariush has slowly been working his way into the consciousness of the general MMA fanbase. After his most recent win, he feels like it is time to take a step up in competition.

With two Knockout of the Year contenders in 2020, one of which won the honors, Dariush entered this year with the wind at his back. He rode that momentum into his fight with Carlos Diego Ferreira at UFC Vegas 18.

While he was not able to get the finish in this fight, he was able to win a fairly decisive decision against the Brazilian. This has left him inside the top ten of the always stacked lightweight division, primed for a massive fight next.

With this big win under his belt, and a number nine next to his name, Beneil Dariush is looking to test himself against the best in the division. In fact, he has one name in particular that he is looking for.

Speaking in a recent interview, the Iranian-American made it clear that he was gunning for third ranked Charles Oliveira. He knows that Do Bronx is dangerous, but feels confident in his ability to win the fight.

Some might say that this is not the way to go for Oliveira, since Dariush is ranked below him. However Beneil says that he fought people that did not make the most sense from a rankings standpoint before, and wants to see others do the same thing.

“Bro, I thought we were fighters. Why is everybody so civilized all of a sudden and why is everybody like, low risk high reward. I feel like I’m working with businessmen,” he explained.

“When I was ranked number seven… they offered me (Michael) Chiesa who wasn’t ranked, and I said sure. I lost the fight, which sucks, but I lost.

“Then right after that fight, I fought James Vick. I took it on short notice just because I didn’t feel good about myself, I jumped back in. At the time he had never been knocked out, he was 5-0 in the UFC. I was still ranked, I was ranked top ten, I took the fight with him not ranked, still went out there…

“It’s like, they call you to fight. Isn’t that what you signed up for, to fight? Just say yes.”

Another opponent that Beneil Dariush has been eyeballing, is former interim champ Tony Ferguson. El Cucuy has been on a bit of a skid recently, which was a stark opposite to the legendary winning streak he was on previously.

Beneil thinks the reason for this decline comes down to how Tony has been training. In particular, he thinks the lack of sparring has been hurting Ferguson.

“I can tell you this though, if I didn’t have my team and I didn’t have my sparring partners, I would look horrible. I don’t know if I could even make it through a round in a fight. Timing, the mental game, you get all of that from hard sparring.”

“I hear a lot of stories about Tony not having that in his camp anymore. I know he does these long practices and whatever, and I’m sure they have some benefit but for a fight, iron sharpens iron.”

Who would you like to see Beneil Dariush face off against next? 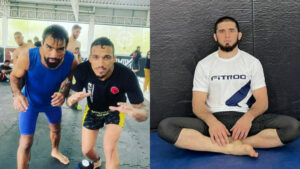