Nate Diaz is the biggest trash talker in the history of UFC and a very controversial fighter known for many incidents. He is ready to aggressively threat or troll his opponent throughout the social media for months. Just like his brother Nick Diaz, Nate simply loves to irritate and humiliate opponents and use vulgar nicknames, inside and outside the octagon. Nate simply won’t stop talking, even during the fight. He even likes to slap his opponents.

Nate Diaz is a real submission specialist. He has 13 submission victories, and his specialties are triangle choke (4 wins) and guillotine choke (3 wins). On the ground, Diaz likes being on his back. He is the most dangerous when he bleeds and when it looks he will surrender. He is also a master of transitions.

In the stand-up, Nate Diaz usually takes his hands down and provokes his opponents to hit him or take him down. His strongest weapon is left and right hook, despite he hits them in a very strange way, more similar to Karate or Kenpo than boxing. His left cross is a great long-range weapon. He usually counters a takedown attempt with a guillotine choke or a reversal.

Nate Diaz had his MMA debut versus Alejandro Garcia at WEC 12 on October 21, 2004, and he won via triangle choke. He joined UFC with the score of 5-2. His Americana victory over Dennis Davis is the fastest victory of his career – it was executed after only 2:00 in the first round. Hermes Franca is the only man in the world who submitted Nate.

Nate Diaz had his MMA debut versus Manvel Gamburyan at The Ultimate Fighter 5 Finale on June 23, 2007, in Las Vegas, Nevada. Nate won the tournament via submission in the second round.

His next opponent was Junior Assuncao at UFC Fight Night 11, on September 19, 2007. Nate earned one more great submission victory via guillotine choke.

At UFC Fight Night 12, on January 23, 2008, Diaz submitted Alvin Robinson via triangle choke and earned his first Submission Of The Night bonus.

His next opponent was Kurt Pellegrino at UFC Fight Night 13 on April 2, 2008. Nate also won via triangle choke and earned Submission Of The Night bonus again.

Nate Diaz had one of the hardest fights of the career against Josh Neer at UFC Fight Night 15 on September 17, 2008, in the main event of the evening. He also earned the first Fight Of The Night bonus.

Clay Guida defeated Nate Diaz at UFC 94 on January 31, 2009, via split decision. This was Nate’s first UFC loss. Both fighters received Fight Of The Night award.

Nate Diaz faced Joe Stevenson at The Ultimate Fighter 9 Finale on June 20, 2009. Stevenson won via unanimous decision, and this was Nate’s third Fight Of The Night bonus.

In the next fight, he was able to submit Melvin Guillard via guillotine choke, and earn Submission Of The Night bonus. The two faced at UFC Fight Night 19, on September 16, 2009, in the main event of the evening.

Nate Diaz fought again in the main event of the evening at UFC Fight Night 20 on January 11, 2010, versus Gray Maynard. Gray Maynard won via split decision.  After this fight, Nate decided to compete in Welterweight division.

Then he faced Marcus Davis at UFC 118 on August 28, 2010. Diaz earned technical submission via guillotine choke in the third round, and also Fight Of The Night bonus.

Dong Hyun Kim was a great opponent at UFC 125 on January 1, 2011. Nate won via unanimous decision.

Rory MacDonald defeated Nate Diaz at UFC 129 on April 30, 2011, via unanimous decision. After the match, Nate decided to compete in the Lightweight division again. 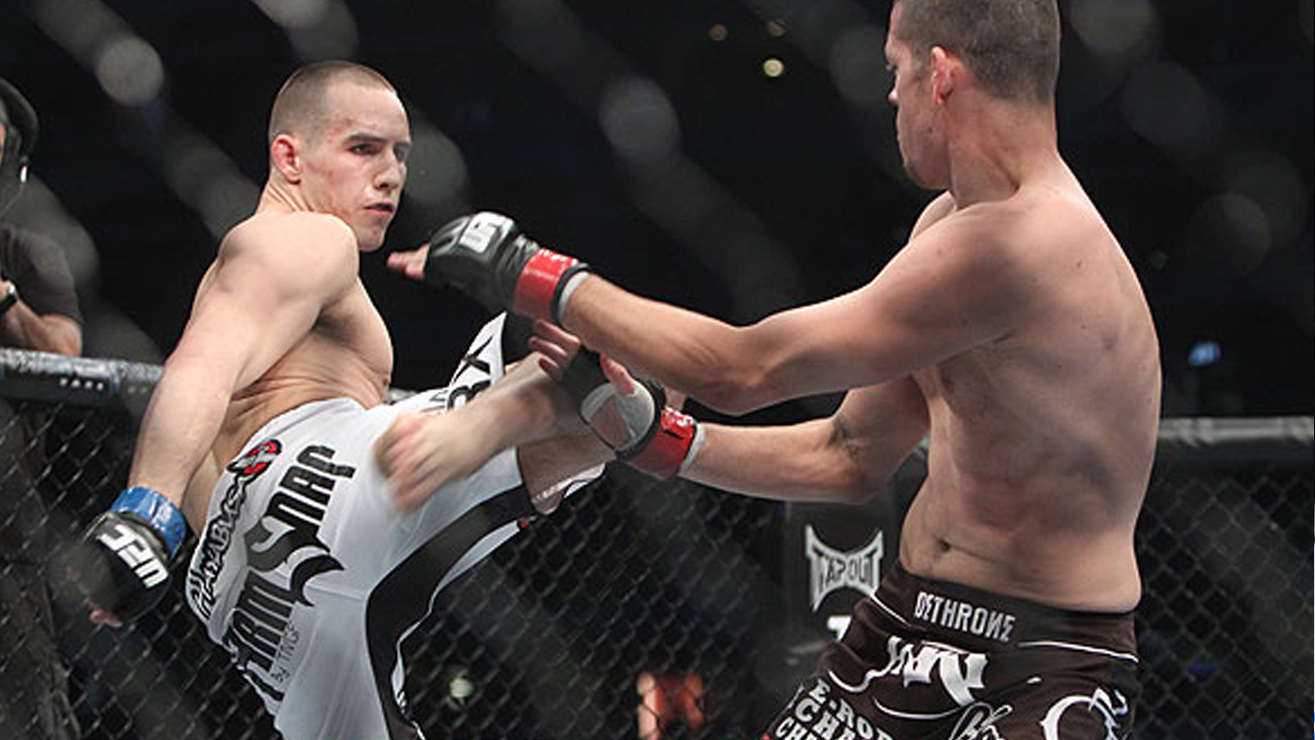 Nate faced Takanori Gomi at UFC 135 on September 24, 2011. Despite Gomi was better in the wrestling game, Diaz submitted him via armbar in the first round and won the fight, earning another Submission Of The Night award.

His fight with Donald Cerrone threatened to be incidental from the beginning. At the weigh-in, Nate threw Cerone’s hat and officials had to intervene to stop the bigger incident. The two faced at UFC 141 on December 30, 2011. 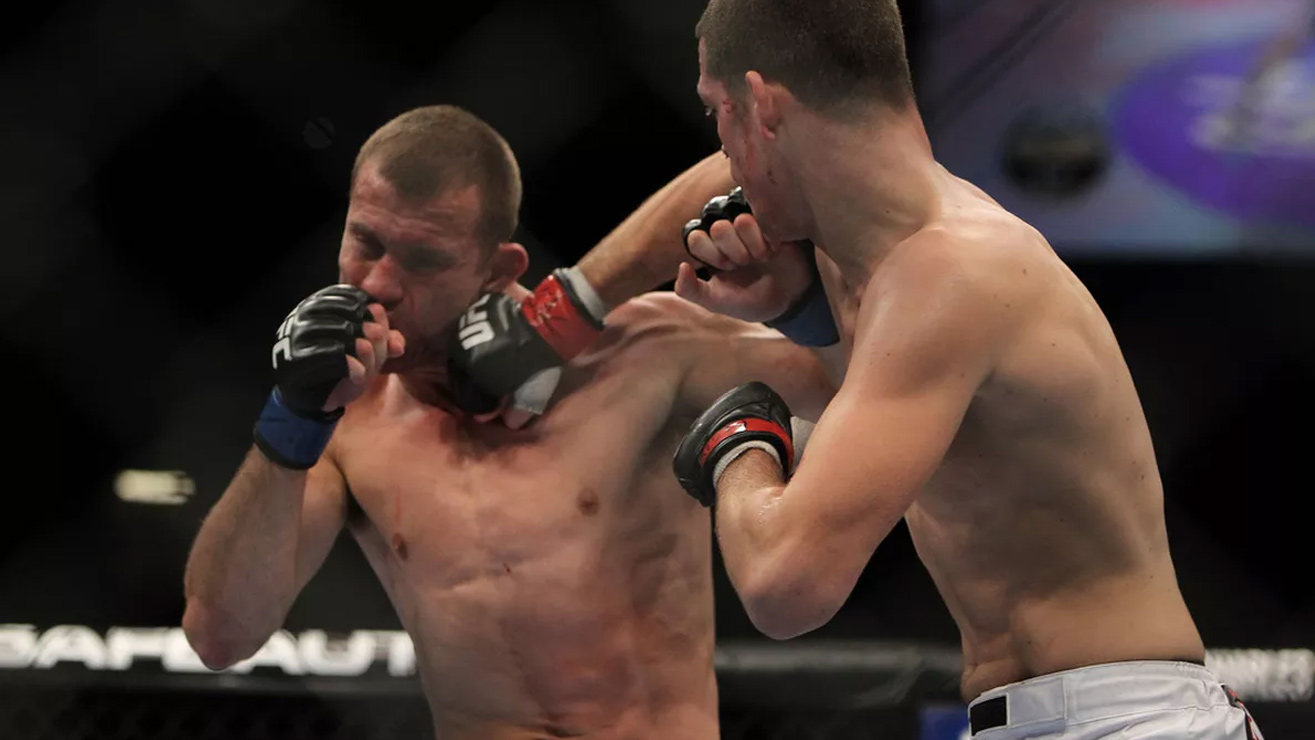 Nate Diaz was rocked and sent to the ground multiple times by Cerone’s brutal leg kicks but he recovered every time and had the best fight of his career. Nate successfully landed 82% of his strikes and won the fight via unanimous decision and both fighters earned Fight Of The Night award.

UFC On Fox 3 had two BJJ black belts in the main event – Nate Diaz and Jim Miller. Nate shocked everybody by defeating Jim Miller via guillotine choke and earning Submission Of The Night award.

Nate faced Benson Henderson on December 8, 2012, in the main event of the evening, in Seattle, Washington. The fight was one-sided from the beginning and Henderson won via unanimous decision after five rounds. 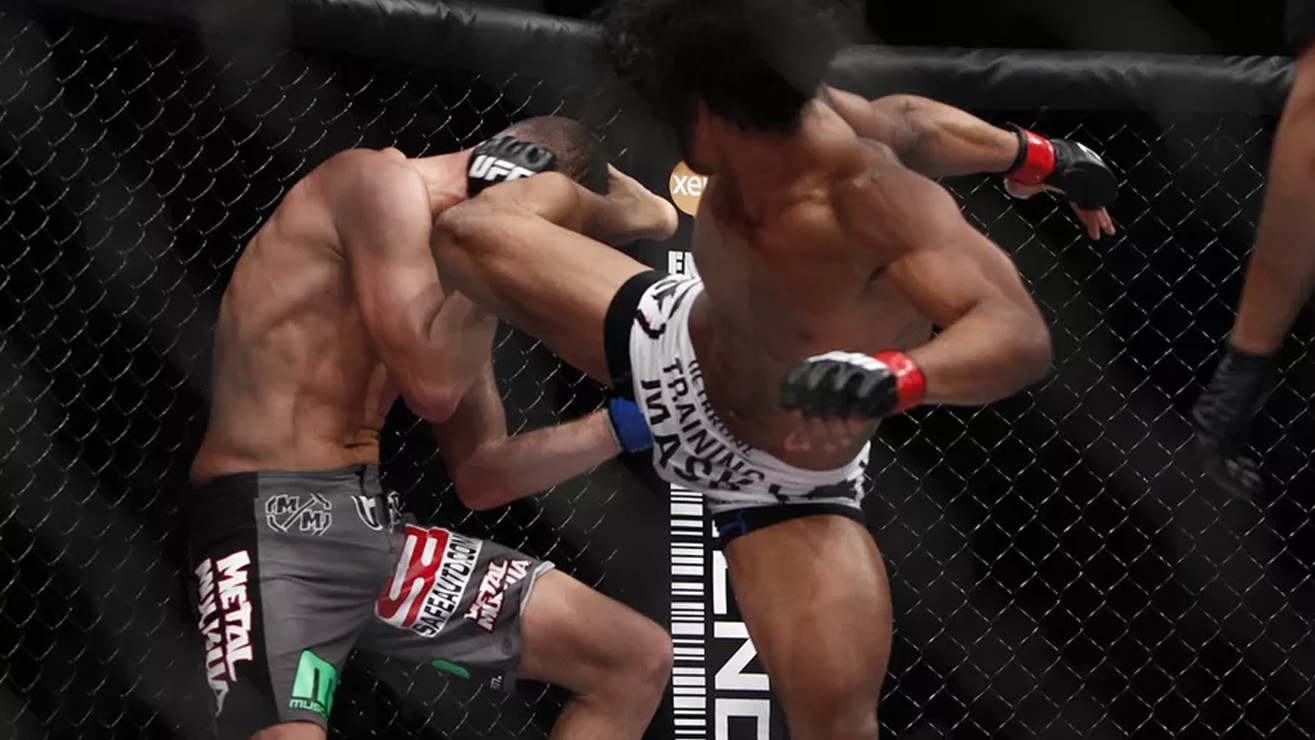 Nate faced Josh Thomson at UFC On Fox 7 on April 20, 2013. At the end of the second, Josh Thomson hit him with the right high kick to the head and started raining punches on the ground. Nate’s corner threw in the towel and Thomson won the fight via TKO.

At The Ultimate Fighter 18 Finale, Gray Maynard and Nate Diaz had a rematch, this time in the main event of the evening. The two fought on November 30, 2013. Since the beginning, Diaz was determined to revenge and started very aggressively. In the third minute, he pressed Maynard against the fence. He was landing punch after punch and the referee stopped the fight. Diaz earned Knockout Of The Night award too.

The next opponent was Rafael dos Anjos at UFC On Fox 13, on December 13, 2014. Nate didn’t pass the weigh-in and he was fined 20% of his purse. He seemed unmotivated during the whole fight. Dos Anjos won via unanimous decision. 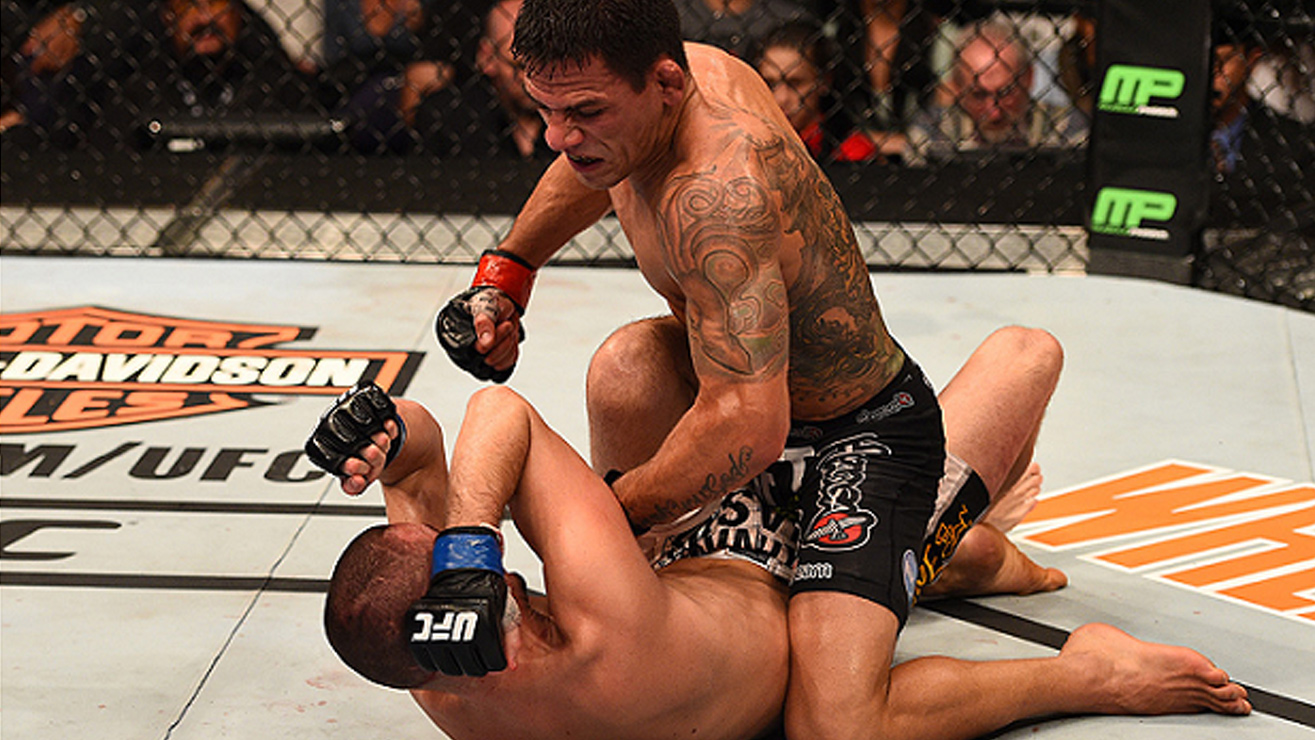 Nate Diaz fought Michael Johnson at UFC On Fox 17 on December 19, 2015. It was an amazing boxing game, like Joe Calzaghe vs Roy Jones Jr in the best days. Diaz behaved like Calzaghe – he was intentionally dropping his hands and provoke Johnson to attack. At the end of the first round, Nate was throwing trash talk at Johnson. 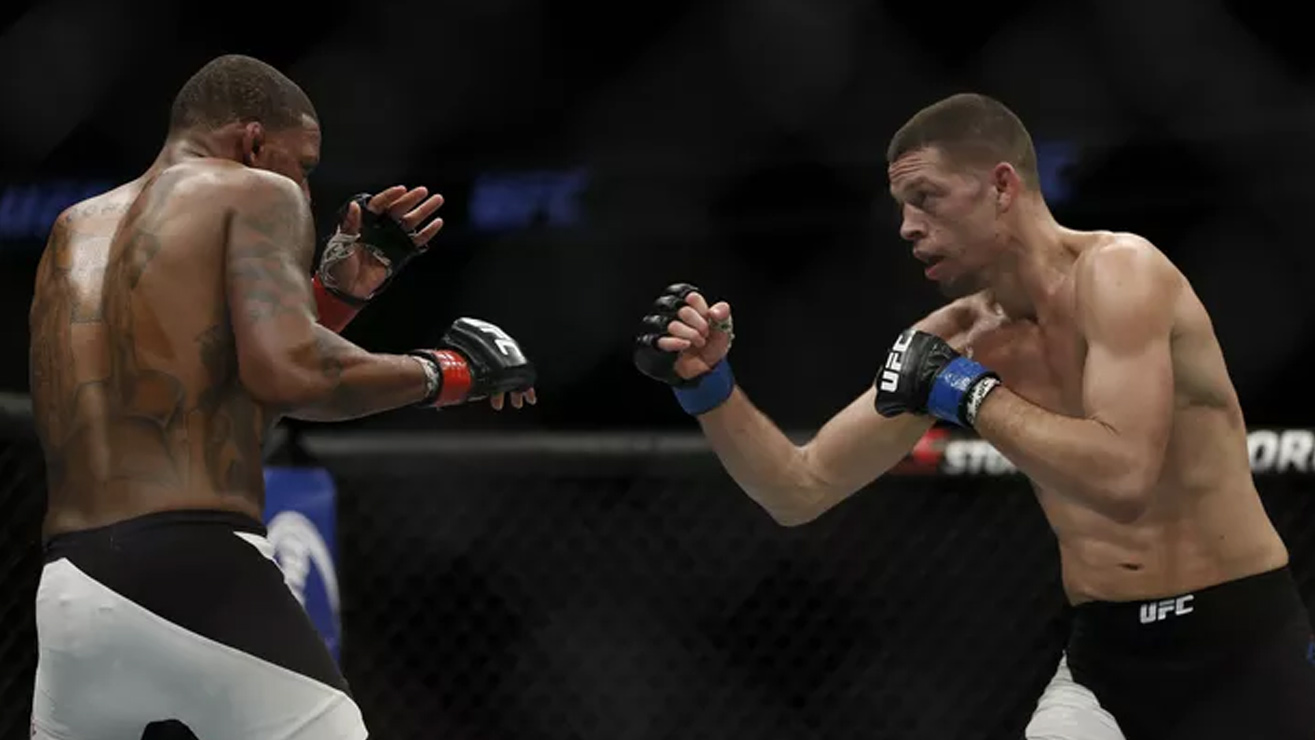 Diaz controlled the distance during the second round using his reach advantage. The fight became famous when Diaz slapped Johnson and said: “Slapped ya bitch!” He was taunting and challenging Johnson during the whole round. He repeated the same trash talk at the end of the second. During the third round, Nate even landed one right high kick to the head. Diaz won the fight via unanimous decision.

Nate Diaz faced Conor McGregor at the main event of UFC 196 on March 5, 2016. At the weigh-in, Nate threatened to punch McGregor. This was the fight with an extremely high level of trash talk. Conor was better in the first round. In the second round, Nate pressed him against the fence and slapped him. McGregor soon after opened up a cut on Diaz. 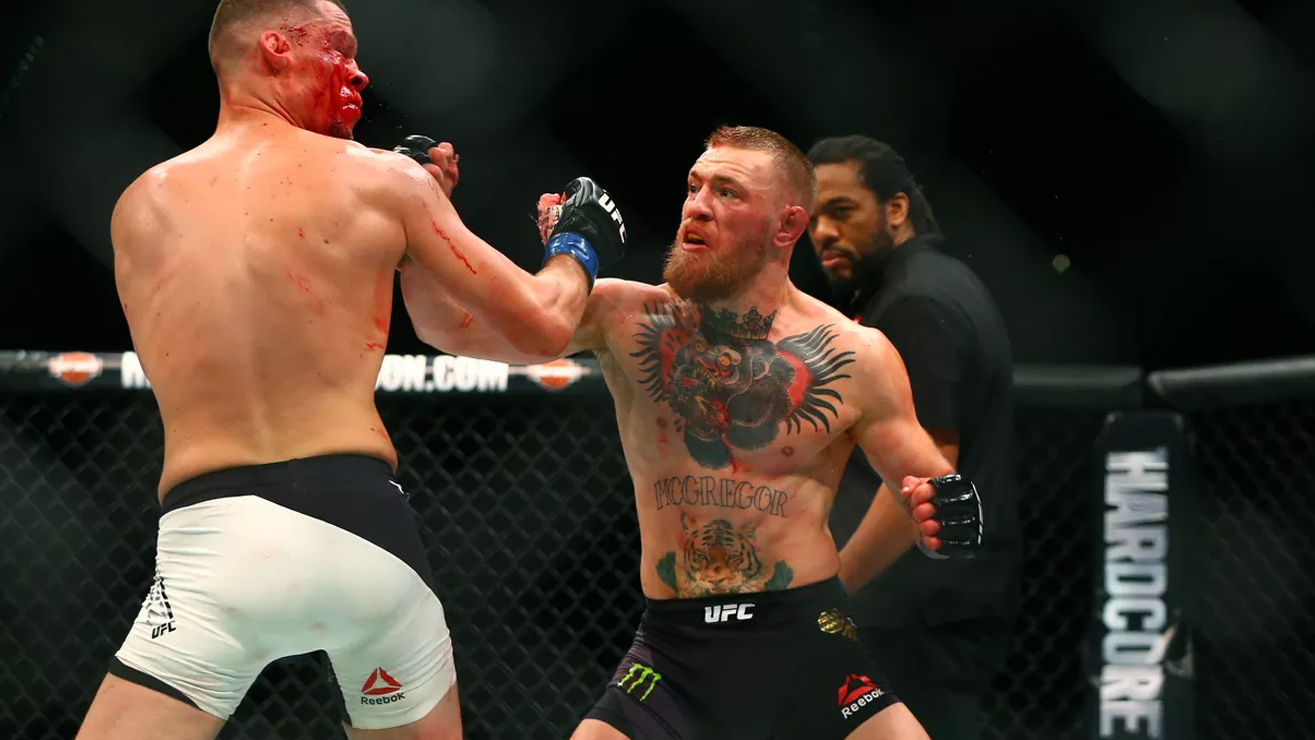 As soon as Conor McGregor tried to take Diaz down, he executed perfect sprawling defense and mounted Conor’s back, executing a perfect rear-naked choke. Nate Diaz won the fight, Performance Of The Night award, Fight Of The Night award, and Submission Of The Year award.

The two faced at UFC 202 again, on August 20, 2016. Conor McGregor was better this time and didn’t late Nate Diaz take the fight to the ground. Both fighters received Fight Of The Night award and Conor won via majority decision. After this fight, Nate Diaz took over the record for the most strikes landed by a UFC fighter – 1,926. 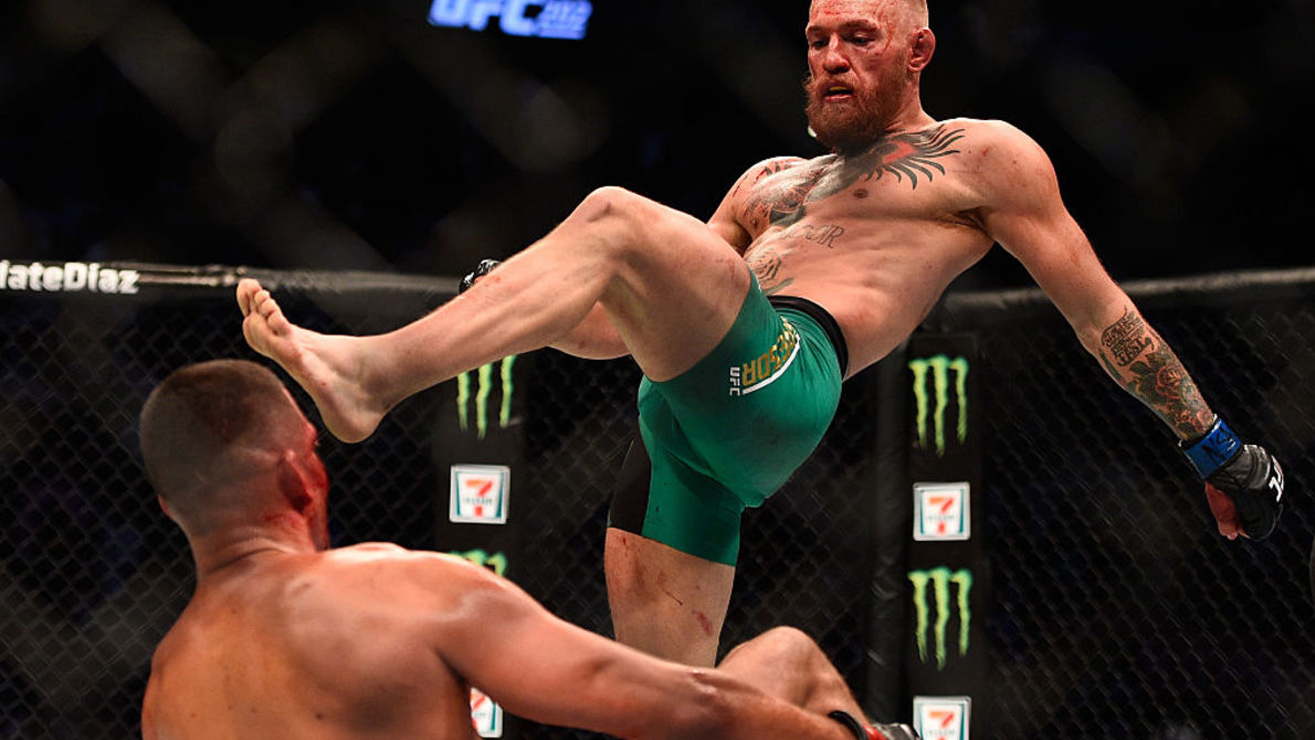 After this fight, Diaz smoked Cannabidiol and broke USADA rule but he was not sanctioned since Cannabidiol was not considered the performance-enhancing drug. The rule was changed after this incident. Nate Diaz demanded $30 million for the trilogy against Conor McGregor but later “reduced” the price to $15 million.

It was rumored that Nate Diaz should face Tyron Woodley. In the beginning, there was a discussion that the two should face at UFC 219.

But looks like Nate Diaz demanded an astronomical payout for the match too. He has slightly reduced the price for Tyron Woodley fight, compared to Conor McGregor – $15 million. Tyron Woodley has even offered the solution which could satisfy both sides.

Dana White claims that Nate was offered five or six fights after his UFC 202 loss but he has turned all of them down. Looks like Nate is financially secured and he doesn’t feel the need to fight anymore. This potential showdown, which didn’t happen in the end, has led to the serious confrontation between Tyron Woodley and Dana White.

Melissa Diaz, Nate’s mom, decided to live in the suburb of Stockton because she didn’t want her sons to be involved in gang activity. She did everything she could to keep them out of the trouble.

This weekend sparks the UFC's second card since returning to Las Vegas. This is the full weigh in results for...