Nate Diaz and Nick Diaz are probably the most rebellious brothers ever in the world of MMA. Both of them had their bright moments.

But off the scene, both Nick and Nate are known for irritating and humiliating their opponents, challenging them to fight and argue even when there was no need for that. There were so many funny situations related to Diaz brothers.

Both Nate and Nick are known for a provocative gesture, vulgar speech, and decision disagreements. Almost every time they lost via decision, both of them had very interesting comments.

Nate Diaz is a submission fighter, who prefers fighting on the ground and submission game. Nate has only 4 TKO victories and 13 submission victories in his career.

His boxing is good, especially his left cross since he is a southpaw fighter. Nate is known for pulling guard and forcing the opponents to fight on the ground.

He is currently a member of Cesar Gracie Jiu-Jitsu Team and he has a black belt in BJJ. He mostly uses triangle choke and armbar.

Here are the best moments in the octagon.

Just as his younger brother, Nick likes to be on the ground.

However, he is more skillful in boxing than Nate, and he likes to drop his guard and challenge his opponents. His strongest weapon is a right hook, and he has a strong left cross and left hook.

Nick Diaz is a southpaw, just as his brother.

Despite he has 8 submission victories, his 13 knockouts are showing the power of his hands. It is interesting that Nick has 3rd dan black belt in BJJ, while Nate has 2nd dan.

One thing is certain – when Nick grabs your hand he will never let you go! The most of his submission victories are performed via kimura and armbar.

Nick likes to fight in the stand-up until he is forced to go to the ground.

Here are the best moments.

Nick and Nate are very controversial UFC fighters. There were many brawls in the octagon. But they were making a mess in the streets, too!

Diaz Brothers Versus KJ Noons And His Father

The most interesting octagon brawl happened in 2008 when Diaz brothers irritated KJ Noons and his father. A few months earlier, Nick lost the fight from KJ due to doctor stoppage (cut).

When asked for a rematch, Nick insulted his opponent by the words “Don’t be scared, homey!”.

Nate argued with KJ’s father, showing him the one-finger salute.

His father exploded and tried to fight brothers, but Nate was throwing water on him repeatedly. Security staff had to break the melee up.

After Jake Shields’ victory over Dan Henderson in Nashville in 2010, Jason “Mayhem” Miller angrily entered the cage, asking for a rematch. Of course, Diaz brothers started insulting him and the fight broke up.

Soon there were a lot of security guards in the octagon. The fight was a heavy blow for Strikeforce.

Both Nate Diaz and Connor McGregor like to use offensive words. And the weigh-in before the UFC 196 almost ended in a brutal fist fight.

McGregor told Jake shields that he would strangle him to death. He was challenging Diaz’s teammates, but Nick returned the threat.

McGregor tried to punch Diaz with his right hand, but Dana White grabbed Diaz and pulled him away.

Diaz won McGregor one night later via a rear-naked choke.

Nate Diaz/Nick Diaz – Outside Of Octagon

The worst Nick Diaz’s incident happened in 2006 when he was defeated from Joe “Diesel” Riggs via unanimous decision. Both fighters were sent to the hospital, but Diaz brothers quickly started insulting Riggs.

Their fight in the hospital lasted for a period of time before two security guards arrived.

Nate denied to calm his brother down, despite Riggs pleased him to do that.

Nick says he landed a strong right hook and one knee, while Diesel claims he threw a combo of Muay Thai knees from the clinch.

Nate was arguing during UFC 199 with Clay Guida’s brother, Jason Guida. They met while Nate was getting out of the toilet.

Clay told an offensive word to Nate, while his brother Jason, a former heavyweight fighter, attacked him.

Nate reacted well and held Jason in the clinch for around 30 seconds until the fight is stopped. It was Nate’s most known backstage brawl.

Nick Diaz was even involved in a road rage incident when he fought two brothers who were a lot heavier than him. Diaz slipped and went to the ground.

When brothers started attacking him, he grabbed a heel hook to one of them and slipped out.

The brothers continued to hold him on the ground and he tried to “calm the situation down, using gentle words”.

But as soon as he stood up, he started attacking one of them again. Other brother pulled out a pin and stabbed Diaz few times.

Khabib Nurmagomedov and Nate Diaz fought two times during the same night. They were provoking each other on Twitter for months, and Diaz was claiming he could fight him anytime.

During the WSOF event 22 show in Las Vegas in 2015, their word war quickly turned into a physical showdown. Nate punched Khabib.

But Nate later claimed he has only slapped him. Diaz was taken off the arena, but then Nick threw a beer at Khabib, and he has ushered away too.

But Diaz brothers continued the fight during the same night! A brawl between fighters and teammates happened at the Planet Hollywood Resort and Casino.

Nate was even handcuffed!

Both brothers were banned for life from attending WSOF events!

Listen to the Condit’s post-fight statement after the fight with Nick Diaz. Nick received a penalty for a reason after that fight in 2012.

Nick even slapped Condit once during the title fight.

Nate and McGregor exchanged a lot of heavy words after UFC 202.

Nate slapped McGregor once during that match to humiliate him.

This video shows their words during the fights. 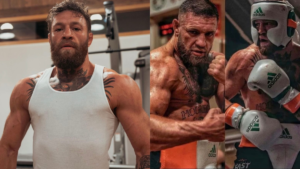