BREAKING: Nate Diaz Vs. Tyron Woodley In Discussions For Superfight At UFC219

MMA fans had not seen UFC lightweight star Nate Diaz inside the Octagon since the 20th of August 2016 when he lost his welterweight rematch against current UFC lightweight champion Conor McGregor by majority decision at UFC 202.

Despite that Diaz had previously defeated Notorious via rear naked choke submission in the second round at UFC 196.

Diaz’s coach Jose Garcia, who has a long history of working with the fighter, posted on Social Media saying that the #6 ranked lightweight is now in training.

He then deleted the post after it went viral, but awkwardly posted again later on in the day. 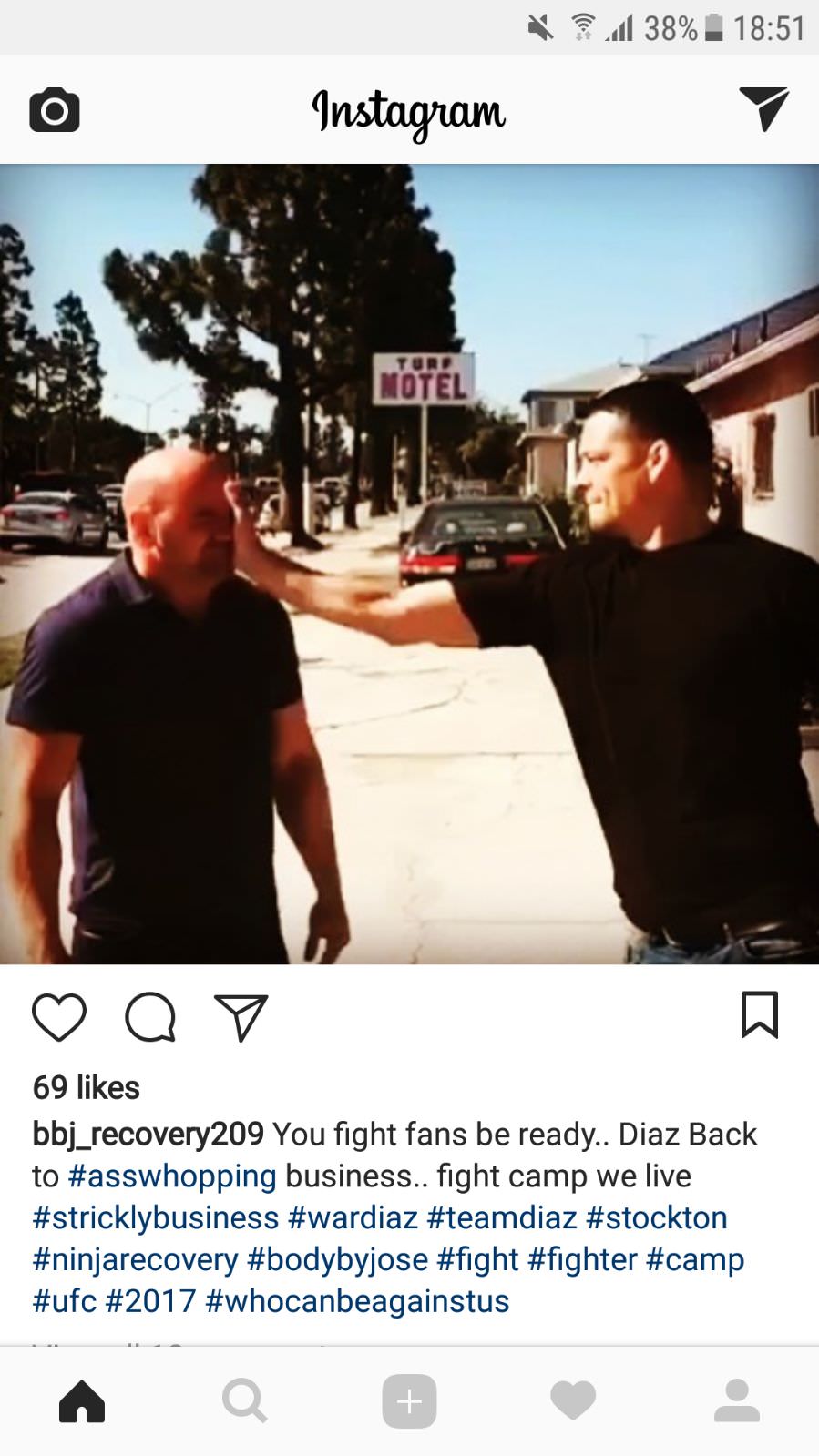 With the hashtag “#2017”, meaning we may just be lucky enough to see the Diaz back inside the octagon before the year is out.

I’m told that Nate Diaz is currently finalizing the deals for his next fight. I was not given the opponent but was told “Nate’s supporters will love this matchup”.

The UFC is now scrambling to secure the main event for UFC 219 on their New Years Eve show given that Holly Holm vs., Cris Cyborg is not an option for the event. However, Dominick Cruz has been pulled from his fight with Jimmie Rivera due to a broken arm injury and McGregor allegedly being pulled off the event due to his recent controversial cage invasion at Bellator 187. They desperately need someone to fill the card with it being suggested that Diaz could be fighting in 2017 by his own coach.

MMAFighting confirmed that UFC officials were discussing a scrap between Woodley and Diaz but that no deal has been locked yet.

This was the rabbit in the hat I eluded to yesterday on the show. No deal yet, I’m told. They are getting creative. Couple other ideas, too. Event is 6 weeks away and no main event. https://t.co/96XuOBHzll

Tyrone Woodley could potentially be defending his Welterweight title against Diaz at the end of the year after it emerged that the Diaz was back in training camp.

Meanwhile, Woodley was seen in action at UFC 214 event in Anaheim, where he successfully defended his title against submission specialist Demian Maia.

“Don’t be surprised if you see me in the next couple days announce a fight. “It’s a sport about risk and reward. It’s a sport about becoming a legend. You look at guys that have stepped up on last minute, and it changed their lives. I don’t think that I should be any different.

“There’s a lot of guys in my weight class that are talking; they’re chirping, everybody wants the title, everybody wants to fight me, everybody thinks they can beat me. People are talking because they think I can’t fight. They think I’m injured to the point where I can’t compete, and I’m not going back and forth with them, so that gives them more wings to keep flying.

“At the end of the day, none of the people in my division right now are the fight that are going to get me to legendary status,” he added. “Get me to the point where I’m a household name. I’m looking for that, and I might have found that fight.”

The fact that Nate Diaz is back after such a long stint out is exciting enough, but a potential scrap with arguably one of the best fighters in MMA is something we simply cannot wait for.

Do you guys want to see this fight to happen?

Report: Nate Diaz’s coach leaks that his fighter is back in training camp for a fight
← Read Last Post