As one of the tallest fighters in the division, Holly Holm tries to keep the fight standing and deliver knockout strikes. With a boxing background, she rarely misses her left-hand counters. She has never been knocked out in an MMA fight! On the ground, Holm mostly delivers hooks and hammer fists.

The Preacher’s Daughter is a very patient fighter who waits for the opponent’s mistakes. Her trademarks are patience, world-class left high kick and left diagonal kick to the body, right side kick, and unerring left cross and left hook. Holly Holm is also known for an outstanding takedown defense.

Even 7 of her 15 matches in MMA were finished after a successful kick!

The Road To The Top – Fresquez Productions, Bellator, And Legacy FC

Holly Holm made her MMA debut in Fresquez Productions: Double Threat event, on May 4, 2011, in her birth town, Albuquerque, New Mexico. In the second round, she crushed Christina Domke via devastating right low kick. 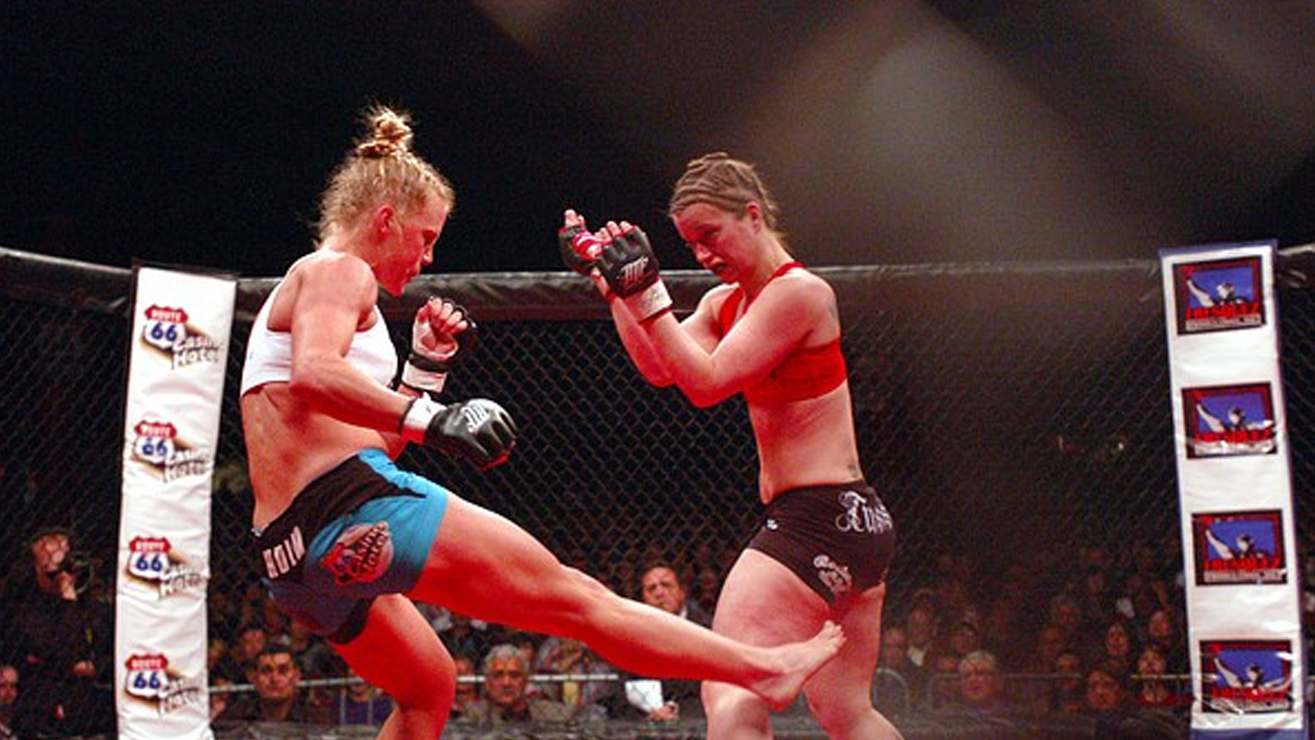 In the next fight, The Preacher’s Daughter demonstrated the brutality of a left diagonal kick to the body. On September 9, 2011, Jan Finney was knocked out in the third round. 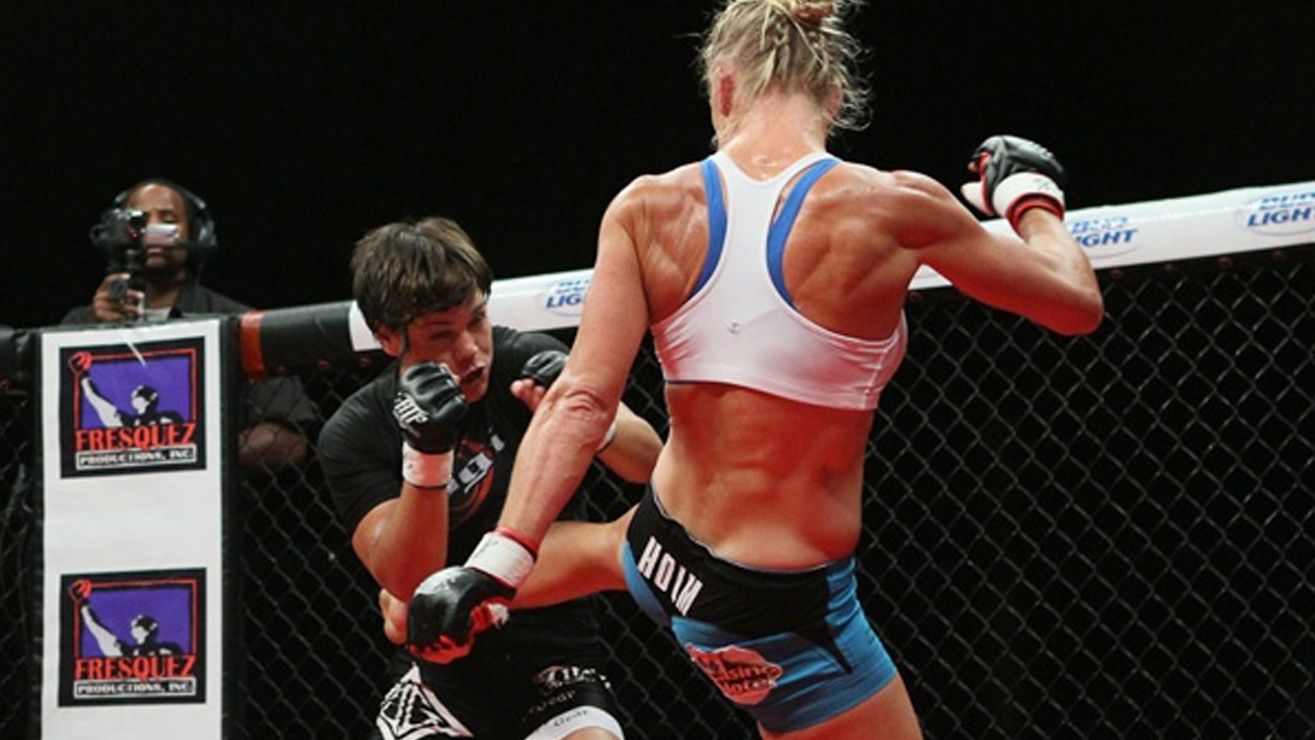 During the year 2013, Holly Holm had four excellent fights. After TKO over Katie Merrill in the Bellator 91 event, she defeated Allanna Jones via head kick and Nikki Knudsen via stunning body kick and knees. In the last fight of 2013, on December 6, Holly Holm defeated Angela Hayes via unanimous decision and got a chance to fight for Legacy FC championship belt.

The event was held on April 4, 2014, in Albuquerque, New Mexico. Holly’s rival was Juliana Werner and this was the main event of the evening. This was Holly’s first 5-round fight.

Holly Holm controlled the whole fight and delivered a world-class left high kick in the fifth round. After Werner went down, she continued delivering punches and referee stopped the fight. This victory opened her up a chance to test her skills in the UFC. 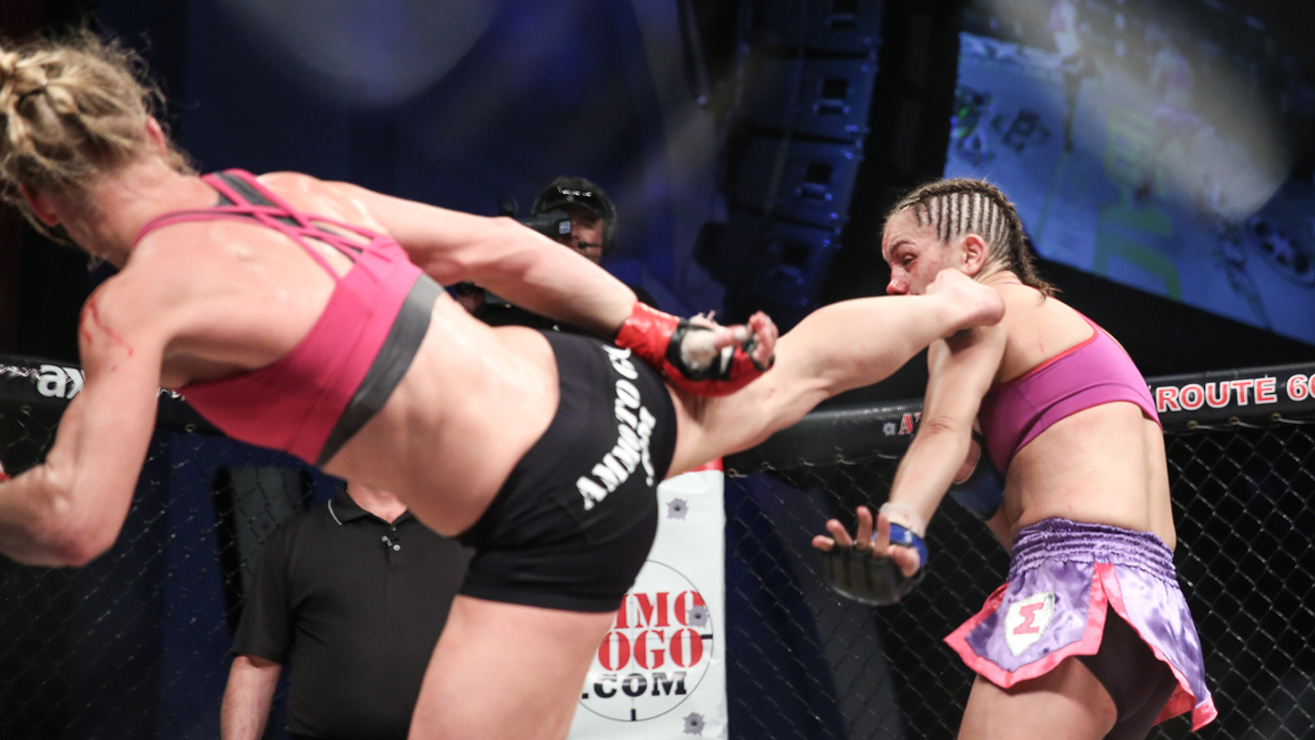 Holly Holm had UFC debut against Raquel Pennington in UFC 184, on February 28, 2015, in Los Angeles, California. After an excellent and dynamic 3-round fight, Holly won via split decision. 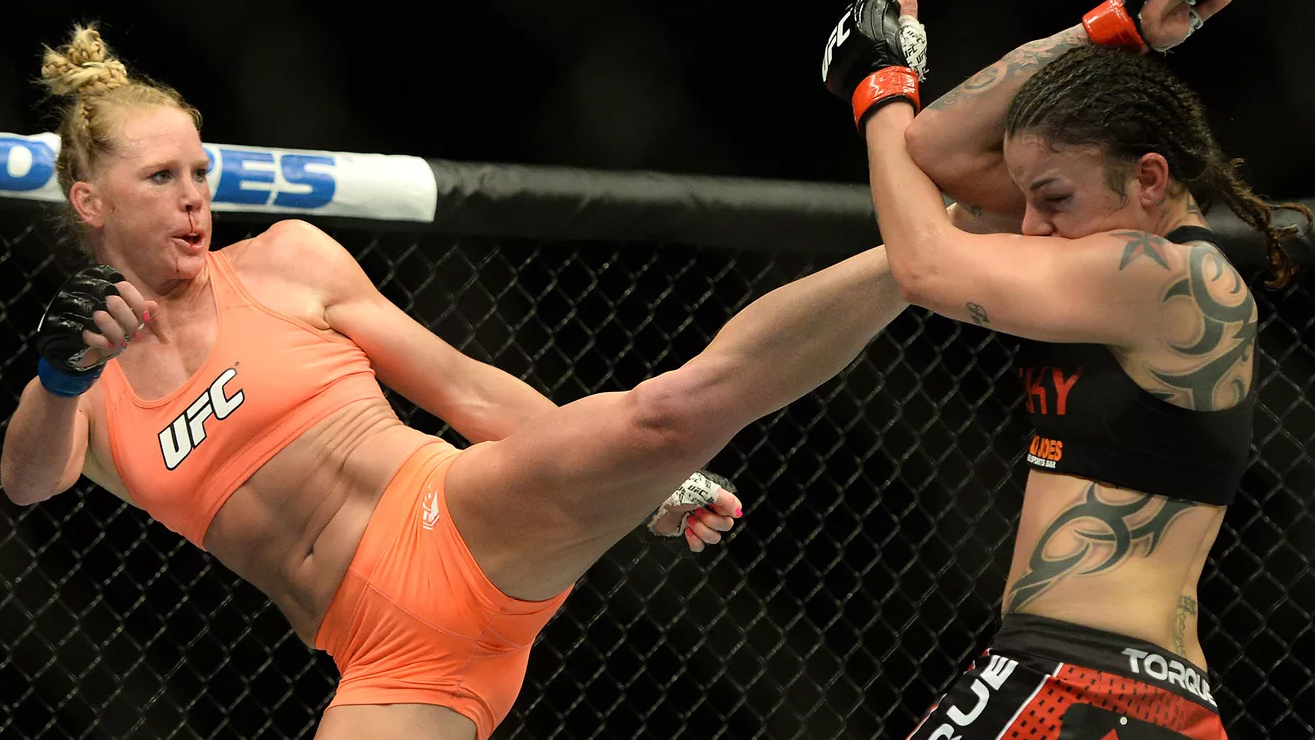 Her next opponent was Marion Reneau, in UFC Fight Night 71, on July 15, 2015. Holly Holm had a slightly easier job this time and won via unanimous decision after three rounds. With a score of 9 consecutive victories, Holm got a chance to fight the championship belt. 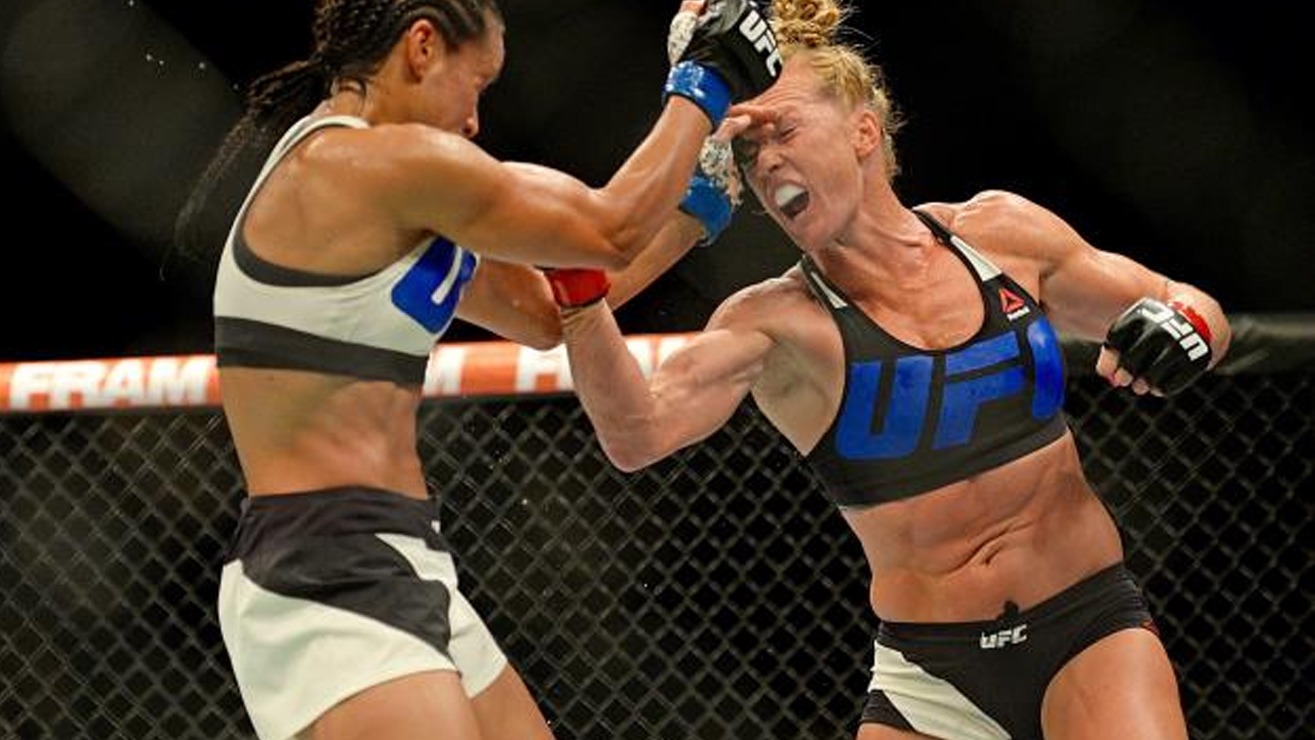 The two angry rivals faced on November 15, 2015, in Melbourne, Australia. There was a lot of tension in the air before the fight. Ronda Rousey was unsuccessfully trying to take Holly Holm down during the first round. Holly simply had the punch or kick counter for every single Rowdy’s punch or takedown attempt.

In the first minute of the second round, The Preacher’s Daughter delivered a brutal left high kick which knocked Ronda out. After a few right hammer fists, the referee stopped the fight and Holly Holm became the new UFC Women’s Bantamweight Champion. She was also rewarded with Fight Of The Night and Performance Of The Night bonus. 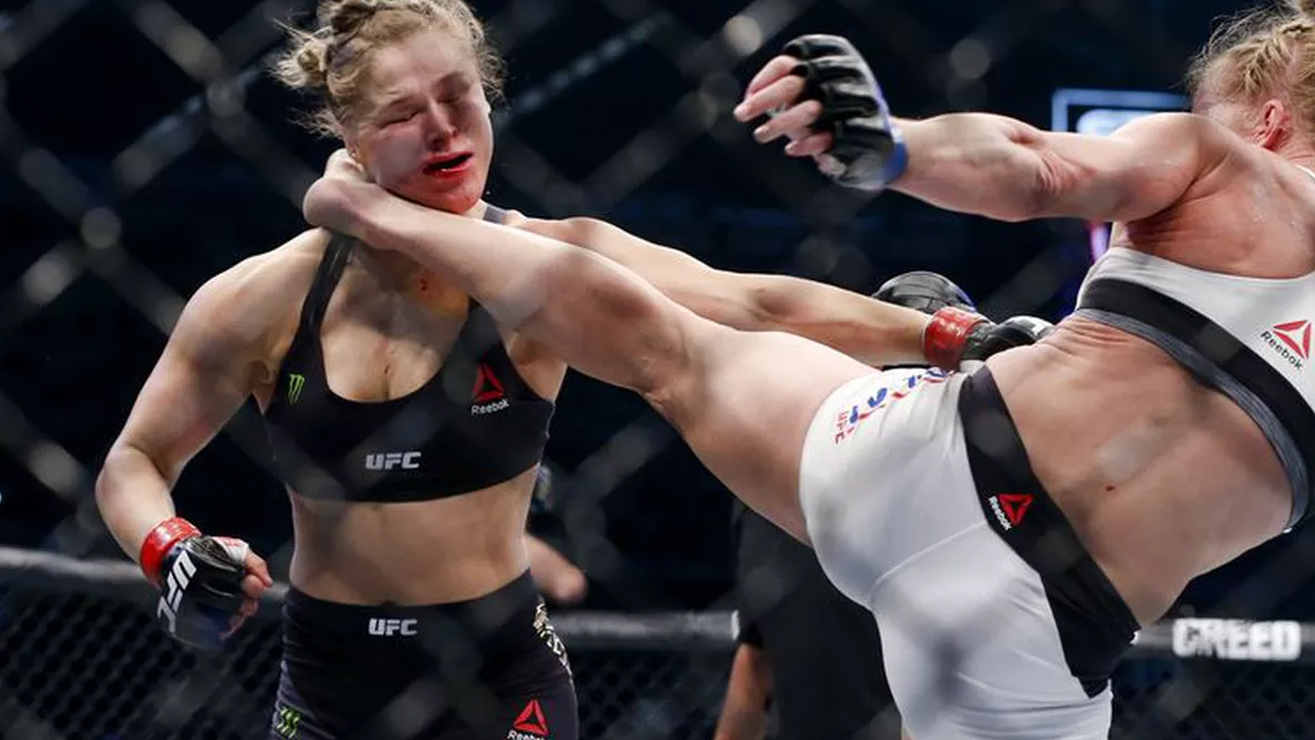 It was the co-main event of the evening.

The Cupcake was persistently trying to take the fight to the ground and she finally made it in the round 5. Miesha Tate won via rear-naked choke. This was Holly’s first defeat in UFC and the only submission loss. 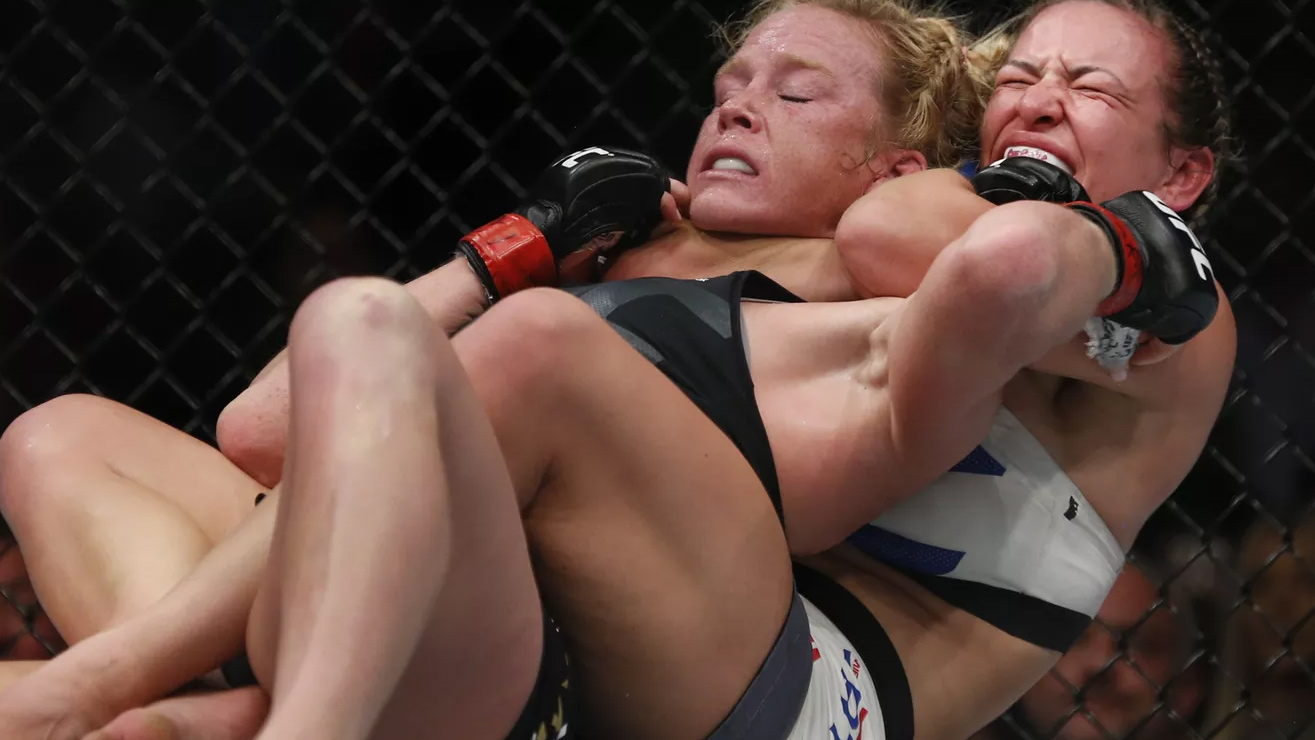 In the next fight, despite the defeat, Holly Holm fought in the main event of UFC on Fox 20, against a Peruvian superstar, Valentina “The Bullet” Shevchenko. The event was held on July 23, 2016, in Chicago, Illinois.

Since both fighters are tremendous southpaw strikers, the fight was more than interesting to watch. After excellent five rounds, Valentina won via unanimous decision. 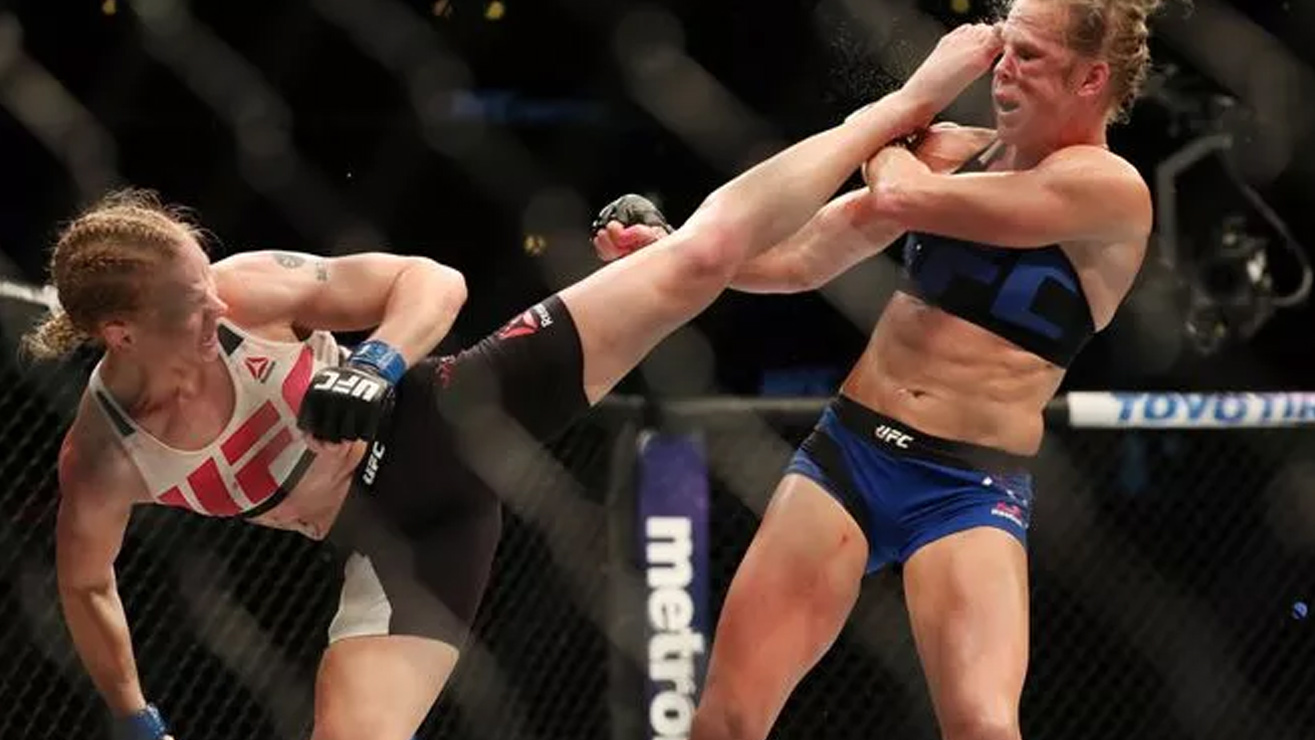 Holly Holm had her Featherweight debut on February 11, 2017, in Brooklyn, New York, against a Dutch kickboxing legend Germaine de Randamie, in the main event of the evening. This was probably the collision of two best strikers ever in the world of female UFC. 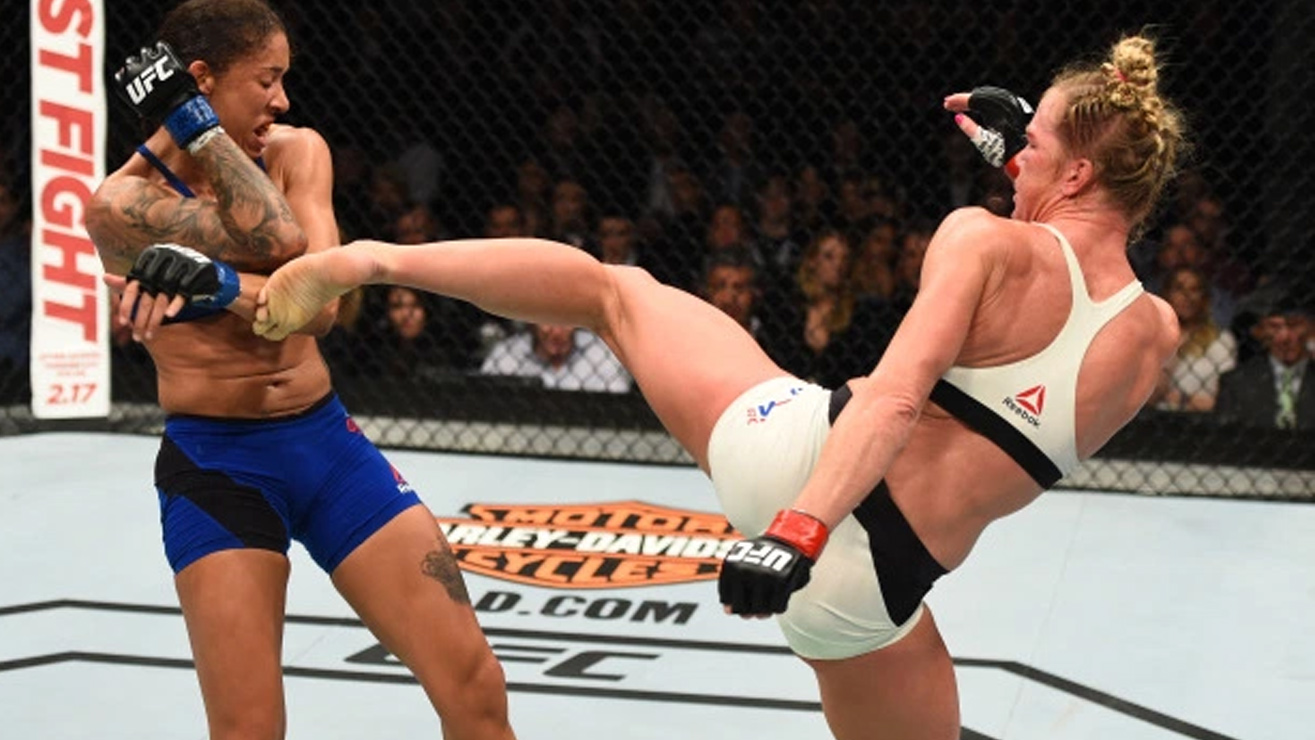 The referee Tod Anderson didn’t even issue a warning! After the great right Brazilian kick, Holly Holm kicked Germaine to the head while she was still on her knees. The referee also pretended nothing happened. Germaine de Randamie won the fight via unanimous decision.

Holly Holm returned to Bantamweight and fought again the main event of the evening on UFC Fight Night 111, which was held on June 17, 2017, in Kallang, Singapore. It was the old Holly again. She brutally knocked Bethe Correia out via left high kick, followed by the left uppercut, in the third round. It was also her second Performance Of The Night. 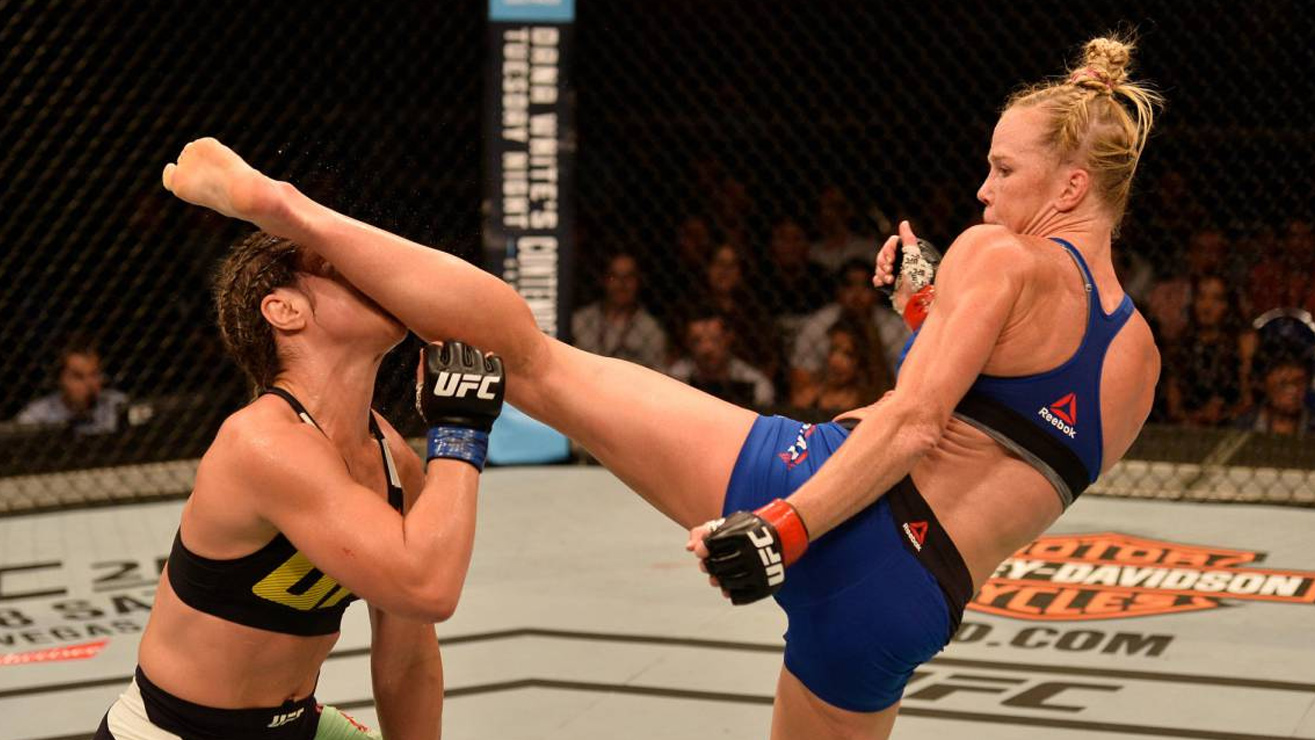 After 5 rounds of a bloody and battered war, Cyborg won via unanimous decision. Cris Cyborg was more patient during the fight and her strikes to Holly Holm’s head and body were mostly finding its target. Holly Holm was better in the clinch control, but she couldn’t take Cyborg down.

This was the fight where both of fighters demonstrated a Spartan level of endurance. Even during the championship rounds, it was one of the best stand-up fights in female UFC ever. Holly Holm was defeated cause Cyborg landed more clear shots during the last two rounds.

Holly Holm was married to Jeff Kirkpatrick since 2012. Early 2019 it was revealed couple separated in March of 2018 and later filed for a divorce. She is a Christian and she maintains close relations with her family. 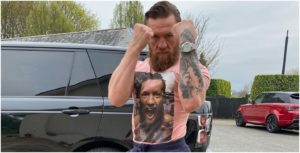 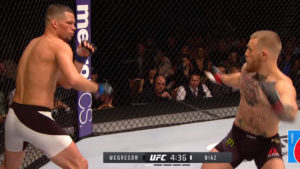 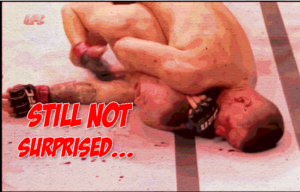 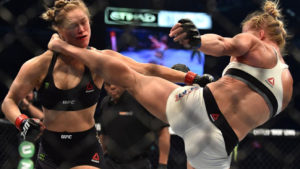 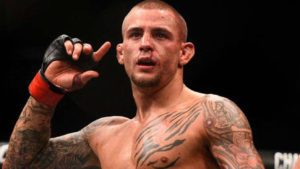 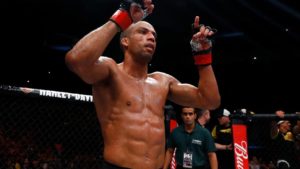