The main event features one of the biggest female mixed martial arts bouts of all time, a women’s featherweight title bout where dominant Cris Cyborg puts her title on the line for the first time when she faces former bantamweight champ, Holly Holm.

Cyborg is 18-1 and hasn’t lost since her professional debut in 2005, whereas Holm is 11-3 and just recently ended a three-fight losing streak. Holm who recently won against Bethe Correia via knockout in the third round via a head kick at UFC 111.

Cyborg showed great patience while still following Holm around the Octagon and she blasted the former UFC champion with several right hands that definitely rattled her jaw.

Cyborg really started to take over in the closing part of the round, constantly throwing combinations and landing a huge barrage of punches just before the horn ring.

Cyborg extended her winning streak to eight and made the first defense of her UFC title. Cyborg proved tonight that she has both has both power and technique, She had the stronger shots, but she also picked apart and outlanded Holm for most of their 25-minute contest.

After the win, cyborg was being asked about what comes next and she wasted no time asking for her next fight in Feb. against a former Invicta champion from the featherweight division.

Cyborg lands a flurry at the end of the round and catches Holm!!@CrisCyborg #UFC219 pic.twitter.com/AtWkW0tTWu

👀 @CrisCyborg lands clean to end the round #UFC219 pic.twitter.com/Ldi8o2yh1z

Bloody and battered, but both show #Respect

What a fight! #UFC219 pic.twitter.com/dZBLRZBDg0

#AndStill!! @CrisCyborg ends 2017 as the featherweight champ at #UFC219! pic.twitter.com/4Mc03fSKzi

Pros react to the win:

I apologize for ever doubting you @criscyborg

No disrespect to Cyborg, but I had @HollyHolm winning that one @ufc #UFC219

I don’t care the results even Holly is my Hero

I got @Amanda_Leoa over both… you can mark my words… again. 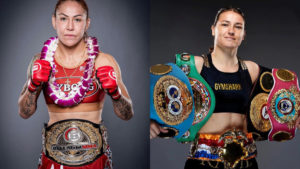