In response to comments from Wonderboy, saying he should go back to lightweight, Nate Diaz utterly roasts Stephen Thompson

Recently welterweight contender Stephen “Wonderboy” Thompson suggested that the most recent losses that Nate Diaz has had should send him back to 154lb. Stockton’s favorite younger brother fired back at this with the most hilarious response imaginable.

Diaz is now 2-3 since he made the move to welterweight, with his two victories coming against fellow lightweights Conor McGregor and Anthony Pettis, just as 170lb. Every time he steps up against legitimate welterweights he seems to largely get overwhelmed, as evidenced by his most recent loss to Leon Edwards.

This was what made Wonderboy suggest that Nate would be better off moving back to lightweight, which he explained in a recent interview. However Nate did not take too kindly to this, firing back with a now deleted post to his Twitter where he showed the welterweight contender getting knocked out by Pettis, the former lightweight champion that Nate himself was able to beat.

“You should go to 155,” Diaz wrote before adding a link to the highlight of Wonderboy getting knocked out. 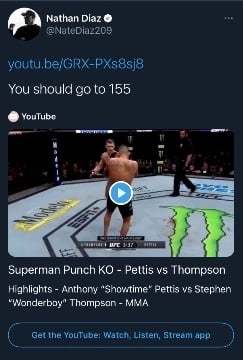 This post from Nate Diaz came in response to a recent interview from Stephen Thompson. In this interview, Wonderboy expressed feeling like Leon Edwards did not finish Nate when he could have, and that Nate should go back to 155lb, where he might be better suited.

Obviously this did not sit well with Nate, who has repeatedly expressed his disinterest in cutting weight at this point in his career. That being said, there is still a lingering question about what the next move will be for Nate, other than the ever-present trilogy with Conor McGregor.

Perhaps depending on how things turn out between Wonderboy and Gilbert Burns, a fight between Stephen Thompson and Nate Diaz could be fun. After all, it is not often that someone beefs with the Nicest MF-er in the sport.

Don Frye Reflects On Going From Horseshoer And Firefighter To UFC Pioneer: 'I Needed Something To Do'
← Read Last Post

Jake Paul Wants To Be The Most Disruptive Boxer In History
Read Next Post →
Click here to cancel reply.