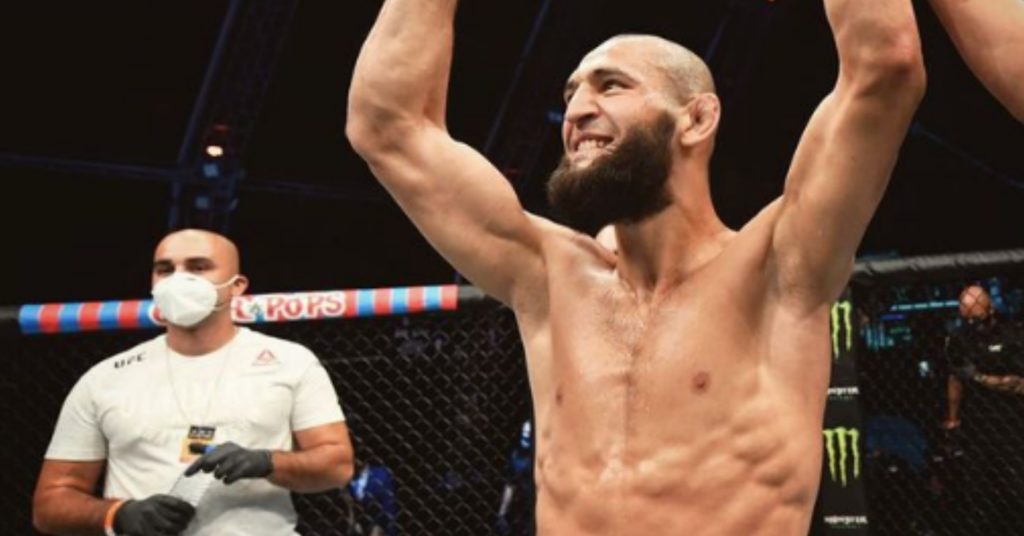 When it was announced that Khamzat Chimaev was out of his fight with Leon Edwards, fans wanted to know what happened. Now there is some clarity on what caused his withdrawal.

People have been waiting to see how Chimaev can stack up against the number three ranked welterweight contender. In his first three fights, the Chechen had shown incredible skill, but this was a new test.

However things have not been easy making the bout happen. After Leon Edwards tested positive for COVID-19, the fight was moved from December to January.

Unfortunately it would be canceled again after Chimaev was forced out of the contest. With no details announced as to why the fight was canceled, all that was left was speculation as to what went down.

It was suspected that COVID-19 was the cause of Khamzat Chimaev being forced out of this fight. This was confirmed to be the case about 24 hours after the news broke that the fight was off.

That being said, it is not a current case of coronavirus that is forcing him out of the bout. According to his manager, Ali Abdelaziz, he is having lingering symptoms of having previously had the virus.

“Khamzat had coronavirus and when he went back to gym, his lungs did not recover 100%. He needs time for his lungs to recover, and right now it’s about taking that necessary time.”

Statement on Khamzhat Chimaev (@KChimaev), via his manager Ali Abdelaziz (@AliAbdelaziz00). "Khamzat had coronavirus and when he went back to gym, his lungs did not recover 100%. He needs time for his lungs to recover, and right now it's about taking that necessary time."

This is not the first case we have seen of a fighter having lingering problems from contracting COVID-19. Cody Garbrandt had a similar situation that forced him out of his title fight with Deiveson Figueiredo.

Hopefully Khamzat Chimaev will not have these issue much longer, and he can get back to action soon. Even if it is not against Leon Edwards, fans just want to see this prospect tested.

Coach: Only A Matter Of Time Until Conor McGregor Connects On Hittable Dustin Poirier
Read Next Post →
Click here to cancel reply.