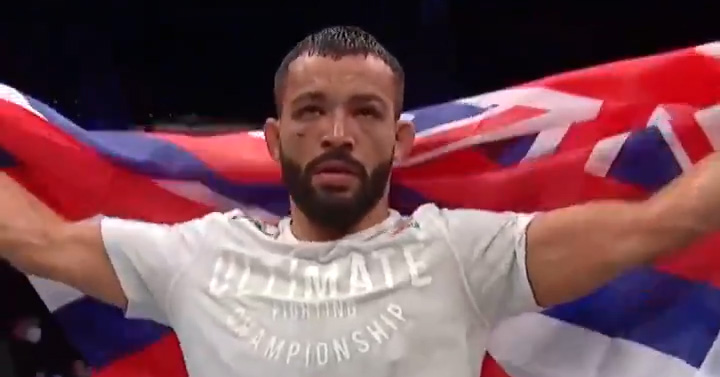 We are underway and Ige lands the first shot with a left hook. Barboza goes for a knee up the middle as Ige continues landing in the pocket.

Barboza begins landing shots from the top as Ige looks to recover. Barboza continues landing huge hammer fists. Ige scrambles up and the fight is back to the feet. Barboza lands a big uppercut to the body. Ige throws a nice kick to the body that lands as Barboza throws his first leg kick. Ige lands a big shot to the body and follows it with a left hook. Ige lands a nice right hook as Barboza throws another leg kick. A big check hook lands from Barboza as Ige lands a flying knee. Ige closes the distance and clinches up against the fence but Barboza is able to separate. Ige lands a nice right hook with under thirty to go in the round. Knee to the body lands for Barboza and the first round comes to an end.

Ige lands a nice left hook that backs Barboza up. Barboza answers with a strong low kick. Nice jab by Barboza as Ige goes for a kick to the body. Ige closes the distance and is able to take down Barboza. Ige lands a few huge shots from the top as continues to look to advance position. Under a minute to go and Ige looks to keep landing shots. Ige lands another couple shot and ends the fight on top.