Holly Holm On A Boxing Match With Katie Taylor: “It Does Intrigue Me”

Holm back to boxing?

While Holly Holm has been fighting MMA for the past 11 years, she still loves boxing, and a return to boxing is still possible. A potential super boxing match with Katie Taylor is intriguing to her.

It was a rough 2021 for former UFC bantamweight champion Holly Holm. After a very dominant win over Irene Aldana to close out her 2020 injuries forced her to pull out of two fights last year. However, she returns to action later this month against Ketlen Vieira in the main event of UFC Vegas 55.

On the other side of the combat sports world, Kate Taylor defeated Amanda Serrano, successfully defending her women’s lightweight titles in the WBA, IBF, WBO, and WBC. It was also the first boxing match headlined by two women at Madison Square Garden.

It does intrigue me a lot

Taylor’s promoter, Eddie Hearn, listed Holm as a potential opponent in the future, and Holm told The MMA Hour on Monday that the fight intrigues her.

“You know, it’s hard for me to think past, you know, I’ve got my own fight MMA in front of me and my, my eyes are still on the UFC gold. But I will say this, if I was to go back to boxing, that would be the fight I would want. And it does intrigue me a lot. To the point where, before I was like, I’ll never box again. And I’m not saying that. And there’s a lot of people that have tried to transition back and forth, and nobody’s really been able to do it successfully. And that drives me, I want to show people, I was able to come to MMA from boxing, but I can also go back, and it does, like, get me excited,” Holm said.

While Holm’s goal is to become a UFC champion again, a long-term dream is to box Taylor.

“So my goals are on my fight right now and with MMA and all that, but I always say there has to be like short term and long term goals. You know, dreams that you see right away and then dreams that you see- you have to live for today. But you still have to dream for what you want the future or else you’ll never get anything done today. Right? You have to be working towards something. So yeah, I like to live for today. I’m in my training camp right now from May 21. But that doesn’t mean that I don’t think about like, ‘wow, this would be a great’ you know, thing to kind of pursue,” Holm said.

There is no doubt that a boxing match between Holm and Taylor would be massive, and with the craziness of combat sports, anything is possible. But for now, Holm is focused on her fight with Viera, which goes down in three weeks.

.@HollyHolm tells @arielhelwani if she returns to boxing, Katie Taylor is the fight she wants 👀

"It does intrigue me. A lot. To the point where, before, I was like I’ll never box again, and I’m not saying that [now].” 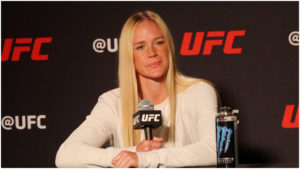