Cris Cyborg might have been a UFC star but the fame didn’t exclude her from mistreatment from Dana White and the promotion.

Cyborg has always been very vocal about her problems and the rocky relationship between her and the UFC boss. Before her eventual debut, White would defend Ronda Rousey calling Cyborg “it” and White would later pin her as “Wanderlei Silva in a dress.”

Despite the controversy, Cyborg would finally be let into the UFC in 2016. Without a women’s featherweight division in place, Cyborg would have to cut an additional five pounds to meet the catchweight limit of 140lbs. This was very physically and mentally taxing on the Featherweight, making her toughest weight cuts of her career.

A few months after a successful main event win, the UFC would grant would grant Cyborg her wish and make a Featherweight division for her to compete in. The UFC offered her to fight for the inaugural title at UFC 208 (Feb 2017), however this didn’t work with Cyborg’s timeframe.

The UFC would move on without Justino, White would not wait any more time for her to challenge for the title.  Instead, they booked Holly Holm vs Germaine De Randamie for the inaugural title. De Randamie would win the title in a close contest and would seemingly flee the scene, not wanting to defend the title against Cyborg, despite champion obligations.

Cyborg would get her first official title opportunity against Tonya Evinger later that year, finally grasping the UFC title. Fast forward a year later and Cyborg would lose to Amanda Nunes in late 2018. Cyborg would push for the rematch, however Dana White said she didn’t want to fight Nunes.

This would be the last straw as Cyborg left the UFC shortly after her filmed altercation with White.

Cyborg would test free agency and found herself in a better working environment with Scott Coker and  Bellator MMA.

The Brazilian would hit a Grand-Slam, knocking out Bellator Champion Julia Budd, to pick up her fourth world title in her promotional debut at Bellator 238. Cyborg would then submit Arlene Blencowe in her first title defense to finish the year strong.

Cyborg, having immersed herself in her new promotion, wouldn’t keep the opportunity just to herself. Cyborg would put up a Tweet amidst all the chaos between Jon Jones and the UFC, and frustrating problems that bothered other UFC fighters.

Any fighter out there want to be a fighter and want to stay a star and don’t want to have to worry about the promoters trying to be all in the videos, all on the records, dancing…come to @bellatormma

Any fighter out there want to be a fighter and want to stay a star and don’t want to have to worry about the promoters trying to be all in the videos, all on the records, dancing…come to @bellatormma 🎤 @SHOsports @ScottCoker #TheMoneyTeam @jonnybones @StephenEspinoza pic.twitter.com/RSP832VmZF

Cyborg channeled her inner pop-culture knowledge to reference Death Row Records CEO Suge Knight’s famous quote: “Any artist out there that want to be an artist and stay a star, and don’t have to worry about the executive producer trying to be all in the videos, all on the record, dancing … come to Death Row!”

Cris Cyborg isn’t afraid to stand up to Dana White and helps when she can. She has recently shown support for Jon Jones in the middle of his negotiations with the UFC for better pay.

The problem is they don’t want to give a larger revenue share to the athletes because with the company going public it would change possible investors interest, there is an incentive to keeping an 80% revenue split with the athletes. 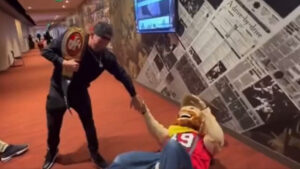 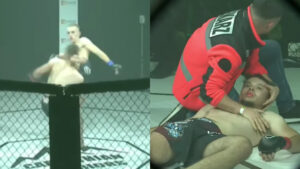