Brian Ortega discusses coaching against Alexander Volkanovski on The Ultimate Fighter, and the potential of them scrapping on the show

Brian Ortega and Alexander Volkanovski may not have any real personal beef, ahead of their stint as TUF coaches. However T-City says that this might change by the time the show is over.

There was a fair bit of excitement among fans, to see the featherweight title fight between Volkanovski and Ortega. This then turned into frustration, when it was revealed that a positive COVID-19 test on the behalf of the champ forced the fight to be delayed from its initial UFC 260 schedule.

When that happened, it was expected that the bout would just be rescheduled for a few weeks down the line. Instead, the UFC decided that these two elite 145lb fighters would make great coaches for the return season of TUF, expected to air next month.

There may not be any beef between Brian Ortega and Alexander Volkanovski, but things can change when they are on the set of TUF. The champ has already expressed interest in trying to push Brian’s buttons, but that might not be the best plan.

Speaking in a recent interview, T-City said that while he does not want to get kicked off the show, he might not be able to stop himself from picking a fight with Volkanovski. He says that the isolated nature of their time in the show could get the best of him.

“So I have to live an isolated life as well,” Ortega continued. “Although I’m not in the house, I’m in another house, but I can’t be partying, I can’t be around people, I can’t be in big crowds. So yeah, I feel like I’m going to get frustrated. My only way of dealing with frustration is having fun on this show. And if I do get pissed off, then I do get pissed off.”

Do you think Brian Ortega and Alexander Volkanovski will throw down on the set of The Ultimate Fighter? 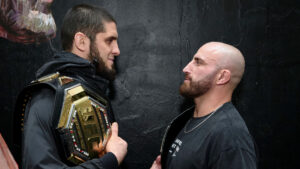