It’s no secret that Dana White is a betting man.

The UFC boss is known for making big bets both in the casino and on the sportsbook. White would double down once again for a boxing match of interest this past weekend: Canelo Alvarez vs. Caleb Plant.

White would be seen watching the boxing main event at the same time as the UFC 268 co-main event. While Rose Namajunas vs. Zhang Weili was going on, White was watching the Alvarez vs. Plant boxing match on his phone, cageside.

And yes… White hilariously made it known he paid the pay-per-view to see it.

Following both the UFC and boxing main events, White would reveal he put $100,000 on the line for Canelo Alvarez to not only win, but to win by knockout. With the fight nearing the distance, White was subject to be scared for his money. However, Canelo saved the day when he potted Plant in round 11.

After 2 consecutive knockdowns, the fight was over and Canelo earned another title. White earned bragging rights with the result. He won $40,000 along with his $100,000 back. The UFC president picked Canelo as a -240 favorite to win by KO. 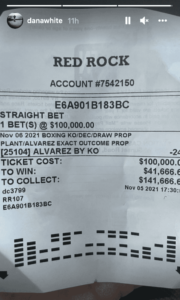