We’ve seen our fair share of broken noses on MiddleEasy, and we’re not sure what the exact amount that is considered a ‘fair share.’ Heck, we’ve probably seen an unfair share amount of broken noses on the site. So unfair that if we were playing a game, we would undoubtedly be disqualified for breaking the rules. We’re like the Rousimar Palhares of seeing broken noses — we see broken noses until someone asks us to stop, and then we continue to look at broken noses just to be as unsportsmanlike as possible.

Today at EFC Africa 24, Nkazimulo Zulu landed such a direct and incredible kick on Craig Ninow’s nose that it shifted into this Playdough like substance compiled of loose skin and regret. Check it out and props to Benjamin Brandt for the find.

So, Larry David might be the villain in the new Superman movie 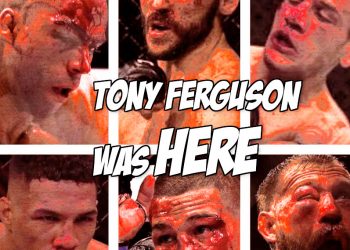 Pics/Video: Ronda Rousey’s cut was nastier/cooler/bloodier than we first thought

Video: Is this fan picking his nose on camera at UFC Phoenix a hero?

Pic: The faces of Tony Ferguson’s last 6 opponents are nasty/gnarly