Tony Ferguson you are a wildman. El Cucuy is also the Baraka of MMA. Ferguson is the type of dude who will cut you.

If Ferguson brought a knife to a gun fight? MiddleEasy would still put our hard earned cash on Ferguson walking away from the scene, licking blood off his knife.

It feels like the MMA world has been here before with Ferguson. If UFC 238 felt very similar to UFC 229, where our hero systematically dismantles a former WEC star, you would be correct.

Following Ferguson’s win over Tony Pettis at UFC 229, MiddleEasy did a ‘The Faces Of Tony Ferguson’s Last 6 Opponents Are Nasty/Gnarly‘ post. Due to time and all things MMA always being a flat circle, after El Cucuy pieced up Cowboy Cerrone at UFC 238, the MMA world is back marveling at that sweet Tony Ferguson violence.

It’s the good stuff that can power you through a dull Monday.

Here’s what MiddleEasy said back in then. Cue the Scooby Doo time warp.

“Quietly but violently Ferguson is on a 11 fight winning streak that dates back to October 2013. For those counting along at home, that’s five years of being untouched in the cage. In a game of inches, that punishes you deeply for your slip-ups, Ferguson is standing tall.

The strangest or wildest part is the mark Ferguson has left on the faces of his last six opponents. A pic floating around the interwebs as we speak is that of of Tony Ferguson’s last six challengers post-fight.”

Quoting ourselves in a post about the faces of Ferguson’s last nine bloody victims? Peak MMA, but also peak T Ferg violence. How is MMA’s entry into the Marvel vs. Capcom or Super Smash Bros. fighting franchises not a bigger deal already?

One day, the MMA world will back at Tony Ferguson’s career and realize it was never truly appreciated during it’s time. 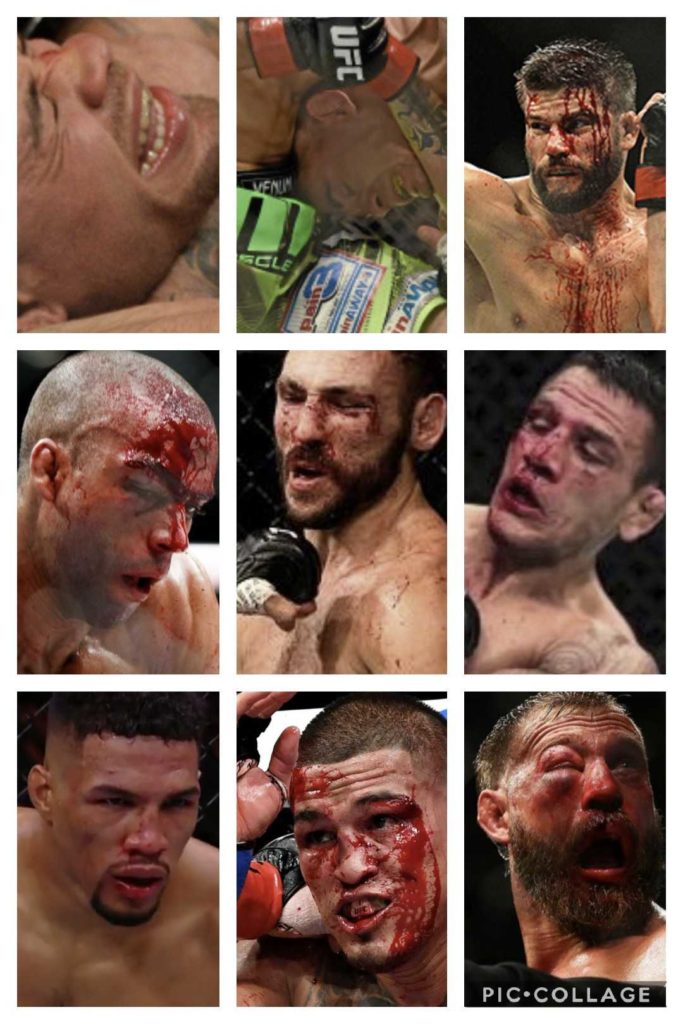 H/T to @imerom for the pic.

Dana White: McGregor Will Step Up If Khabib/Ferguson Fall Out

Khabib Doesn’t Like Tony: “I Don’t Understand His Mind, Nothing Personal”

Dana White: ‘Justin Gaethje And I Need To Get On The...