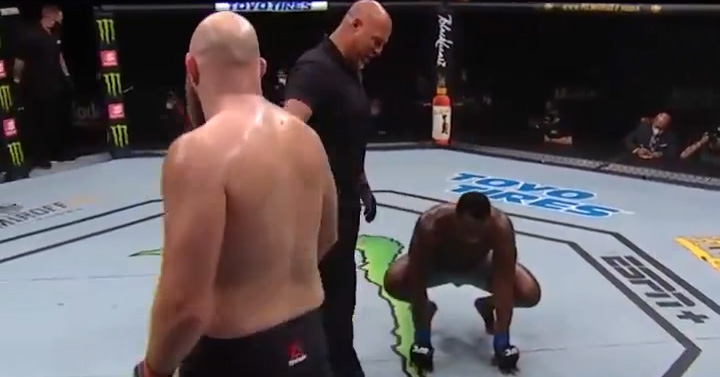 Ben Rothwell defeats Ovince Saint Preux via back and forth war.

Rothwell catches the kick and grabs ahold of OSP’s neck against the fence. The two continue to hand fight against the fence as Rothwell just lays on top of OSP. Rothwell continues to chase the choke as OSP tries to get scramble up. Rothwell begins landing a few punches from the top as OSP is able to get back up with twenty seconds to go. Nothing much happens as round one comes to an end.

Rothwell lands a nice overhand and clinches up.

Both men are up against the fence landing short strikes in the clinch. Rothwell continues to land small strikes to the body and legs as he’s leaned up against OSP. Rothwell lands another body shot as OSP fails to escape the clinch. OSP separates with under two minutes to go and rocks Rothwell with a big right hand. OSP lands another punch but Rothwell lands one of his own. Rothwell initiates the clinch against the fence again and looks to land small shots. Under one minute to go and the two remain against the fence. OSP is able to escape with twenty seconds to go. OSP lands a good right hand. OSP lands a big left and bigger right and knocks Rothwell down after the final bell. We go to the judges.

We've got an even affair heading into RD3 📝 #UFCJAX pic.twitter.com/T4Ch2WLCT5