Pic: Nate Diaz Says He’s Down to Fight in Rizin and Now That’s All We Want

Nate Diaz does what Nate Diaz wants, at least after his two fights with Conor McGregor. He made enough money to joke about buying a yacht and motioning he’d purchase a garbage bag sized supply of the sticky-ickiest. More importantly, he made enough money to decide when and where and who he fights next, even after losing in the rematch. But we all know how Diaz’s view losses: They never happened.

He flat-out said he’s not doing anything until he and McGregor test out their ninja shit in round three and that no one will see him until then. So what happens if Diaz doesn’t get what he wants? Will he go back to asking out of his contract? If he does… could we see the Diaz… in Japan!?

@ufc @danawhite I would like to request to be released from the @ufc Its time for me to be on my way .. ?

Nate fuckin’ Diaz posted that he’d fight in Rizin on their official page. Yes, actually Nate Diaz. Of course, something this awesome would probably never happen, but anything can happen in MMA. Who cares about that though, just daydreaming about Nate Diaz fighting Charles “Felony Formerly Known as Krazy Horse” is good enough to suspend disbelief. Maybe his friend Kron Gracie has been whispering dollar signs in Diaz’s ear?

Check out the pic here and daydream with us. 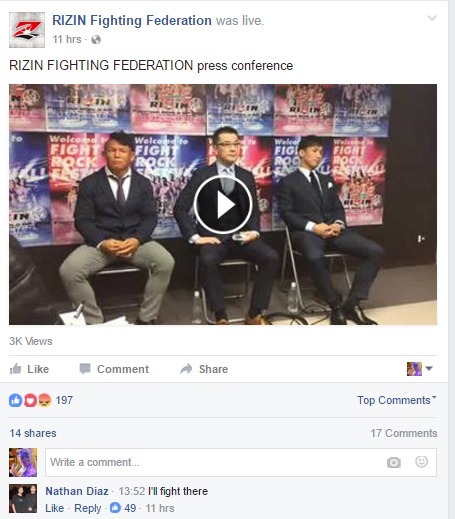 A Lesson in Street MMA: All the 2016 Black Friday shopper vs. shopper Street MMA fights in one post
← Read Last Post

Video: Gabi Garcia is Fighting an Old Lady Pro Wrestler Half Her Size in Rizin So Watch This Brutal Match
Read Next Post →
Click here to cancel reply.