Masvidal Responds to Canelo with Video of Speed Bag Skill

Jorge Masvidal was serious when he called out 4-weight boxing champion Canelo Alvarez. The “BMF” champion has always been “Gamebred” to fight anyone at any given time. After calling out Canelo, Alvarez quickly put the idea of fighting Masvidal to bed. His reasoning was that he believes boxers should stay in their discipline and MMA fighters should stay in theirs. However, Masvidal took to Twitter to show everyone that he doesn’t label himself as a mixed martial artist. In fact, Masvidal claims that he is a straight-up fighter.

Jorge certainly believes that he possesses all of the necessary tools to defeat Canelo in a boxing match. He analyzed Conor McGregor’s success during his crossover bout with Floyd Mayweather Jr. During the match, he realized that elite boxers could face issues with MMA fighters due to their unorthodox movements and methods of throwing punches. Furthermore, Masvidal said that he believes there are ways to execute these unique methods legally inside of the boxing ring.

In order to prove Canelo wrong, Masvidal showed Twitter his skills on a speed bag. The speed bag is generally the way most elite boxers show off their hand speed and coordination.

Not a boxer. A fighter #theresurrection #orale 🇲🇽 #mezcal pic.twitter.com/Bv9hO9e50n

“Not a boxer. A fighter. #TheResurrection #Orale #Mezcal,” wrote Masvidal on Twitter.

Throughout the video, Masvidal’s skill on the speedbag is shown. It seemed like the posting of the video came in direct response to Canelo’s reply, however that information can’t be confirmed.

Reacting to the Video

Although the video 38-second long video appears to be heavily edited, the work on the bag was still impressive. However, due to the edits, viewers will never truly know how many attempts it took to produce the clip. But, when you’re the “BMF” champion of the UFC, does it actually matter?

Did Jorge’s speed bag skills impress any of the fans? Let us know in the comments below. 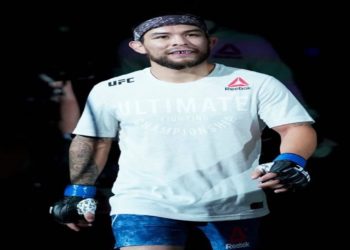