Derrick Lewis Punches Thief Who Attempts to Steal his Car, Documents it on Social Media

Derrick Lewis is one of the most powerful punchers in the entire UFC. Now, imagine doing something as stupid as trying to steal his vehicle. As expected, things didn’t go too well for the thief who wanted to take the car of Derrick Lewis, and he caught a video to prove it.

Just a few days ago, the focus of Lewis was locked in on securing a rematch against Francis Ngannou for the UFC heavyweight championship. During UFC 262, Derrick revealed why he couldn’t stand Francis as the subject of a guest fighter interview.

Derrick recently shared that he had to stop a criminal from breaking into his vehicle on social media. Furthermore, Lewis had to get the police involved.

Anyone who knows Lewis understands that his Instagram account is one of the best to follow when it comes to UFC fighters. So it’s no surprise that Lewis was able to capture it all on Instagram.

“Motherf*cker tried to break into my sh*t,” said Derrick. 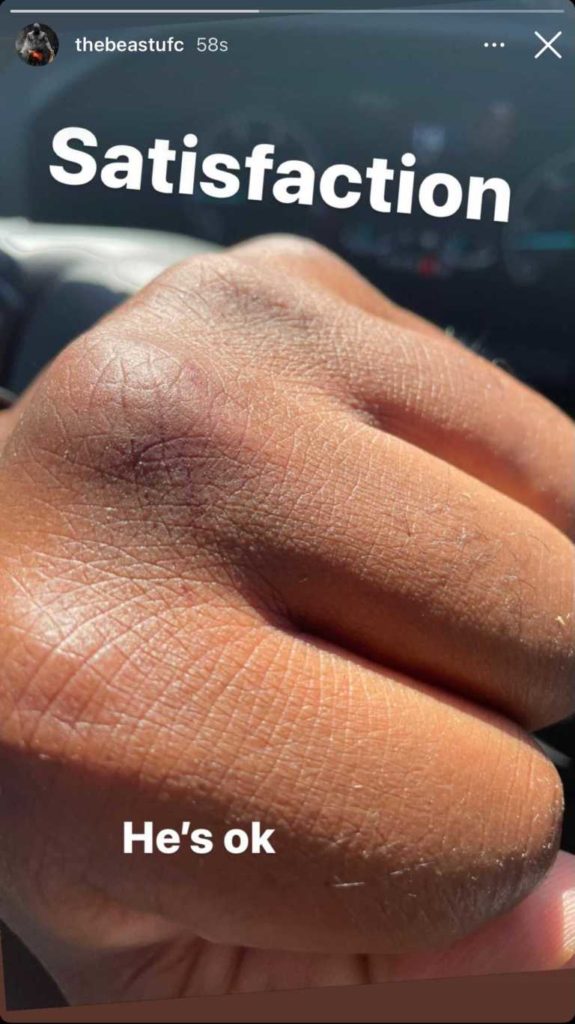 In his stories, Derrick highlighted his bruised first with the caption “satisfaction, he’s okay though,” indicating that Derrick punched the man. Video footage further showed the criminal with a bandage on his head and being apprehended by police. According to MMA Fighting, Lewis held the man until the police arrived.

“Mr. Lewis says he went over to the suspect, struck him, placed him onto the ground until the police arrived,” Silva said. “That’s the nicest way to put it,” said the police to the news publication.

Chances are, the man wasn’t aware that the owner of the car was a UFC heavyweight. Especially not one with as much punching power as Derrick Lewis. With 20 knockouts in his professional career, it’s safe to say that one punch was all it took to control the situation.