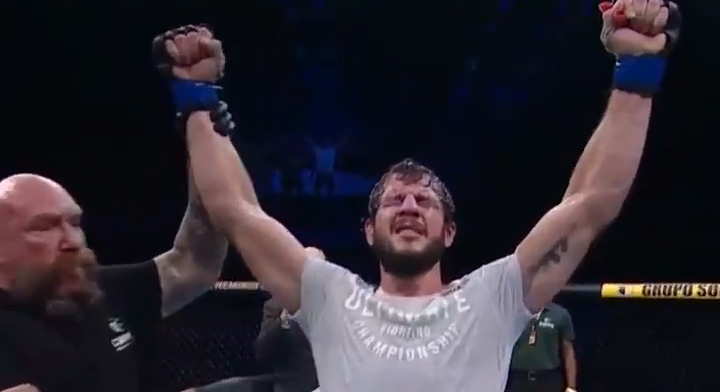 Walker begins to try and stand up as Krylov looks to get him back to the ground. Both fighters land small strikes against the fence as Krylov still tries to get Walker on his back. Krylov continues to look to advance as Walker still has his back against the fence. Krylov looks to grab the neck and Walker is up. Walker lands a big strike as the two separate and follows it with a jab. Krylov lands a good shot and wobbles Walker. Walker lands a big spinning back fast as Krylov takes him down again with under a minute to go. Walker continues to defend from the bottom as Krylov looks to land strikes from the top as the round comes to an end.

The second round begins and Krylov lands a good right cross and then takes Walker down. Walker lands a good elbow as he tries to get up. Krylov has Walker sitting down as he continues to look to advance position. Krylov is able to get Walker to his back and lands a  short elbow from the top. Krylov looks for a head and arm choke as Walker continues to try and get up.

Big shots from the top from Krylov

The final round is underway. Both men look exhausted and Krylov lands a good front kick. Krylov shoots for a takedown as Walker looks to defend. Krylov is able to complete the takedown but Walker ends up on top. Walker looks to control position and gets into full mount.

Krylov scrambles and gets back on top of Walker

When we say don't miss this fight, we mean…