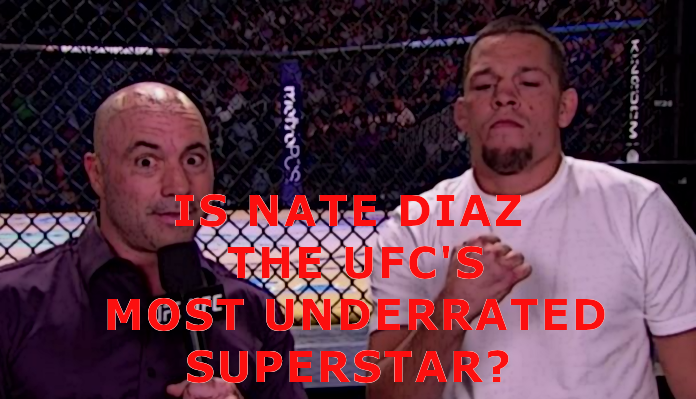 Diaz returned to the octagon after a three-year of layoff. He defeated ex-lightweight champion Anthony “Showtime” Pettis via unanimous decision. Diaz then called out Jorge Masvidal and praised him for being the best in the game right now. Joe Rogan took to his Facebook account to express his afterthoughts of the performance. With over 2.2 million followers, Rogan explained his appreciation for Nate after the win. He also suggested that Nate Diaz is a superstar.

What a crazy night! The @yoelromeromma vs @borrachinhamma lived up to the hype! Just an absolutely insane fight! The…

“I’m glad Nate Diaz is getting the love and respect he deserves,” said Rogan in the Facebook post. “I’ve been saying for years he’s the most under-appreciated superstar on the UFC roster. The roar when that man walked into the arena was second to none, and the fight was excellent.”

The Three Year Layoff Paid Off

The big win over Pettis allowed for the callout of Jorge Masvidal for the theoretical title of the “baddest motherf***er in the game” as conceived by Nate. As Rogan stated, the Diaz Army was in full effect and the crowd’s energy was in the palm of Nates hands. Every strike, taunt and post-fight word had the crowd begging for more from the Stockton native.

Not only is Joe Rogan a fan of Diaz, so is UFC President Dana White.

Nate showed the UFC brass that he is indeed a “needle mover.” White already declared that he would want to see the fight against Masvidal happen. However, no matchups have been made official from Dana’s desires.

With the fight world currently being Diaz’s oyster, what do you think should be next for the Stockton native? With so many options for big paydays, will Nate get the Masvidal fight? Calling out everyone on the roster was a bold move but at least Nate will get one of the fights he wants. As long as he has the Diaz Army with the UFC’s backing, the world will know that Nate Diaz is a superstar.