Dominick Cruz Accuses Henry Cejudo Of Trying To Avoid Him

Dominick Cruz is never far from a title shot at Bantamweight, so long as he is healthy. According to him, Henry Cejudo is the one standing in the way of these aspirations.

Cruz is on the logical man’s shortlist for the greatest Bantamweights of all time. His biggest struggles have, for the most part, been outside of competition, with injury. Since 2011, he has only competed four times, with the last three of those being in 2016. In those three bouts that year, he recaptured the belt, defended it, then lost it again. Although it is worth noting that this was only his second loss in 24 pro fights.

Since then, Cruz has been on the sidelines again, dealing with another injury. However, he is ready to return now, and is gunning for Henry Cejudo. Cejudo, who has reciprocated these feelings, is the current bantamweight, and former flyweight champion. Speaking with Brendan Schaub recently, Dom explained why he wants this bout.

“Well, I’m kind of in a Diaz situation, Nate Diaz situation, where I’m like, you know, i got Henry Cejudo calling me out, why would I want to fight anybody else?” Cruz said. “He’s the title holder, he’s got an Olympic title and he thinks he’s a ’25-pound and ’35-pound champion. That’s the guy to beat, and he wants to say that he’s the GOAT? you’ve got to beat me, bro. It’s plain, simple, period. no if’s, and’s, or but’s about it.”

“Realistically, fighting me makes you the best in the division if you can beat me,” Cruz explained. “but I think you know the truth. that’s why you’re going towards an Aldo that lost to (Marlon) Moraes, who you beat. That gives some comfort, where you got me you could face, after a three-year layoff, where I’ve looked very good before in the past, and I fight a little unconventionally, but the way I see it is we’re both coming off shoulder surgery and so that makes this an even fight to have.”

The angle that Dominick Cruz is trying to play, by saying they are both coming off shoulder surgeries is interesting. However, it seems unlikely that this is enough to counteract the long lay-off, combined with a loss in his last bout. Furthermore, there are other, more deserving contenders for Henry Cejudo to face. 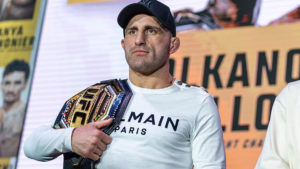