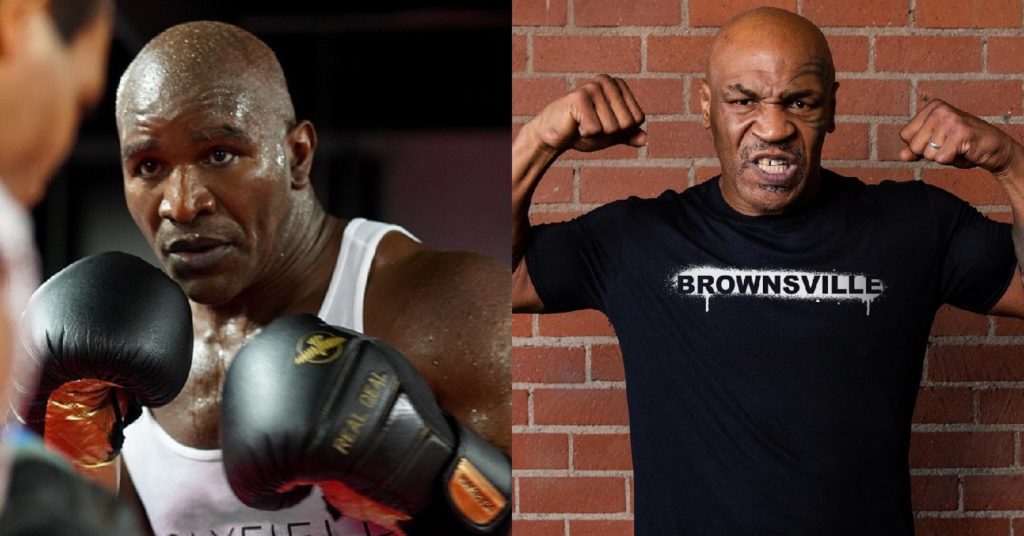 Before Mike Tyson fought Roy Jones Jr. in his boxing comeback, there was another opponent that many people wanted him to face first. That man was none other than his former foe Evander Holyfield.

It seemed almost serendipitous that Tyson and Holyfield revealed that they were both looking to fight again, at roughly the same time. The pair have faced off twice during the primes of their careers, with the latter of these bouts being the infamous ear-biting situation from 1997. Therefore it seemed like the perfect opportunity for these two legends to face off for a third time. In the end however, Tyson would face Roy Jones Jr., in an exhibition bout that saw the fan consensus leaning towards Mike as the victor, despite no official winner being named.

Now it seems that, after seeing Mike Tyson back in the ring, Evander Holyfield is gunning for a third fight with his former foe. The former heavyweight champ issued a press release calling for a fight with “Iron” Mike, something that Tyson was expressing interest in after the fight. Here he says that he previously tried to get the fight, but that there were problems on Tyson’s end that stopped the bout from coming together.

“My side tried to make the fight happen and we got nothing but excuses,” Holyfield said. (h/t Sky Sports) “Now I can see why he wanted a tune-up fight before thinking about fighting me.

“Roy Jones was a good local opponent for Mike, but a fight with me would be a global event and the only fight that anyone wants to see is a fight between us. There is absolutely no reason why we shouldn’t make it happen.”

“No more excuses. This is the fight that must happen for both our legacies. Saturday night you said you were ready to fight me, so sign the contract and get in the ring, Tyson. The world is waiting and it’s on you now. I’m ready.”

Now to be fair, there is a debate to be had about the long-term appeal of watching fighters compete past their prime. However if Mike Tyson wants to keep fighting, as would seem to be the case, Evander Holyfield might just be the perfect opponent for him. Given their respective ages and the history, it is a fight that would do well in the public’s eyes.