The co-main event of the evening brings a highly entertaining 265-pound match. Pride FC legend and the man with one of the most lethal left high kicks in the history of MMA, Mirko “Cro Cop” Filipovic, meets the former IFL Heavyweight champion Roy “Big Country” Nelson. The two already fought at UFC 137, on October 29, 2011, where Nelson picked a third-round TKO victory.

Our referee in charge for this epic rematch is Leon Roberts. The fight is underway!

Mirko looks so powerful at the moment. Nelson misses again, goes into the clinch, but Cro Cop defends and pushes Nelson to the cage, great uppercut.

Nelson on the fence again. And now Nelson rotates well and pushes Cro Cop on the cage, good underhook from Roy Nelson.

Why isn’t Leon Roberts separating them, no activity?! Mirko slips away and now pushes Nelson to the cage. Leon Roberts warns fighters – no head contact!

Great left uppercut from Mirko Cro Cop. Amazing punches to the body, Cro Cop lands like a pro, Nelson delivers a knee to the mid-section.

Fighters are in the center of the Octagon again. Nelson clinches up again, but Mirko delivers a brutal elbow and pushes Roy on the cage. An uppercut to the face, what a move by Mirko Cro Cop, and followed by a great left oblique kick to the body.

Nelson goes for a single-leg takedown, but Mirko defends!

Nelson holds Mirko’s right leg but Cro Cop defends well. An uppercut off the clinch again, the end of the round. 10-9 Cro Cop.

Nelson survives, both fighters in the center of the cage again. Low kick Nelson. Wow, a low kick from hell Mirko Cro Cop. And again! Left high kick attempt, I think it passed Nelson’s guard too, despite his right hand was high.

Wow, this was a good right hand by Nelson. Nelson pushes forward, and a big right hand. Good knee from the clinch from Roy Nelson.

Nelson lands a solid right uppercut. Nelson checked a low kick, it looked dangerous. Amazing movement by Cro Cop, who circles around the cage, and lands another low kick.

Big right uppercut Nelson but missed by a hair. Mirko is pressed against the cage now but escapes well. Mirko lands a great left straight punch to Nelson’s nose.

Nelson shoots in again, Mirko defends and pushes Nelson towards the cage. Great defense. Mirko is on the fence again.

Mirko defends well from his back, Nelson ended up in the full guard. Nelson does nothing, the referee should warn him. Nelson cannot even deliver a strike. An elbow landed by Roy Nelson. The end of the round, I’d say 10-9 Nelson.

Heavyweights goin at it! #Bellator216 pic.twitter.com/lSYEbo38CC

Mirko Cro Cop vs gets the W tonight in his Bellator Debut. 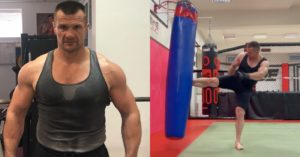 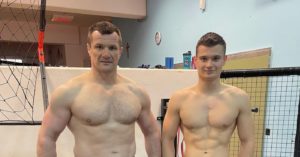 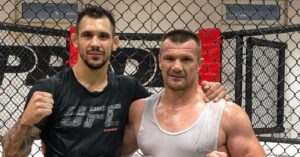 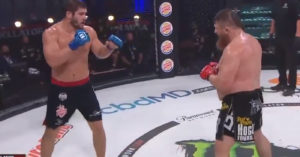 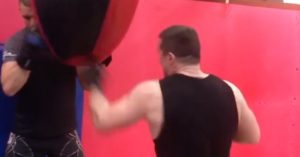 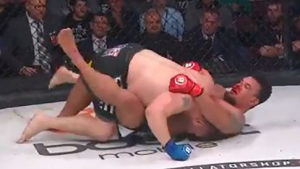