Listing the Top 10 BJJ Fighters in the UFC

Jiu-Jitsu is one of the original martial art disciplines that make up mixed martial arts. From the very first UFC event ever, BJJ was not only displayed but proven to be very dangerous. Especially against a defender that has no idea what a Jiu-Jitsu player has up their sleeve.

Brazillian Jiu-Jitsu players understand that there is a major difference between pure grappling and MMA grappling. However, most of the top jiu-jitsu players in the UFC got their humble beginnings draped in a gi as a white belt at a gym. As they trained extensively for years, they’ve attained skills from various gyms, countries, and masters.

More than likely, they’ve excelled in both competitions where a gi is required and also where it isn’t. The best jiu-jitsu fighters in the UFC today aren’t just people who can tap you out with their “go-to” moves.

These fighters have mastered the art of control, getting out of bad positions, and being able to finish fights from multiple positions. In most cases, opponents try to keep the fight standing against BJJ players by any means necessary. Additionally, BJJ players openly welcome their opponents to come to the ground with them.

Middle Easy has compiled a list of the 10 best BJJ players in the UFC. However, some criteria go along with the list:

Without further ado, here is what I believe to be the top 10 UFC fighters with the best Brazillian Jiu-Jitsu.

Of course, everyone knows Nate Diaz to be a durable west coast gangster who loves to throw hands. From time to time, fans can even catch Nate slapping his opponents in the face. However, Diaz is a serious threat to anyone willing to meet him on the canvas.

Although his stardom rose when he choked out Conor McGregor at UFC 196, his skills on the ground were apparent well before that. 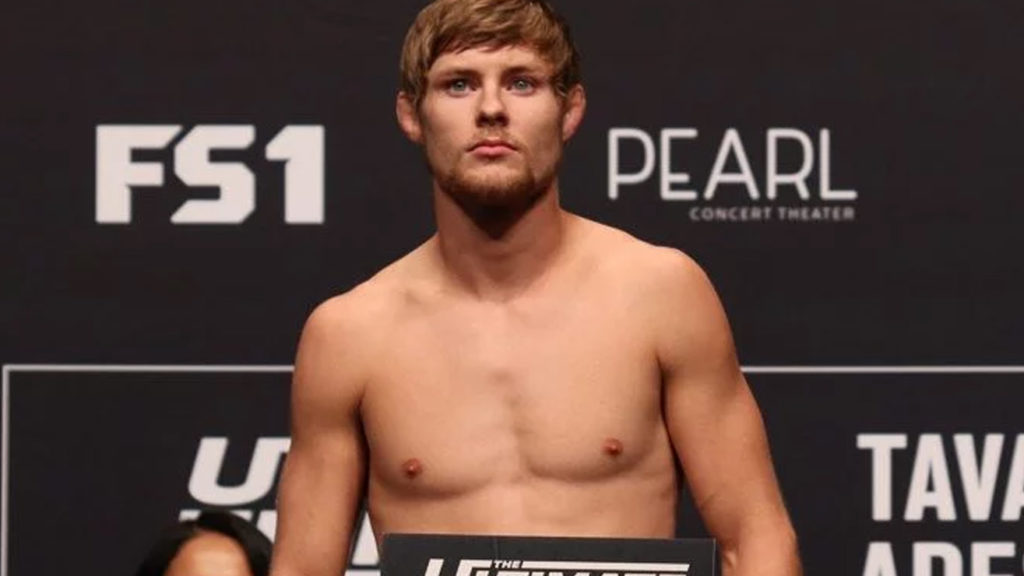 Although “Thug Nasty” is new on the scene, it doesn’t take away from his serious skillset on the ground. Although he only has 1 UFC submission victory, he’s also only had 3 total UFC fights.

However, in his entire professional career, 9 of his 12 wins have come via submission. For clarity, that’s around 75%. Mitchell is also only the 2nd UFC fighter in history to finish an opponent via twister.

Eventually, Mitchell will become a household name. And, if everything goes the way he plans, he’ll be doing it in camo shorts.

Like his teacher Matt Serra, Aljo is a problem for anybody on the ground in his division. Not only will Sterling out grapple nearly any Bantamweight on the planet, but he will also take them all down with ease.

Aljo has racked up 7 submission victories in his young career including a rare Suloev stretch at UFC 225.

The “Funkmaster” is a human backpack with the squeeze of an anaconda. Chances are, once he gets an opponent on the ground, they never get back up until the bell rings. Or, until they wake up. 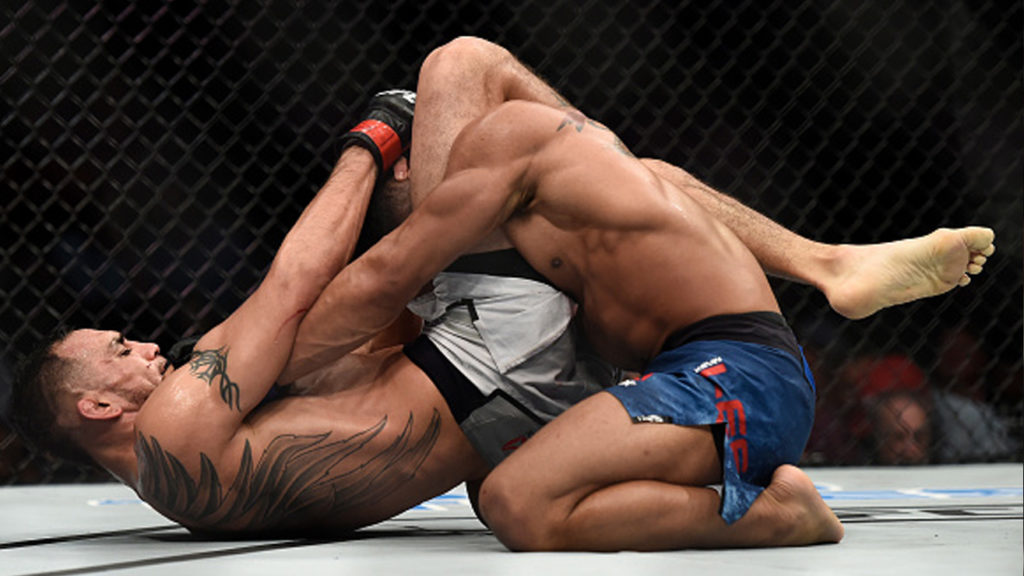 There is a shortlist of fighters in the UFC who are as comfortable on their backs as they are standing up in a fight. Tony Ferguson is certainly one of those fighters.

While Tony is elite in various areas of MMA such as cardio and creative striking, he also has one of the best ground games in all of the UFC. His quirky style tricks opponents into believing that they can hang with him. Until he finally clamps down and sends them to dreamville.

Ferguson probably has the best D’arce choke is all of the UFC. And, if fighters think they’re legs are safe… beware. Tony has been known for picking ankles and snatching legs from his lighting fast Imanari roll.

Mackenzie Dern only has 1 UFC submission victory. However, Dern also only has 7 professional bouts under her belt. With 4 of those 7 victories coming by way of submission, it’s safe to say that Dern has earned her place.

Through the course of her grappling career, shes managed to rack up being a BJJ gi and no-gi world champion in the same year. Although she is new to MMA and an even newer mother, when Dern decides to come back, she’ll add to her submission win total.

Not every fighter is about creating controversy or stirring the pot to sell fights. Some are comfortable with themselves and here to provide a technical spectacle. Ryan Hall is simply one of the best BJJ players in the UFC today. Although he’s only had 4 fights in the promotion, his accolades speak for themselves.

Hall managed to make BJ Penn tap. To put that into perspective, in BJ’s 32 fight Hall of Fame career, Ryan Hall is the only man to hold a submission victory over him.

Hall often baits fighters into coming down to the mat. From that point on, the chess match starts and Ryan never loses. Ryan still has a long way to go in his MMA career. After all, he is still fairly new to the sport with only 9 professional fights. 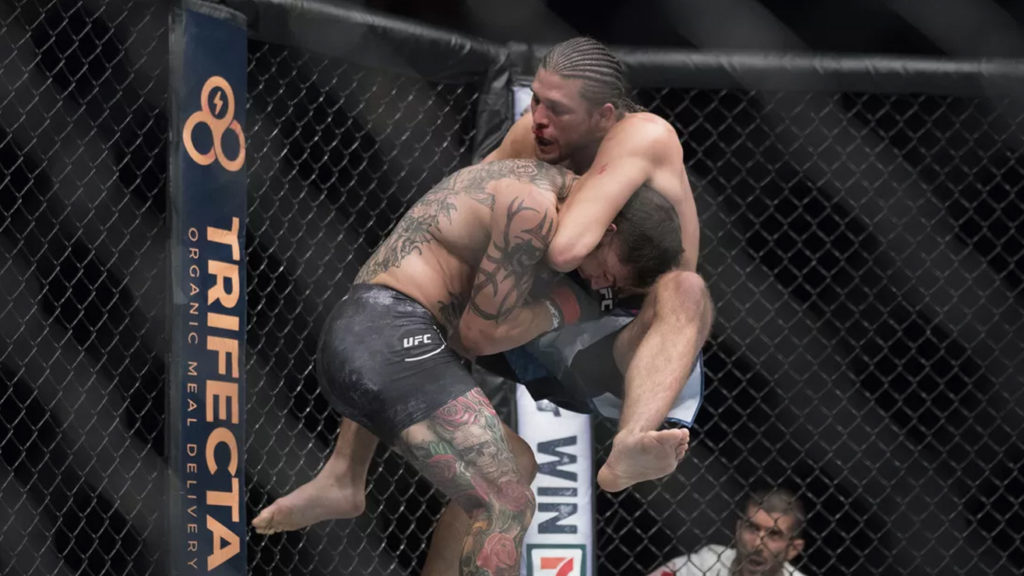 This list wouldn’t be complete without adding a man whose nickname is based on a submission move. “T-City” snatches necks. Short and simple.

Ortega has managed to earn a black belt from the legendary Gracie family and it shows. It would be a difficult task to find someone with a tighter squeeze on their opponent’s neck other than Ortega.

Brian has won with his trademark triangle choke 4 times so far in his professional career. The scary fact for his opponents is that Ortega is big for the lightweight division and is only 28 years old. 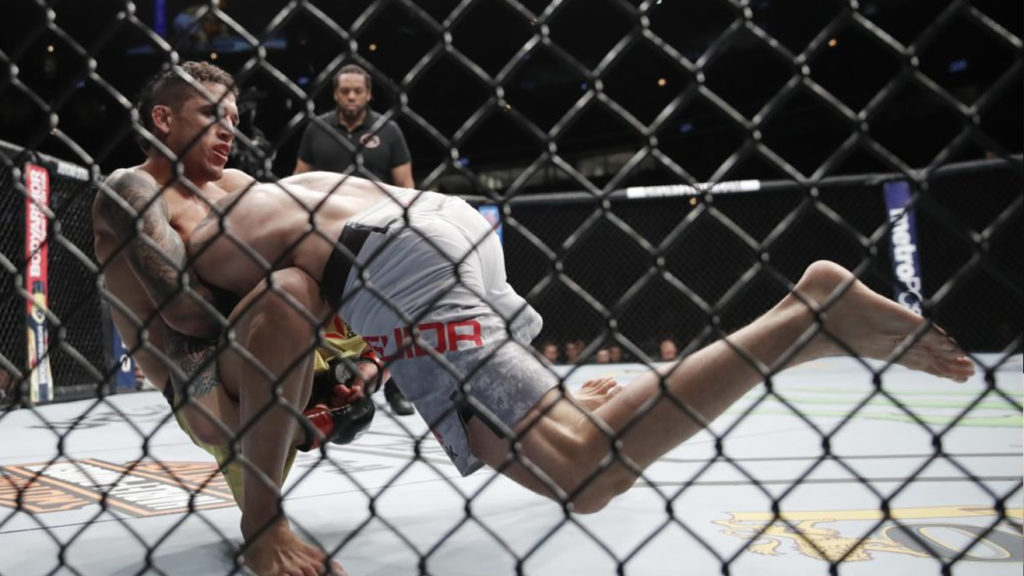 Charles Oliveira has more professional MMA fights than years spent on this Earth. He also has a lot of the UFC’s records when it comes to submission victories.

Charles has won submission of the night on 3 separate occasions in the promotion. Furthermore, Oliveira has the most submission wins in featherweight history (6) and the most in all of the UFC (13).

With all of those accolades, Oliveira is still only 30 years old. Which means he has plenty of time to pile on more victories, bonuses, and sick submissions. 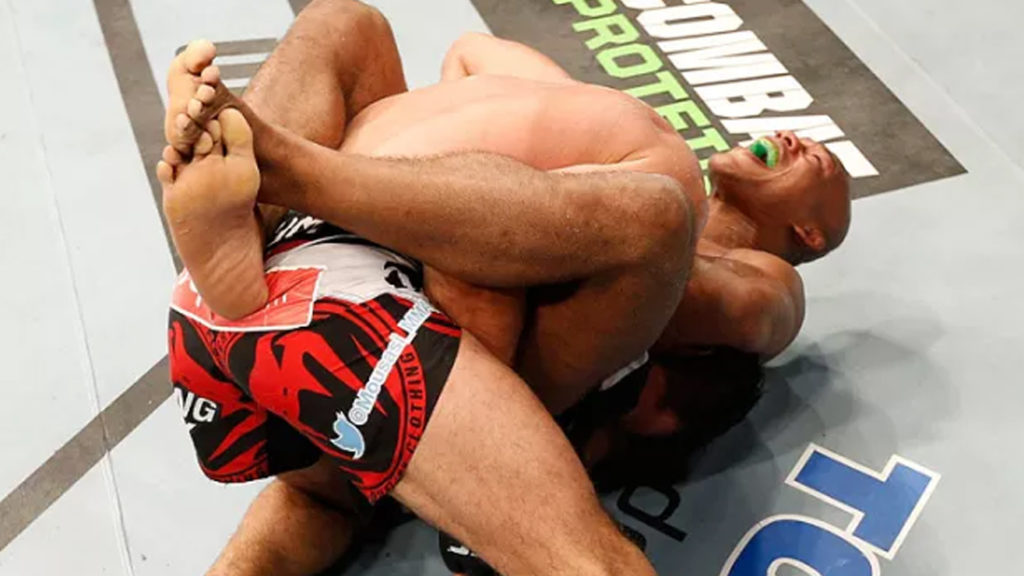 Jacare is an absolute legend in both MMA and the grappling world. Throughout his entire MMA career, Souza has submitted 14 opponents. He is an eight-time World Jiu-Jitsu Champion. Some of these competitions earned him gold medals in the Open-weight class in 2003, 2004 and 2005.

Simply put, no matter your size, chances are if you grapple with Jacare, you’re going to tap. The likelihood of an MMA opponent tapping out Jacare is slim to none, as it has never been done before in his 35 fight career.

Souza is known throughout the MMA community as putting the clamps on everyone. Eventually, he’ll be immortalized in the Hall of Fame for it.

There is absolutely nobody better than Maia in regards to technique, pace, and transitions. After an opponent touches the canvas and gets in the claps of Maia’s grip, it is over.

Demain Maia has tapped out some of the best grapplers that the UFC had to offer throughout his 37 fight career.

One of the most impressive feats about Maia’s BJJ journey is that it took him only 5 years to receive his black belt. Jiu-Jitsu seems to be as natural for Maia as walking is for most humans. Demian will always be regarded as one of the best BJJ players that the UFC has ever seen, if not the best.

With every list comes controversy. So, bring it on. Sure there will be names missing but, there are only 10 slots. Names like Rose Namajunas, Rani Yaya, and Jussier Formiga all deserve consideration as honorable mentions.

With that being said, let us all look forward to an upcoming 2020 filled with strangles.