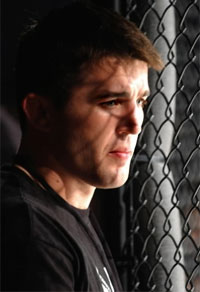 Lance Armstrong is one of the few people out there that rides his bike more than me. When he gets bored, he does laps around France while people stop everything they’re supposed to be doing just to cheer him on from the sidewalks. The closest thing to that sort of roadside encouragement I’ve gotten in NYC was people waving their middle finger at me for blowing through red lights with a front basket full of groceries. One of those people may or may not have been Chael Sonnen, who’s officially grown tired of talking about Anderson Silva and found his next target to verbally-fragment. Check out what he had to say about Lance Armstrong on Pro MMA Radio:

“When you screw up, you have to own it. That stuff really gets under my skin. Take Lance Armstrong. Lance Armstrong did a number of things and he gave himself cancer. He cheated, he did drugs, and he gave himself cancer. Well, instead of saying ‘Hey listen, I cheated and gave myself cancer, don’t be like me.’ He actually made himself the victim and then went out and profited something like $15 million dollars from this ‘Hey, poor me, let’s find a cure for cancer’ campaign instead of just coming clean and saying, ‘Look, here’s what I did, I screwed myself up, and I hope people learn from my mistakes.’ You just watch these guys and can’t help but think, God, what a fraud. You got the whole Michael Phelps being a pothead thing too. I’m just glad I’m in the business I’m in so I can get them in the cage and kick the crap out of them.”

This isn’t the first time that people have accused Lance Armstrong of cheating and/or utilizing performance-enhancing drugs, and unless you follow cycling, you probably didn’t know that Lance was capable of his own gangsteresque responses like this one. Armstrong has yet to respond because he’s probably in a hot tub full of French lingerie models massaging out his Tour de France cramps for the next few weeks. Once he does issue a response, we’ll keep you up-to-the-minute on the MMA/Pro-Cycling beef that Chael Sonnen just started. [Source]

For more MMA News, Rumors and Updates follow the Red Monster on Facebook, Twitter, YouTube and Instagram
FacebookTwitterFlipboardRedditWhatsAppPinterestLinkedIn
If you watched Bloodsport when you were a kid, then you will appreciate this GSP mash-up
← Read Last Post
If you knock out a girl in the middle of the street, try not to do it in front of Roger Huerta
Read Next Post →
Click here to cancel reply.