Semtex Wants to Send Kos to the Barber Shop 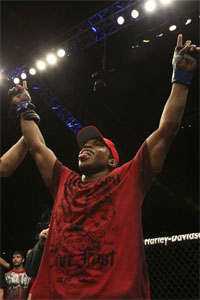 What do Fraggles and MMA have in common? Well, if you ask Paul Semtex Daley that answer would be Josh Koscheck and his hair. I always thought Fraggles were little lovable happy squishy puppets, but I guess Semtex doesn’t feel any love for the fraggle. In fact, Semtex flat out does not like Kos because of his do. Daley has found it in his heart to try and help the guy out with a ‘Get Koschek a new haircut’ competition on his website. Although the official competition hasn’t been posted at Semtex.tv just yet, he has been unveiling his plans on Facebook, the UG and in a recent interview with Sidecontrol.co.uk.

What can we expect on fight day? — It’s going to be an entertaining fight, but I predict it being short and I predict Koscheck getting knocked out quite brutally to be honest with you, ‘cos I don’t like the guy ‘cos his hair’s shit! (laughs0]

I heard you called him a fraggle. — He is a fraggle! I’ve got a few competitions coming up, so look out on Facebook and my website. ‘Get Koscheck a new hairstyle’ because the one he’s got is just not working for him.]

Has he responded to this? — He hasn’t responded yet, but I can imagine in the build up he is going to say some kind of shit, but he can’t hold a torch to me, he’s just not a funny guy – unless you’re looking at his hair! (laughs) In which case it’s hilarious!]