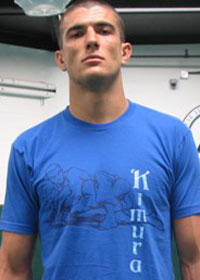 Hélio Gracie was the first (and only) Gracie to actually use the letter ‘H’ to pronounce the ‘H sound’ at the beginning of his name. Somewhere along the Gracie family line, everyone started to use ‘R’ as the first letter of their name, yet insists that the beginning of their name begin with that infamous silent ‘H’. It makes you wonder if Hélio Gracie could be written as ‘Rélio Gracie’ and still have that ‘Ha’ sound. I woke up today with that epiphany and the only thing I can think of is the day when someone names their kid ‘Randsome Gracie’. Ramburger Gracie would be a good name also. I better get on with the story. Look at the picture of Rener Gracie, the dude does not look pleased with my Gracie name game idea. My bad Rener.

Oprah Winfrey is offering a chance to have your own show on her new network which plans to launch in the immediate future. On Oprah.com, she is accepting television proposals that can be voted by members of the ‘O community’ (I’m sure all of you are card-carrying members). Coming in first place with over 672,000 votes is Rener Gracie who has proposed a television show to protect American youth from bullies. Here’s the summary he included in his submission (pun not intended, but since it’s sort of cool, I’ll front as if it was).

VOTE NOW TO SAVE THE AMERICAN YOUTH! Every day, hundreds of thousands of kids are terrified to go to school out of fear of bullies. These kids are depressed, have no self-confidence, and unfortunately, many of them are borderline suicidal. On our TV show, the Gracie Brothers will sweep the nations schools to find the children who are most victimized by bullies. This children will be brought to California, where, over the period of several weeks, the will be “bullyproofed” from the inside out. By empowering the children – physically, mentally, and emotionally – we will give them the confidence to take a stand against bullies so they can take control of their lives. Without confidence, a child has no chance at success, and on this show we are going to make sure that every child gets a fair chance.

If you check out the site, you can see Rener Gracie’s video clip of him convincing Oprah Winfrey to make him the next Dr. Phill (and it looks like it’s working). Coming in second place is some dude named Will who wants to have a show that’s about fashion and acting. I think the choice is clear folks. [Source]