Rashad Evans Guarantees That Cormier vs. Jones Trilogy At 265-Pound ‘Would Be A Lot Different Fight’

Jon Jones and Daniel Cormier are two of the biggest rivals in the sports of MMA.

‘Bones’ and ‘DC’ have fought twice previously, with Jones winning the bout both times. In the first outing, Jones won via decision at UFC 182 back in 2015. Shortly after the victory, Jones ran into legal trouble which led the Cormier to fight for a vacant title and winning it.

‘DC’ held the gold for two years. They fought for the second time at UFC 214 back in 2017 where Jones dethroned Cormier via third-round KO; however, the results ruled to no contest after ‘Bones’ popped for a banned substance. Seems like a third run is possible before ‘DC’ walks away from MMA.

Jones received 15-month of reduced suspension and Cormier went on to defend the title once back in 2018 and then in July of same year defeated Stipe Miocic at heavyweight. Cormier forfeits the 205-pound gold due to inactivity in the division.

Jones returned last year despite a scandal of picogram incident and won the vacant light heavyweight title back after beating Alexander Gustafsson and afterward successfully defended against Anthony Smith.

Earlier this year Jones teases a move to heavyweight and seems ready to take on a challenge but needs more incentive from promotion to pull a trigger. However, considering Cormier’s perfect record at heavyweight, it’s a big risky decision for ‘Bones’ to fight at heavyweight.

“I think if Jon Jones did fight DC at heavyweight it’d be a totally different fight. I think Jon Jones knows that, he is a very smart fighter,” Evans said. “I think he has a better chance of beating DC at 205 because when DC makes 205, it’s not only the fact that he’s gotta face Jon Jones’ skills — because that’s one thing in itself.”

"It'd be interesting to see the matchup at heavyweight because I guarantee it'd be a lot different fight." — @SugaRashadEvans to @MieshaTate and @RyanMcKinnell on a potential third showdown between Jon Jones and Daniel Cormier pic.twitter.com/fWDHPXfOuw

“But then he has to worry about facing himself on a physical sense. How much did he deplete his body during the weight cut?” the former light heavyweight champion continued. “That seems to be what causes the damage later on in the fight when he can’t absorb a shot to the head because he doesn’t have enough fluid in his head because he’s dehydrated. That’s what happens when you cut too much weight.”

These are handicaps Cormier would not have in the heavyweight division. “At heavyweight he is a little bit more durable. He has this strength at heavyweight that he doesn’t have at 205,” Evans assured. “It’d be interesting to see the matchup at heavyweight because I guarantee it’d be a lot different fight.”

We agree with Rashad’s assessment on Jones vs. Cormier third bout at heavyweight, but it’s hard to bet at this moment, after all, Jon is the greatest pound for pound fighter of all time.

“DC” is currently set to meet Stipe Miocic in a rematch at UFC 241. In the meantime, Jones is slated to face Thiago Santos at UFC 239. 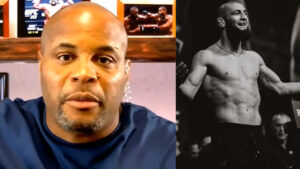 1 thought on “Rashad Evans Guarantees That Cormier vs. Jones Trilogy At 265-Pound ‘Would Be A Lot Different Fight’”