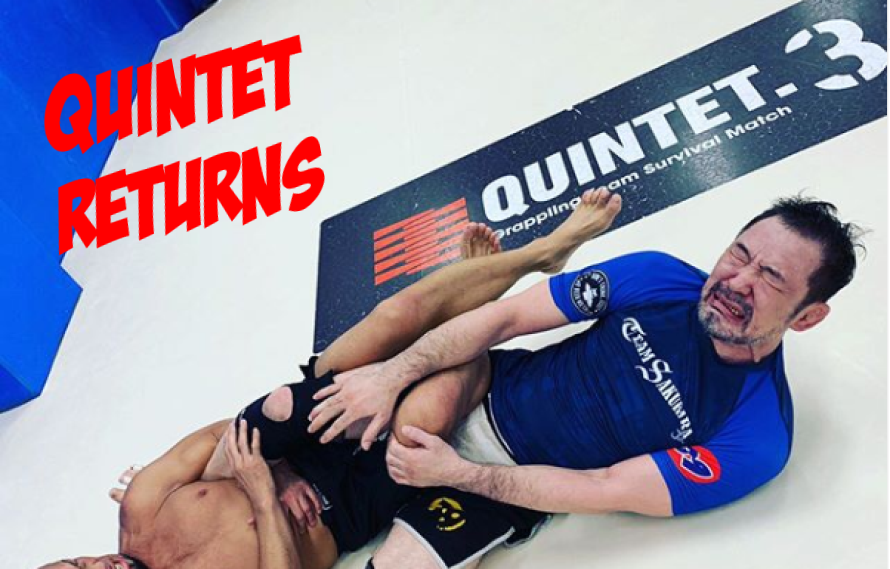 Quintet grappling is quickly becoming one of the more interesting iterations of BJJ . Now they are looking to bring a more nostalgic touch to their next event.

Quintet was started by MMA veteran an Jiu-Jitsu ace Kazushi Sakuraba with an interesting premise. He wanted to pair grappling tournaments, with a team sport. Therefore he took various BJJ gyms, and pitted them against each other, with the goal to see who’s school is best. It was a fun affair, and was even streamed on UFC Fight Pass.

Well it would appear that Quintet is making a return soon. Although they are keeping the same team-based set-up, they are mixing things up. As in, they are bringing mixed martial artists into the event.

First announced during the UFC 244 PPV, Quintet Ultra will take place sometime in December. Additionally, it would seem that the event is going to feature athletes from multiple Zuffa-owned MMA organizations. Subsequently you will see athletes who have compete under the banners of the UFC,PRIDE,theWEC, and Strikeforce going head to head in BJJ competition.

Currently there are few official details known of the event. However, it is clear that Quitent Ultra will be happening in Las Vegas. Moreover, it is speculated that it will go down the same week of UFC 245. In addition to that, it seems likely that Sakuraba will head the PRIDE team. Although no other athletes are currently announced.

Quintet Ultra should be a ton of fun, with these old school favorites being in the mix. There were some really talented grapplers who competed in these organization through the years. It will be a great event to tickle that bit of nostalgia in your gut.

Conor McGregor Takes DNA Test, Proves He Is Not The Father Of Alleged Love Child
Read Next Post →
Click here to cancel reply.