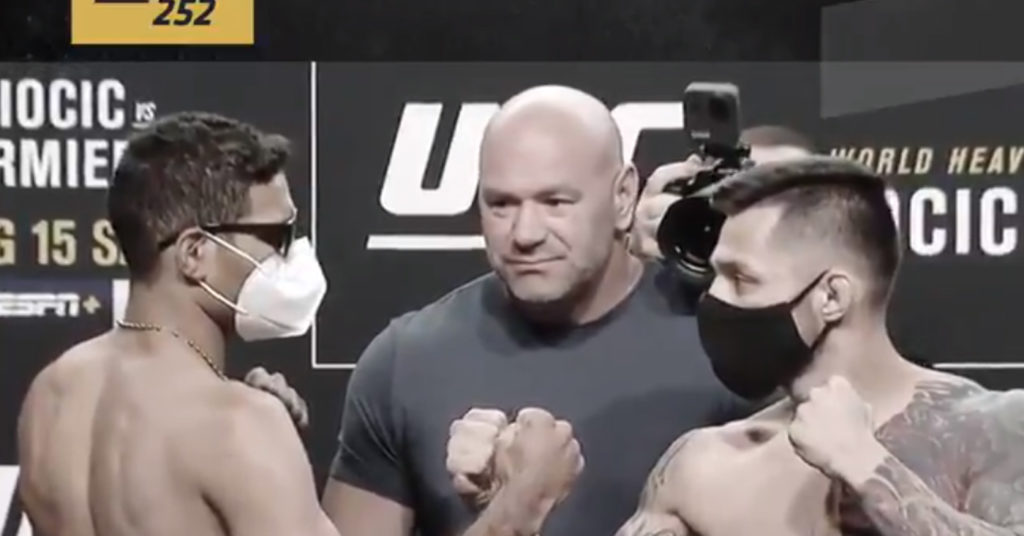 Up next in Vegas, is a fight in the featherweight division. Gilbert Burns’ younger brother Herbert (11-2) faces off against Daniel Pineda (18-11). Burns missed weight by 3.5 pounds.

The fighters touch gloves and engage right away. Pineda lands a right hand and blocks a kick from Burns. Burns gets the takedown but Pineda gets back up and lands an elbow. Pineda lands a body blow and gets a takedown of his own. Pineda maintains top position and lands some ground and pound. Pineda gets to half guard. Nice right-hand lands on the ground for Pineda. Big elbow lands for Pineda, h then pins Burns to the fence. Body shots land for Pineda. Pineda keeps Burns on the ground and keeps landing some ground and pound. Another elbow from Pineda as the round ends.

Burns starts off with a leg kick and gets a takedown right away. Burns lands some ground and pound. He gets the back position as Pineda tries to get back up. Burns gets the full mount position. Pineda scrambles and gets back to his feet for a moment but Burns gets takes his back. Pineda reverses the position and gets on top. Pineda lands some elbows and gets the crucifix position,. Pineda lands some more elbows while Burns tries to escape. And the referee stops the fight!

Official results: TKO win for Daniel Pineda at 4m27s of the second round.