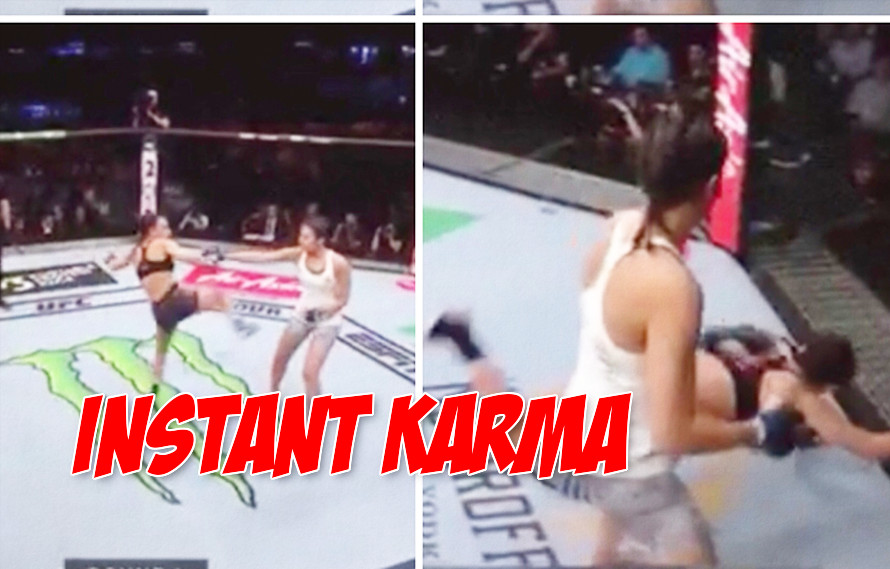 Bless you Nadia Kassem for being dumb enough to try this.

UFC 243 will be remembered for a lot of things. An awesome Aussie crowd, Israel Adesanya becoming king, but the MMA world should not forget Nadia Kassem trying to cheat to win.

Rest in Peace Eddie Guerrero, the MMA world is sorry Kassem soured your name. At UFC 243, Kassem tried to lie, cheat, and steal her way to a head start. How?

This is the UFC. As real as it gets. The Super Bowl of mixing your martial arts. Nadia Kassem really tried the fake glove trick on Ji Yeon Kim. Fake tapping gloves to start the round and then strike your opponent instead.

Due to Kassem being very bad at cheating, after she faked out Kim, she went for a side kick.

Not a big right hook or head kick. A simple side kick that says “Hey, I’m a huge asshole but I’m not very good at it”.

Want art in your MMA? Here it is. Kassem faking sportsmanship and then Ji Yeon Kim popping right in the face for it. Not just any punch in the face, a clean shot to Kassem’s chin that clearly rocked her. And it sent her crashing to the floor.

Love that type of karma from the Fight Gods.

A story in three parts.

Ji Yeon Kim tees off, then puts Kassem away with a nasty body shot! #UFC243 pic.twitter.com/WA1VJRW2Bs

Alexander Gustafsson: 'I'm Not Certain There Is Someone' Who Can Beat Jon Jones
Read Next Post →
Click here to cancel reply.