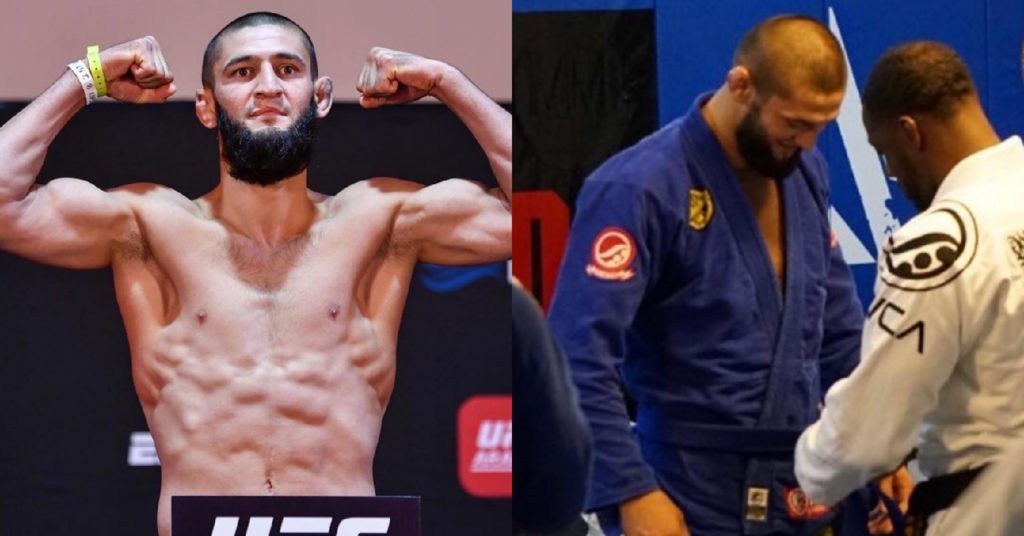 UFC welterweight Khamzat Chimaev may have had an easy run so far in the promotion, but he is still working hard in the gym. This was evident recently when he earned his blue belt in Brazilian Jiu-Jitsu.

Few people have the type of UFC start that Chimaev has had. The unbeaten Russian fighter dominated John Phillips in his debut, a fight which took place at middleweight. Then just ten days later, he competed at his normal class of welterweight, again blowing the doors off of his opponent. It was the quickest back-to-back UFC wins ever, and he officially only absorbed two strikes between both fights combined.

For someone as dominant in grappling as Khamzat Chimaev has been, one would think that he must have a black belt in Brazilian Jiu-Jitsu. However this is far from the case, as a recent YouTube video showed. Here the Russian prospect can be seen doing some BJJ training, before being promoted from white belt to blue belt. It was something he was excited for, but nervous about at the same time.

“I’m so nervous! I’m not this nervous when I fight!” Chimaev said. “Thank you to everyone, it’s so much fun to train with everybody. Now I will try to get more submissions with this!”

For those who are unaware, the blue belt that Chimaev earned is the second promotion in BJJ. It takes around 2-3 years to get, with dedicated focus and learning. However it is clear that this is not a representation on how good Kamzat is on the mats, as we have already seen quite clearly in the UFC.

Congratulations to Kamzat Chimaev on earning his blue belt. This is a big accomplishment that demonstrates his growth and learning in the sport, which will surely translate to better success in the Octagon.

Dana White Confirms BMF Belt Up For Grabs In Masvidal vs Diaz 2
Read Next Post →
Click here to cancel reply.