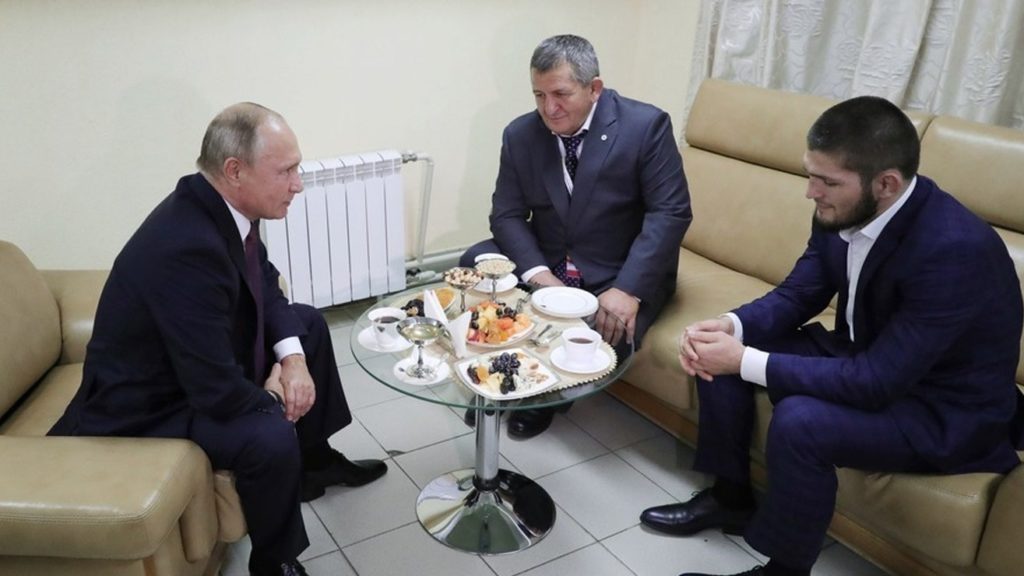 After scoring a dominant win over Conor McGregor in the main headliner of UFC 229 on October 6 in Las Vegas, undefeated Khabib Nurmagomedov told the media at the post-fight presser that he had received a congratulatory call from Russian President Vladimir Putin.

Nurmagomedov has since apologized for the post-fight brawl and said his father and trainer, Abdulmanap, would “smash me when I get home”. Putin said to Khabib’s father that don’t be too harsh on your son for post-fight chaos where ‘Eagle’ leaped over cage fence and attacked Mcgregor’s teammate and coach Dillon Danis that sparked riots.

“I will ask your father not to punish you too strictly, because you achieved the main task, worthily and convincingly,” said Putin (H/t rt.com)

Here Putin referring to Khabib’s father Abdulmanap recent comments on post-fight melee drawing up a harsher punishment for his son than the ones from the UFC or NSAC.

Khabib who returned to his hometown Dagestan and received a heroic welcome from a crowd on Monday.

Before he returns to action, Khabib has to solve the legal issues with Commission first. A rematch with Mcgregor could be very well expected, or he can put his gold on the line against Tony Ferguson.