Jose Aldo: ‘I Think There’s A Real Possibility’ Of Going To 135 For Cejudo Fight 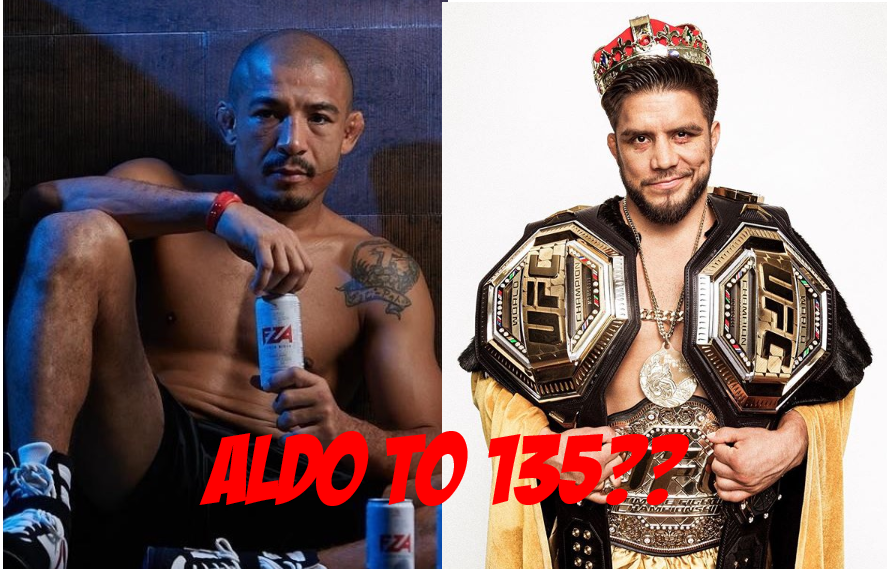 Jose Aldo once reigned over the Featherweight division for years. However, now he is looking at a drop in weight for another chance at UFC gold.

Aldo has had a tough run at featherweight lately. Initially, he lost his UFC Championship to Conor McGregor, and was able to bounce back in an interim title bout with Frankie Edgar. However, since then he has lost 3 of his last 5. Most notably were two back to back losses to the current champ Max Holloway. So it seems his chances at UFC Featherweight gold are behind him.

Nevertheless, this does not stop him from looking to change weight. He recently spoke to Combate about a potential move in weight, but not the direction you may think.

“I sat down with everybody, did a study, and I think there’s a real possibility I can make 61kg [135 pounds]. This is the new division I want to move to, and I’m asking for the title shot right away. That’s what matters for me now. Cejudo said he’s open to (fighting) anyone, so I’m open to that. I want the opportunity to fight against him and beat him.”

However, he is very respectful of Cejudo.

“He’s an Olympic champion, a great athlete, and I respect his history a lot. He deserves everything he’s winning, he has his merits. If the UFC thinks it’s a great fight, I think they’ll want that, it’s a huge challenge. He’s been talking after defeating (Marlon Moraes) that he was open to fighting big names. Since he’s open, it’s the green light.

Nobody expected him to beat (Moraes) on the feet, you have to respect that. To me that’s great, it’s a good size for me. he has a fighting style that please me, that matches up well with my game. If it’s against him or not, I think about being adapted to the weight, fast and strong, which will be my differential in this division.”

It is hard to believe Aldo could safely make the 135lb weight class, considering his notorious struggles making featherweight. Subsequently, many thought he would look to move up in weight instead. However, Aldo likely sees himself having a better chance at bantamweight, as opposed to the deeply stacked lightweight division.

All things considered, if Jose Aldo can safely make the weight, this move could be interesting to see. Although a warm up fight may be warranted, before a fight with Cejudo.

Street MMA: If you let your guard down, you might eat a headbutt & a comeback
← Read Last Post

Rizin 18: Three Reasons To Be Absolutely Hyped Beyond Levels Of Human Comprehension
Read Next Post →
Click here to cancel reply.