Despite their rivalry, John Dodson names Demetrious Johnson as the pound-for-pound greatest fighter of all time.

John Dodson believes his longtime rival Demetrious Johnson is the pound-for-pound greatest mixed martial artist of all time – even above his training partner and teammate Jon Jones.

Dodson was recently interviewed by TMZ Sports to catch up on his combat sports career, including his recent transition into bare-knuckle boxing.

The former UFC title challenger had a successful first outing in his BKFC debut, scoring a knockout this past weekend.

During the interview, Dodson got the opportunity to reflect on his UFC career, including his storied rivalry with former UFC flyweight king Demetrious “Mighty Mouse” Johnson.

Dodson and Johnson are very familiar with one another. They’ve shared the Octagon twice, with Johnson coming out on top both times.

Despite the fact that Johnson has trained with another mixed martial arts great regularly, Jon Jones, he says he still lists his former foe as the greatest the sport has ever seen.

“To be honest with you I put him above Jon Jones,” John Dodson said. “And I know Jon Jones is my teammate and training partner, but – not even saying it because he beat me – but Demetrious Johnson is the most well-rounded mixed martial artist that the world has ever seen.

“He is the only one that I’ve known that’s rounded so well between his wrestling, his striking, also in his jiu-jitsu.

“He’s so creative with how he gets submissions, how he wants to go out and finish people, and he’s just a very intelligent fighter.”

While some within the MMA community also dub Johnson as the GOAT, others seem to overlook him for some reason. Perhaps it’s due to the weight class Johnson competes in, or maybe even the fact that he doesn’t talk trash.

However, Dodson explains that the fact that Johnson stays true to who he is is one of the reasons he respects him so much.

“He doesn’t do anything that’s too vicious, or there’s no comeback story. Demetrious Johnson has always just been doing what he does best, and he continues to grind and succeed and be who he is.

“He hasn’t changed who he is and I always looked up to him for how he’s done things. He just sits there, loves his family, plays video games, and stays true to who he is.” 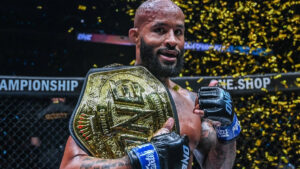 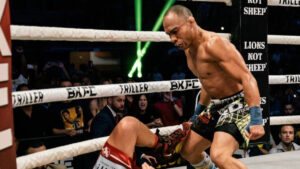 John Dodson On Successful BKFC Debut: ‘I’m Still One Of The Most Violent Individuals In The World’