Alright, what the hell is going on with Floyd Mayweather? Is he just in retirement and doing some promotion because that’s what he does, or is he really serious about this Conor McGregor beef? Either way, he dialed up none other than Nate Diaz on FaceTime to give him props and tell him he’s going to finish what Diaz started.

Before that, Mayweather put up $10k, yes, that’s right, TEN THOUSAND DOLLARS to anyone who put the best caption on the footage of Diaz choking out the loud-mouthed Irishman. …Is that the most expensive meme ever in the history of memes? Either way, even Khabib Nurmagomedov got in on the action. 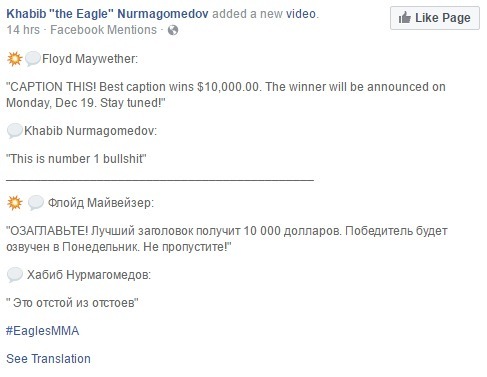 Mayweather talks to Diaz about potentially training in Vegas with him and hooking him up with some Money Team Mayweather merchandise. Maybe this is also an indication of Diaz wanting to transition into boxing, something his brother always talked about but never made the jump. One thing is for sure, Mayweather is definitely a fan of Diaz, who he said ‘goes hard in the paint’. New nickname? Diaz should run with it, there needs to be more creativity in MMA fighter nicknames.

Represent, Mayweather. Represent. He needs to put on the black shirt with the ‘R’ if Diaz puts on some Money Team. Now THAT’s a collab.

A Lesson in Street MMA: Fight by that pond, feel free to punch KO your opponent into the water
← Read Last Post

The Incredible, Completely Fucking Illegal Video of All Main Card UFC KOs and TKOs of 2016
Read Next Post →
Click here to cancel reply.