Bethe Correia announced to her fans on Istagram that she just signed the bout agreement for her last fight. 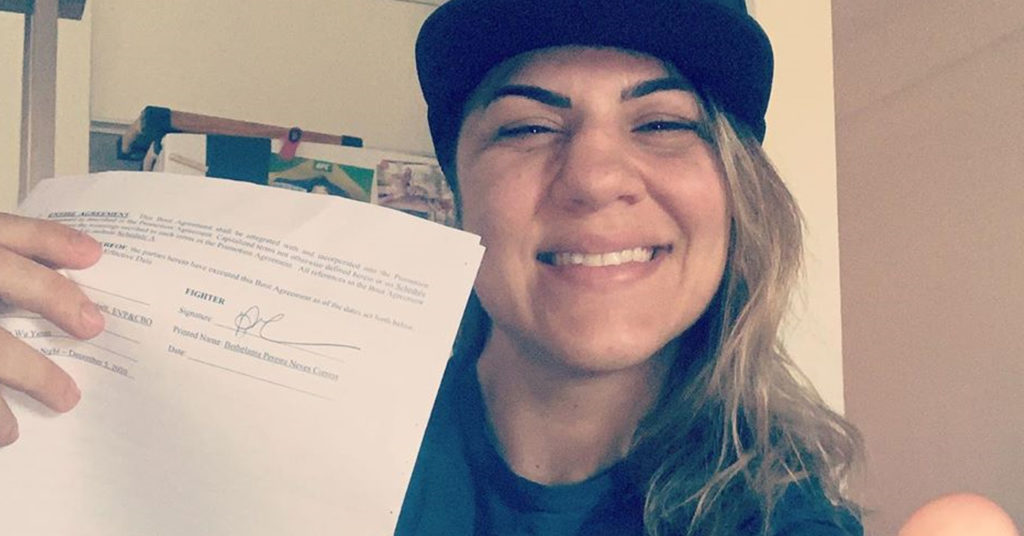 UFC bantamweight contender Bethe Correia (11-5-1NC) will return to the UFC for one last fight.

The Brazilian’s contract with the UFC wasn’t renewed following her loss to Pannie Kianzad. But it seems that Correia has come to terms with the promotion to fight Yanan Wu on the December 5 card. The news was first reported by AGFight’s Diego Ribas and later confirmed by Correia on her own Instagram account.

Correia seemed very adamant about the respect with which the UFC always treated her and the difficulty of the decision she had to make. She also expressed her gratitude for the career she’s had.

“Only a fighter knows the time to stop and follow other paths… Only a fighter and their allies know to tell apart the lies from the truth from what the media puts out. Yes! This will be my last fight and it could not be at any event other than the one and only @UFC
Countless lies have been told out there, but I remained centered! I know who I am and I know my story. I have a strong and daring personality that has been the essence of my career and has added many rilvaries that strengthened Women’s MMA. What I leave behind me is my legacy of a fighter who has a bold posture, presentation and unique celebration style in the fighting world. A personality that makes many curious to know more about me. It’s not by chance that #betheeffect is out there. Love me or hate me, in the end everybody wanted to stop to watch me fight. I reached Pay Per View record numbers that back then had not been reached for many years. I have fought the very best and I always made the news. I am certain that I have left my mark and now it’s time to let a new generation arise. And I know that I have taught both good and bad lessons. My very last fight will be at the best in the whole world… Where I dreamed and seeked to fight. This December I will be in the UFC octagon. I will cherish every moment of it and I know I’ll miss it! I’m incredibly thankful to the UFC for the recognition of my career and history, they have never denied me a request.”

Correia is a former title challenger. She entered her bout against Ronda Rousey at UFC 190 as an undefeated contender and lost by Knockout. She has since won just two of her last seven fights.