MMA manager Ali Abdelaziz reveals what his client, Henry Cejudo, needs to do to earn a featherweight title shot.

Ali Abdelaziz knows exactly what his client, Henry Cejudo, needs to do in order to earn a shot at the UFC featherweight championship.

Ali Abdelaziz lays out the blueprint for Henry Cejudo

Recently, Abdelaziz was interviewed by ESPN’s Brett Okamoto and asked about his recent meeting with UFC executives. In regards to Cejudo, Okamoto asked if the topic of Cejudo’s desires to chase the 145-pound title came up.

Abdelaziz said that Cejudo will have to prove to the UFC that he’ll be a fighting champion before getting that shot. That would mean returning to bantamweight to fight the likes of Aljamain Sterling and TJ Dillashaw.

Of course, if UFC president Dana White is given any doubt that Cejudo will leave again after winning the featherweight title, he can kiss any thoughts of a title opportunity goodbye.

“Yeah, of course, Henry is going to talk about it. But one of the things I said, at the end of the days these guys do big business, and they’re big boys who wear big boys pants. You come there, you go in and you beat TJ, you beat Aljamain, and you ask for 145 –  They gonna give it to you.

“You understand? You’re gone for two years and come back and beat the best in the division – I know these guys, not more than everybody else, but I know enough to understand what they’re going to do next. They’re very predictable, they’re not unpredictable.

“And I think if Henry comes back and proves himself, and he gives them that sense of security – if he wins the 145-pound title and he’ll defend it – they’ll give him the title shot. But if Dana White feels one bit that Henry is going to win the 145-pound title, and bounce on him, Henry isn’t seeing this title. And I’m being honest.”

Cejudo is a former two-weight world champion, having won gold at both 125 and 135 pounds. In his last bout, Cejudo finished Dominick Cruz in the second round of their title bout in May of 2020. However, shortly after the win, Cejudo announced his retirement from the sport.

Now, the possibility of becoming the first-ever three-weight world champion in UFC history seems to be enough to have enticed Cejudo into attempting a comeback. It will be interesting to see if he’s able to get the shot to make it happen. 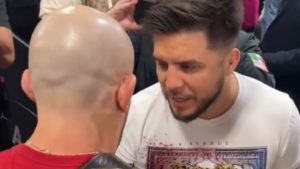