Dan Henderson is known for his tremendous ground game. Unlike in the beginning, when he was only trying to take the opponent down and punch him out, Hendo has improved his striking game a lot.

Hollywood has one negative record – he is defeated three times in a UFC title fight. But at the same time, he is the second oldest fighter ever to compete in the UFC, after Randy Couture. He was 46 years old when he had his last fight.

In the stand-up game, his right hook is his ultimate weapon. He knows to duck under and deliver a counter hook too. His punches are super precise but not too fast. Dan Henderson rarely throws a kick, but his right high kick is very dangerous. However, when the opponent is on the ground, he usually tries flying superman punch or flying elbow to the downed opponent, and he has become known for that.

On the ground, Dangerous tries to control the game with his superb wrestling. He is a master of maintaining the dominant position and controlling the opponent’s back. He prefers to deliver hooks on the ground. He stays away from submissions. Hendo’s submission defense is solid but he had always got problems with BJJ masters throughout his career.

Dan Henderson had his MMA debut in Brazil Open ’97 on June 15, 1997, where he defeated Crezio de Souza via TKO after 5:24. On the same day, he defeated Eric Smith via standing rear naked choke (which is his only true submission victory in the career).

Hendo returned to the UFC three times and fought in the smaller promotions between. His notable victims were Wanderlei Silva, Fedor Emelianenko, Antonio Rodrigo Nogueira, Gilbert Yvel, Murilo Rua, Renato Sobral, Kazuhiro Nakamura, Ryo Chonan, Akihiro Gono, Murilo Bustamante, Vitor Belfort and many others. Hendo had the fastest victory of his career versus Ryo Chonan at Pride Bushido 9 when he finished the fight via KO after only 22 seconds.

Dan Henderson had his first UFC fight at UFC 17 on May 15, 1998, versus Allan Goes, in Mobile, Alabama, in the Middleweight division. He won the fight via unanimous decision after 15 minutes.

In his second UFC fight, Hollywood faced Carlos Newton on the same day at the same tournament. Henderson won the fight via split decision and became UFC 17 Middleweight champion. After this victory, he fought in the smaller promotions until the year 2007.

Dan Henderson returned to the UFC as a Pride Champion. UFC decided to give him a title shot, and see whether Pride FC champ can become a UFC titleholder too.

As a current Pride Middleweight champion, Dan Henderson returned at UFC 75 to fight for the Light Heavyweight belt with Quinton “Rampage” Jackson on September 8, 2007, in London, England, in the main event of the evening. After excellent five rounds, Rampage Jackson won the fight via unanimous decision. 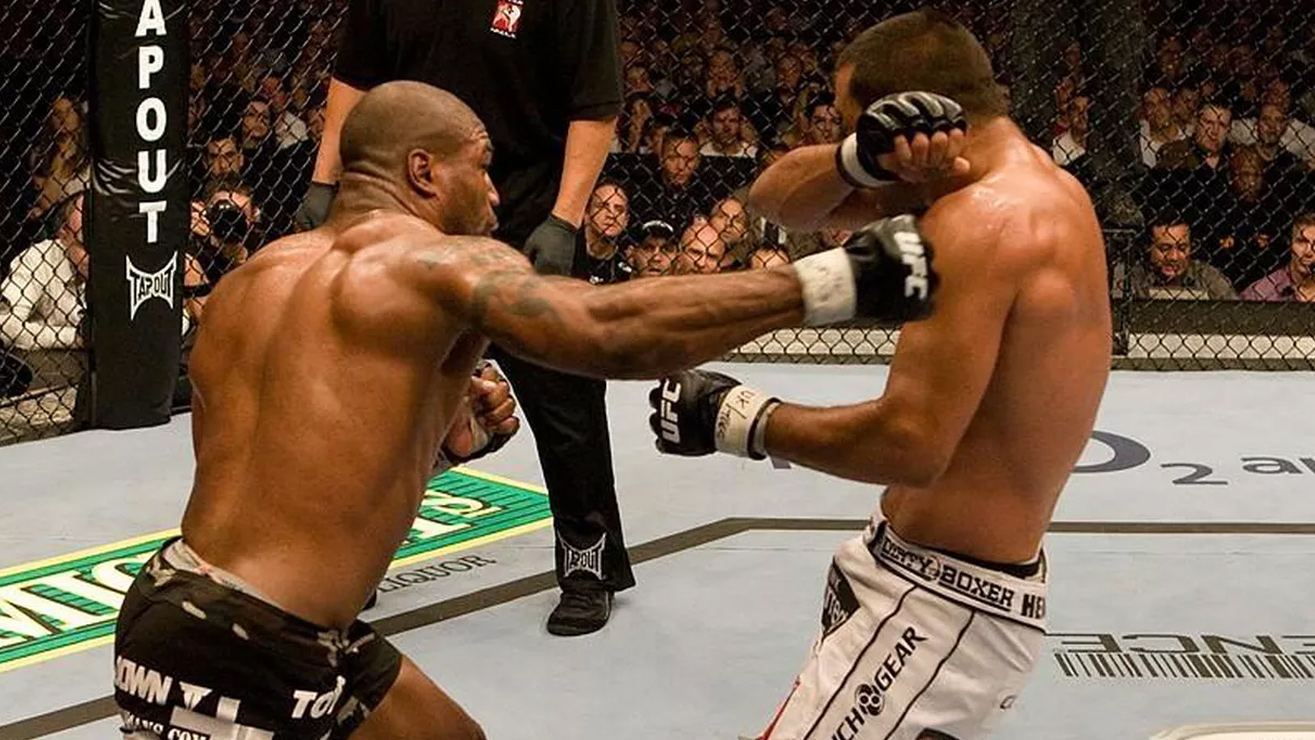 Hendo got a chance for one more title shot versus Anderson Silva at UFC 82 on March 1, 2008, in Columbus, Ohio, in the main event of the evening. This was a Middleweight Title fight. Hendo won the first round. But at the end of the second round, Silva mounted his back and secured a rear-naked choke. Anderson Silva won the fight via submission.  Both fighters earned The Fight Of The Night bonus. 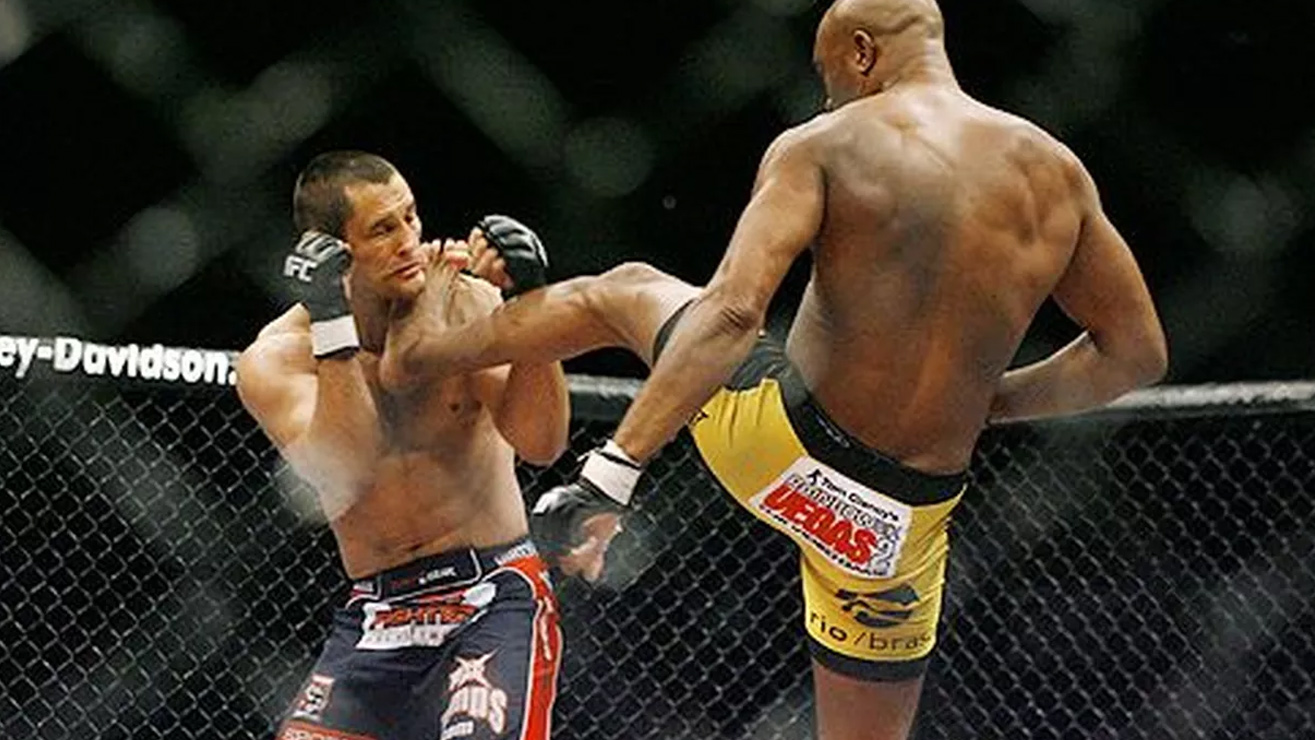 His next opponent was Rousimar Palhares at UFC 88 on September 6, 2008. Dangerous won via unanimous decision. It was Hendo’s first win in the UFC after 10 years.

Dan Henderson fought Rich Franklin at UFC 93 on January 17, 2009, in Dublin, Ireland, in the main event of the evening. Henderson won via tight split decision. The fight remained controversial by a third-round eye poke, which many people, including Franklin himself, thought was intentional.

Michael Bisping was throwing a lot of trash talk on Dan Henderson, and Hendo said his only goal is to shut his mouth. The two fought at UFC 100 on July 11, 2009. Henderson delivered a tremendous overhand right in the second round while Michael Bisping was trying to circle around him. Unfortunately, The Count leaned to the wrong side. 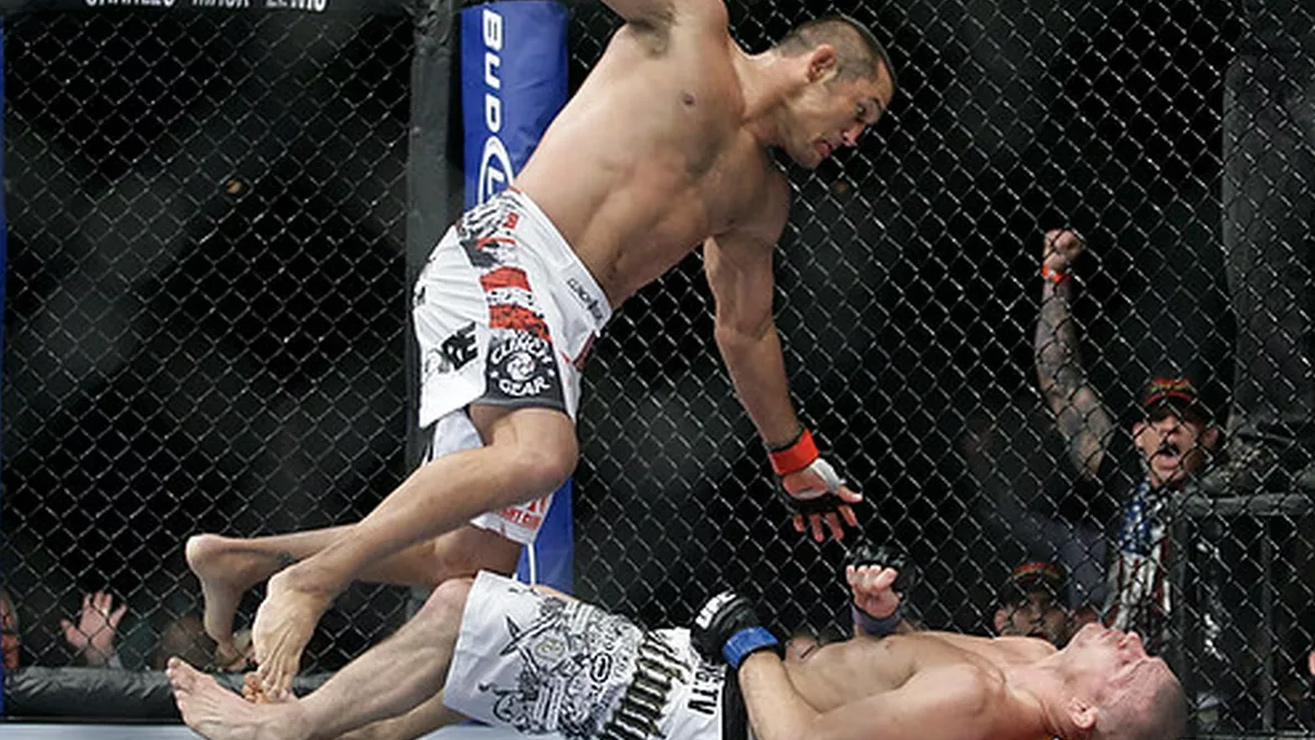 Dangerous slammed Bisping on the ground with a brutal flying superman punch, and won the fight via KO, receiving Knockout Of The Night award. After this fight, Dan Henderson signed Strikeforce contract.

Dan Henderson fought in the main event of UFC 139 against Mauricio “Shogun” Rua on November 19, 2011. Hendo won via unanimous decision, and both fighters received Fight Of The Night bonus. 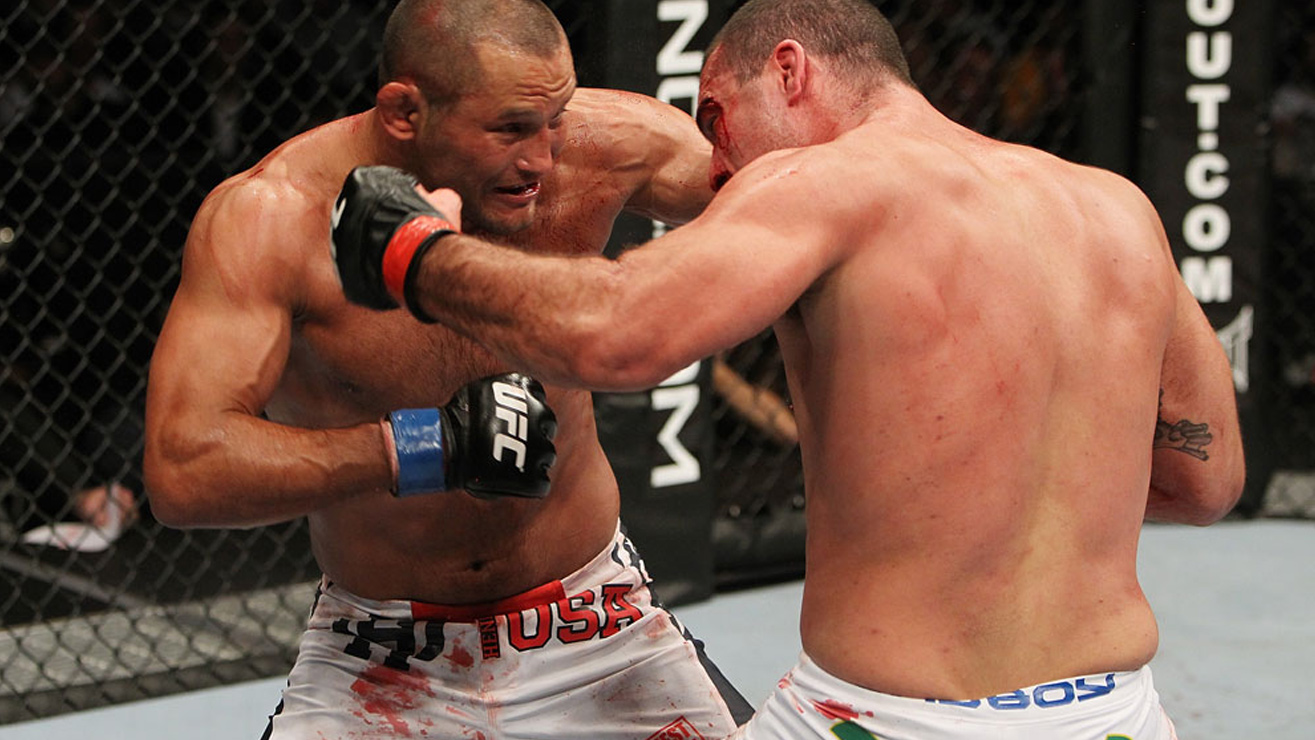 In the next fight, Hendo faced Lyoto Machida at UFC 157 on February 13, 2003, in the co-main event of the evening. Lyoto Machida won via split decision.

His next opponent was Rashad Evans at UFC 161 on June 15, 2013, in the main event of the evening. Rashad Evans won via split decision.

At UFC Fight Night 32 on November 9, 2013, the main event was reserved for Dan Henderson and Vitor Belfort. In their rematch, Hendo went down after a punch and Belfort was raining punches on the ground. As soon as Hollywood stood up, Vitor Belfort delivered left high kick and won the fight via KO.

In the main event of UFC Fight Night 38 on March 23, 2014, we had a rematch between Dan Henderson and Mauricio “Shogun” Rua. Hendo won the fight via TKO, despite Rua knocked him down once. He earned Fight Of The Night, and also his first Performance Of The Night bonus.

Dan Henderson faced Daniel Cormier at UFC 173 on May 24, 2014, in the co-main event of the evening. DC won via rear-naked choke in the third round. 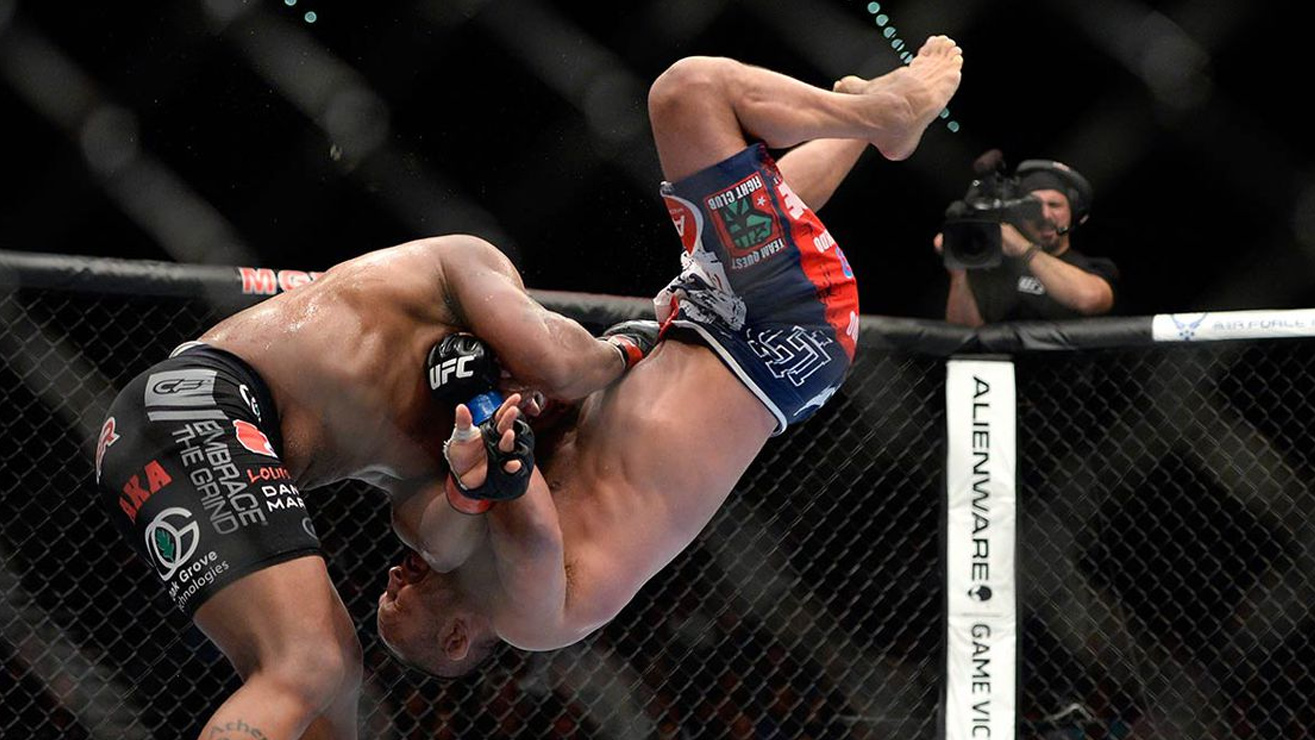 Gegard Mousasi defeated Hendo after only 1:10 at the first round via TKO at UFC On Fox 14 on January 24, 2015, in a Middleweight bout. This was Henderson’s quickest UFC defeat.

Hollywood faced Tim Boetsch on June 6, 2015, in the main event of UFC Fight Night 68. As soon as the fight opened, Hendo delivered a brutal right hook, which was followed by a right uppercut. Boetsch went down and Hendo started raining right hooks and won the fight via KO.

Vitor Belfort and Dan Henderson fought for the third time at UFC Fight Night 77, on November 7, 2015, in the main event of the evening. Like the last time, Belfort was convincing. He hit Hendo with a brutal left high kick again and started raining punches on the ground. Belfort won via first-round KO again.

Hendo fought Hector Lombard at UFC 199 on June 4, 2016, and surprised everybody. Despite Lombard was very aggressive and even knocked him down once in the first round, Henderson stood up and delivered a very attractive right high kick followed by a back elbow. Henderson won the fight and earned Performance Of The Night bonus.

In the last fight of his UFC career, Dangerous had a rematch with Michael Bisping on October 8, 2016. Hendo dropped and nearly finished Michael Bisping in the first and second round. However, Bisping was better in the last three rounds and won the fight via unanimous decision. Both fighters received Fight Of The Night bonus. 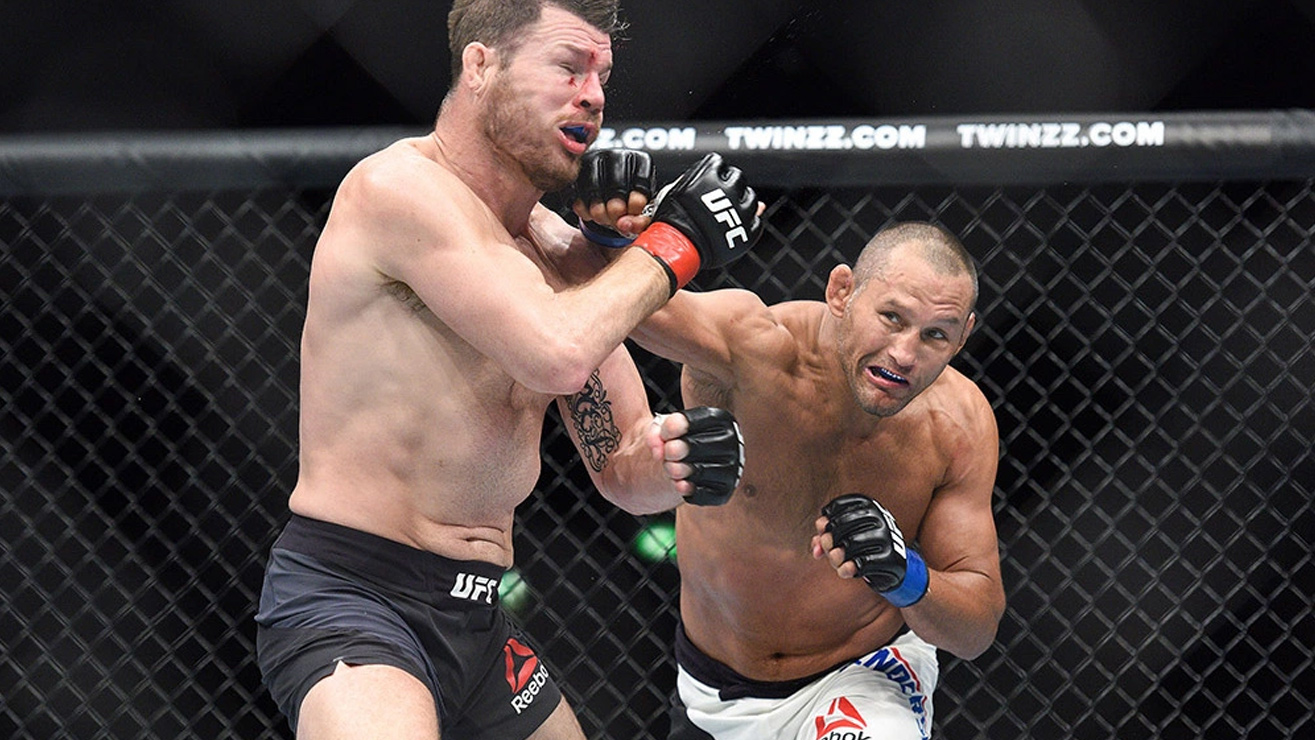 Dan Henderson is married to Alison Henderson, and he has two daughters – Danielle and Sierra, and a son – Reese.