Chito is coming off the biggest win of his career this past weekend. In the main event of UFC San Diego, he knocked out Dominick Cruz and became the first fighter to defeat Cruz in a non-title fight.

With such a big win, Vera believes he could be next in line for a title shot but isn’t tripping too hard on the situation.

“I feel like they could really give me the title fight. I’m asking crazy for it. I’m thinking I deserve it, but I’m not full of shit,” Vera said on Monday’s episode of The MMA Hour. ” I don’t waste my energy on things I cannot control. The UFC likes me? Sure, they love me. Dana likes me? Sure, 1000%. They want me to be a world champion? Sure, I sell. If that arena [on Saturday had] 3000 people, 4000 people, they’d be like ‘okay, we got we have a little problem. Maybe you gotta keep just winning to see what you can do. The way I won, how I put the crowd on their feet- that’s all they want. All the smoke.”

With the top of the division being jam-packed, there is no clear next contender, and Chito understands that. So instead, he feels performances in the next few months will determine the next No. 1 contender.

One fighter that is teasing a return is Henry Cejudo. He never lost his belt; instead, he vacated it when he retired. If he were to come back, Chito wouldn’t mind if he skipped the line.

“He’s a former champ and never lost the belt, he just retired – maybe because USADA scared him, who knows. But if he comes back and he skipped a line, that wouldn’t bother me,” Vera said. “Like really, why would that bother me? I feel like these guys get so crazy. Dude, we’re adults. Like they really bitch like ‘oh, you’re retired, oh you fight.’ Like fu*k, you’re fu*king pus*ies. I’m like what the fu*k. This is fu*king fighting, this isn’t the disney channel or some shit…Just call Dana, if he wants you, he’ll tell you the truth.”

'Chito' wouldn't be bothered if Cejudo "skips the line" 👀 #TheMMAHour

A few hours after the interview, Ceujdo responded on Twitter.

“Of course the champ skips the line! And they say I’m irrelevant but they can’t keep my name out their mouths,” Cejudo wrote.

Of course the champ skips the line! And they say I’m irrelevant but they can’t keep my name out there mouths. https://t.co/iMlkjyEOFd

It will be a very, very interesting few months in the UFC’s bantamweight division. Strap in. 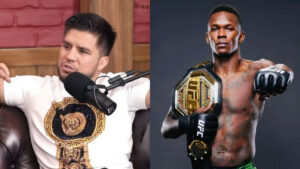