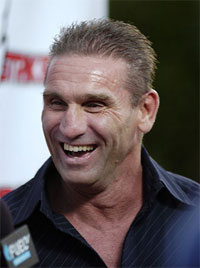 Ah Shammy. Damn, Shammy. If ‘backfired’ needed a visual representation in the Merriam-Webster Dictionary, just throw a picture of an unassuming Ken Shamrock filing papers against the UFC. When this story first broke months ago, I tried my hardest to ignore it until UFC slapped me in the face with a press release that Ken Shamrock’s lawsuit against ZUFFA has failed and he will be obligated to reimburse ZUFFA for their attorney fees. Check out the official press release from ZUFFA.

Las Vegas, NV (USA) – Zuffa, LLC, doing business as the Ultimate Fighting Championship® (“UFC®”), was awarded a legal victory today against former champion, Ken Shamrock. Shamrock, who claimed Zuffa had violated certain contractual provisions of his final fight agreement, was demanding several hundreds of thousands of dollars in compensation he claimed was due and owing from the UFC. Following a trial before the Honorable Susan H. Johnson, the Court entered a sixteen page written decision concluding that Ken Shamrock was to “take nothing by way of its Complaint filed April 15, 2008, and judgment is rendered in favor of Zuffa, LLC dba the Ultimate Fighting Championship.” Specifically, Judge Johnson ruled that Zuffa (1) did not breach the contract; (2) that the contract should be interpreted in manner advocated by Zuffa; and (3) that, in any event, Shamrock and his attorney/agent Rod Donohoo waived any purported breach by Zuffa.

“The UFC has a clear and unambiguous attorney fee clause in all of its contracts with fighters to the effect, that in the event a fighter loses any contractual challenge in court, that fighter will be responsible for paying our fees. Accordingly, we will be filing a motion to seek recovery of all of our expenses and fees which were occasioned by this lawsuit.”

Damn Ken. You just didn’t get thrown under the bus with that press release. More like you go tossed in a wood chipper, and then thrown on the streets of Spain just before the Running of the Bulls. Bummer man. Look on the bright side. At least you are in EA Sports MMA.