Will Smith smacked Chris Rock at the Oscars ceremony over a Jada Pinkett joke.

Hollywood fans were shocked with what just happened at the Oscars ceremony after renowned movie star Will Smith smacked his fellow actor Chris Rock on national television. Smith later addressed the issue and apologized for his actions.

Being the comedian he is, Rock, who was presenting the best documentary feature, pulled off a witty “G.I. Jane joke” about Smith’s wife Jada Pinkett, referring to her being bald. Pinkett would roll her eyes after the following joke:

Smith appeared to be laughing it off at first. but he later came up to the stage and hit Rock in the face with full force.

“Wow!” Rock said, following the slap. “Will Smith just smacked the s**t out of me!”

Smith responded after returning to his seat and yelled:

It can be recalled that Pinkett Smith announced last year that the reason why she shaved her head was because she had been struggling with alopecia, well-known hair disorder.

Smith won the best actor award for his role as Serena and Venus Williams’ father, Richard in the movie “King Richard.” During his speech, the 53-year-old was reduced to tears and apologized for what he has done.

“I want to apologize to the Academy,” Smith said. “I want to apologize to all my fellow nominees. This is a beautiful moment and I’m not crying for winning an award. It’s not about winning an award for me. It’s about being able to shine a light on all of the people. Tim and Trevor and Zack and Saniyya and Demi and Aunjanue and the entire cast and crew of ‘King Richard,’ Venus and Serena, the entire Williams family. Art imitates life. I look like the crazy father, just like they said about Richard Williams. But love will make you do crazy things.”

Smith and Rock have yet to personally talk about the issue but one thing certain at the moment is that the comedian will never joke about Jada again.

Chris Rock declined to press charges on Will Smith, following the incident.

Here is how Dana White, Jon Jones and MMA community reacted to the slap:

FINALLY!!!!! there's an #Oscars show worth watching. AND @chrisrock has a chin https://t.co/SYahGonQTg

Very hard to surprise me nowadays but watching Will Smith slap the shit out of Chris Rock is very surprising! I’m actually amazed that this happened. You could see the moment Will started to feel played

Let’s do it in August on my undercard https://t.co/jBYIpHOTk2

Anyone watching the #Oscars? Will Smith is a gangster for that one, Chris rock was the ultimate professional for the way he continued

Lmao!!!!!!!!! If that was @ColbyCovMMA he would of been on the phone calling 911 while trying to give Trump a hand job. Well played @chrisrock. You took that shit like a man… You should catch him in the parking lot lol pic.twitter.com/4Cznq3il3l

Hey @chrisrock I got your back and you @ColbyCovMMA not so much. pic.twitter.com/XHsfyAaRAV

Next @ufc match up @willsmith vs @chrisrock
Book it asap #Oscars

Sucker punch? He looked boy in his eye and slapped him. Lol don’t tell me you getting soft on me now Dan! https://t.co/IucktixF04

Colby and Chris rock crying with eachother “but It was just business” pic.twitter.com/RvlcO0rW1F

Woke up to Will Smith slapping the shit outta Chris Rock… pic.twitter.com/bm7GYbHugI

#willsmith might want to pull one of these out 2night 😆 pic.twitter.com/ckoDsDCYPn

That was a clown move by Will Smith.

Rock is a comedian he's doing what comedians do… Make jokes.

Will Smith is whack for that weak move.

What you protecting your wife from? Words? He's protecting his wife from jokes… how stupid and weak.

Mike Lowery out here getting active lmao 🤣 Chris should of rocked his ass ctfu https://t.co/7QiGoA6EnS

Will Smith don't gotta cuss in his raps to sell records pic.twitter.com/XdCftf8C8c

Didn’t knew it was called a Will Smith #WillSmith #Oscars2022 #chrisrock #willsmithchrisrock pic.twitter.com/OxQzQz7NLz

We giving points for slapping comedians……..yall real inconsistent out here 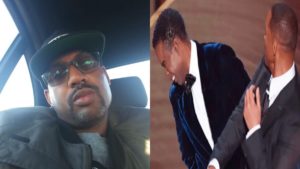 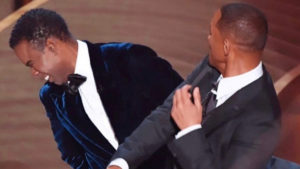 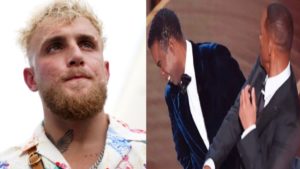 Jake Paul Wants To Book Will Smith vs. Chris Rock, Offers $15 Million To Each