When the fight went to decision, BJ Penn never thought he would lose 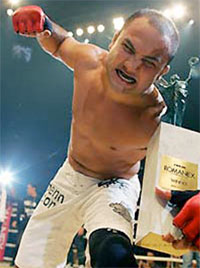 By the end of the day, we may or may not have a video interview with BJ Penn. I guess technically, that statement can be applied to every day. However on this day, BJ Penn is making an appearance in New York and Bauzen is patiently waiting for him to finish his book signing in order to ask BJ Penn one question. It’s not in regards to him losing his belt at UFC 112, it’s not even related to MMA at all. It’s something much deeper than that, so deep that when asked the question before, the interviewer removed the video from Youtube. While Penn was in New York, he stopped by the Opie and Anthony show and told the hosts that he never thought he was going to lose against Frankie Edgar at UFC 112.

You get caught trying to put on a show for the fans out there. I like to box too, but things went the way they did and it sucks man.

I never thought I was going to lose the fight but I was thinking ‘Man, I got to finish this guy off’. [When] you go to the decision, it’s like rolling the dice and it’s something you don’t want to play around with.

I kept trying and I ended up getting fatigued after a while and Frankie was still there, and it went to the cards.

It was just a real irritating moment [when Bruce Buffer announced Frankie Edgar’s name] I didn’t want to sit there and take anything away from Frankie’s win.

I’m not much of an Opie and Anthony fan. I was too busy listening to Buzz Aldrin spit game to Jesse Jane today on Howard Stern.