We have something you don’t have

Sometimes you have MMA clothing and other times you have Klingon technology disguised as MMA clothing. Such is the case with Jaco Clothing. They were nice enough to send everyone at MiddleEasy some of their intergalatic engineered threads so that we can feel like we’re aboard the Starship Enterprise. These guys make some of the most sophisticated MMA gear in the world. Absolute high tech stuff. They use friggin bamboo to create their products. Bamboo, the same stuff Pai-Mei used to beat the hell out of Uma Thurman in Kill Bill. Normally Kill Bill has nothing to do with bamboo. But if your name is Bill, bamboo has the ability to kill you by literally growing through your body. Yeah, it’s so strong and grows at such a rapid rate that during WWII, captured soldiers were tied down to the ground and a bamboo seed was planted underneath them. In 2-4 days, the bamboo would grow through their bodies. That’s some friggin torture, but hopefully Jaco Clothing won’t do that to us (yet).

Aside from their shirts which are hands down the most comfy threads (it’s like silk) in the MMA game, their shorts are something that should be studied in a labatory at Harvard. Opening that box must have been what the military feels everytime they open the doors to Area 51. These shorts are the real deal. 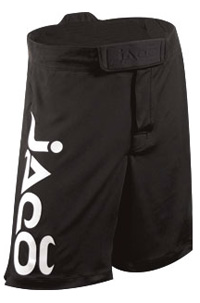 Don’t even attempt to put these on if you don’t intend on Gilbert Yveling on someone in the cage. The quality of these shorts are impeccable. The dudes at Jaco Clothing defintely have some obsessive compulsive attention to detail disorder (if that even exists). It took me a while to figure out how to put these shorts on but that’s because nearly everything is reinforced with extra fabric to prevent any obstruction whenever you’re elbow deep in a person’s skull. The Jaco Clothing logo is embroided on the back and the shorts are split designed, sort of like Melvin Manhoef’s K-1 shorts but less medieval executionerish (dude needs to fight in America). On the side of the shorts is this complex configuration of bamboo, Chinese caligraphy and Jaco Clothing’s logo. If you look at it for an extended period of time, it feels like it has a deeper meaning that you’re supposed to decipher…sort of like an episode of Lost. Inside the shorts is synonomous (big word) to  staring at a lava lamp after a 1978 Tommy Chong just paid you a visit. There’s so much to look at. Hidden in the back is a ‘rubber printed’ black bamboo pattern with the Jaco Clothing logo in the middle. It’s like ‘Where’s Waldo‘ but replace Waldo with things that don’t suck. Take a look for yourself.

Jaco Clothing will forever be rawesome for sending us free gear. Hats, shirts, shorts, Jessica Biels. Life is great. It goes without saying that if you’re looking for exquiste MMA gear that’s obviously been created in the distant future and brought back to 2009 via flux capacitor, then check out Jaco Clothing. 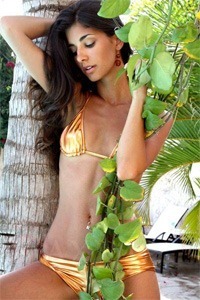