Villasenor with the win. Any guy that has ‘senor’ in his name you pretty much have to call him sir. But what do you really expect? If Evangelista Cyborg is the Terminator, than Villasenor is John Connor and the dude just saved mankind. We shouldn’t been happy, we should just do the right thing and erect statues of Joey Villasenor with whatever materials are readily available to you (hot dog leftovers, a bottle of red stripe and an empty wine bottle). The entire fight was a tactical war, both fighters showed an enormous amount of respect towards each other, but tonight Skynet was not successful in starting its enslavement on mankind. It’s good to see Joey Villasenor in the ring again.This fight was actually scheduled to happen roughly this time last year but Evangelista Cyborg had some serious passport issues which is synonymous for the time machine was broken (If you’ve never seen The Terminator, reading this is like trying to decipher hieroglyphics).

Every middleweight seems to be gunning for Robbie Lawler but it would be rawmendous (just made that up and it’s already the best word you’ve read today) if Strikeforce nabbed Badr Hari from K-1 and brought him to America to battle with Villasenor. Actually anybody versus Badr Hari would be great unless if your name is Remy Bojansky (then you might get jumped and stepped on). Congrats to Joey Villasenor for protecting mankind for an army of cyborgs and terminators. We’ll get started on those statues as soon as possible. 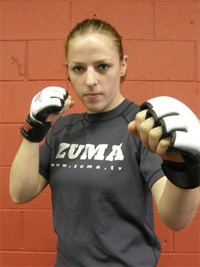