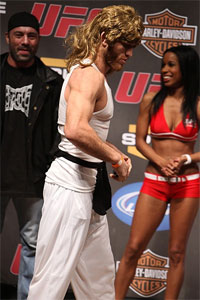 If you were in Southern California and tried to order an ‘al pastor taco‘ from a food truck in the past two weeks, chances are that you heard the phrase ‘No Mas’ quite often.  Don’t worry, the pigs in California are currently repopulating following my visit. I felt taco’d-out come week two and subsequently moved onto In-N-Out double doubles and Tommy’s chili-cheeseburgers.  Now that my pants no longer fit, I’m finally home and back to eating oatmeal until the ‘Cali-weight’ comes off.

Much like Tom Lawlor, I too put on around 15% of my bodyweight in just one week on vacation. After several competitive eating challenges and countless nights of binge-drinking, the time for recreational weight-fluctuation is over and ‘Filthy’ is back to cutting weight for his fight against Joe Doerksen at UFC 113.  Following his loss to Aaron Simpson, Lawlor told Ben Fowlkes at MMAFighting.com that he blew all his fight money from UFC Fight Night 20 on KFC double-downs and drugs.

“Sometimes I buy drugs and throw them away just to help the local economy and keep drugs off the street. So I’m blowing my money in a lot of different ways.”

With all these extracurricular activities, Tom’s resume makes him all-the-more marketable than the average UFC fighter. Leave it to someone dubbed ‘Filthy’ to clean up the streets of Florida by supporting local street-pharmacists and fast food establishments.  He’s an inspiration to us all. A special shout-out goes to Barack Obama for my $1.33 stimulus check for 2010. I can’t wait to stimulate my local economy too. [Source]