This is what I saw at the EA MMA press conference…

November 11th is here, confidentiality agreement is officially over, now I can tell you what we all saw at the EA MMA first look press conference. The demo we saw ran on an Xbox 360. Unfortunately we weren’t allowed to actually play the game (leave it up to two EA geeks to do that). When they unveiled the game for the first time, everyone in the audience sort of gasped at the quality of the game and the absolute photo-realism of everything. You’ve seen the screen shots and video so all of you are familiar with the level of awe this game has woven into it.

First off, everyone has to give it up to UFC Undisputed for being the first game to ‘revolutionize’ MMA games. I was the first guy in line at my local Gamestop to be made fun of by local kids while I waited until 12:01 to grab my copy. If you were with MiddleEasy back in May, then you know the level of excitement that I had for this game (and consequent frustration at the magical Fabricio Werdum armbar that is impossible to prevent). UFC Undisputed is an amazing game that dominated May-June 2009 sales figures. It brought THQ out of a huge deficit and it’s constantly been lodged inside my Xbox 360ever since it dropped in May.

With that said…EA Sports MMA is light years ahead of UFC Undisputed.

It’s hard to even compare the two games, they almost look like they were designed for two completely different consoles. One of the most amazing thing about the game was the sheer character fluidity. As you approach your opponent, your hands go up, your fighter stance is more aggressive and control appears to be vastly more responsive. If you back-off from your opponent, the hands go down, you sort of jump around and get more comfortable with the cage. Also, the one thing that really had everyone salivating was the announcement that each fighter has their own unique stance, strikes, submissions and defense. That means every fighter throws a right hook differently. When you catch your opponent’s leg, not every fighter goes for the take-down. Some will spin your leg around and just deck you in the face…others will go for the sweep and slam you to the ground. Someone in the crowd asked ‘Well wouldn’t this take a lot of time from the developer’s standpoint to program different moves for every fighter?‘. The lead developer said ‘It’s worth it, we want to make EA Sports MMA as realistic as possible‘. In UFC Undisputed, all fighters were modeled from the skillset of Kickboxing, Boxer, Wrestler, Muay-Thai and Brazilian Jiu-Jitsu. This essentially meant that all moves looked the same and could be executed by any fighter that had those skillsets. This is not the case with EA Sports MMA. Each fighter has moves that they are historically known for doing. You won’t see Fedor going for some flying heel-hook (Imanari style) but you will see him going for his wild overhand right (which we saw land and drop Brett Rogers). 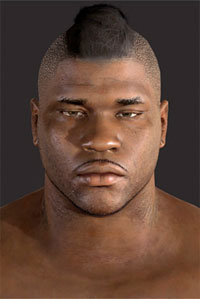 In UFC Undisputed when fighters get in the clinch, movements seem very mechanical and only one fighter is allowed to hit at a time (something that we obviously never see in MMA). EA Sports seemed to capture the sporadic nature of being in the clinch, both fighters were struggling to get out while both trade blows simultaneously. Fingers were being extended to try to peel away the other fighter’s grip while elbows were being thrown at the same time. Keep in mind, while this was going on sweat was building up on their skin and with each hit you could literally see the sweat come off their face and onto the mat. Speaking of mats, EA Sports MMA has a lot of different venues to fight in.

From the demo, we saw Muay-Thai rings, Brazilian grappling dojos, British boxing rings, a circular cage that looks exactly like what they used in YAMMA pit fighting, six-sided cages used in Strikeforce and I believe I remember seeing just an open area in the middle of a jungle. In fact, the locations were so remarkable that someone in the crowd asked if they could them again on the monitor.

EA Sports also announced Strikeforce as a premier league within the game which obviously leads us to believe that there will be other leagues (King of the Cage, Sengoku, MFC, DREAM, XFC) that will have their own fighters who each obviously have their own unique stance, movements, strikes…etc.

This game is going to be huge. Massive. Bigger than what we speculated when we wrote our ‘It’s time to get amped up for EA Sports MMA‘ article in September. I’m pretty sure I left a lot out so feel free to comment on the article and I will try to answer every question.