This is the MMA breakout sport story of decade 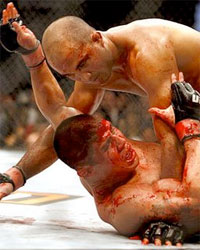 The end of a decade always brings with it a myriad of polls, lists and top stories of the last ten years in a nice little package, perfect to read while half asleep in your ultra soft bath robe that you got for Christmas. USA Today is asking its readers to vote for the “Top sports breakout of the decade” and the emergence of MMA to the mainstream is sitting solidly in first place right now, beating the likes of the combined awful losing streak of the Boston Red Sox and the Chicago White Sox (the real Chicago baseball team) and Tom Brady as a Super Bowl QB amongst others.

“Mixed martial arts: Into the ring — or the octagon — exploded mixed martial arts, a sport with roots in ancient Greece but as modern as short attention spans. The sport combines wrestling, boxing and open-fingered gloves mostly in three five-minute rounds, and, since the Ultimate Fighting Championship arrived in 1993, has popularized men such as Kimbo Slice, Chuck Liddell and Randy Couture. In 2001, UFC was sold for $2 million. By 2008, according to Forbes, it had the power to generate $250 million in revenue. Another example of MMA growth: UFC.com says The Ultimate Fighter on Spike averaged 3.4 million viewers this fall, 72% higher than the average audience for the first 14 weeks of the NBA on TNT. “

Watch the King Mo entrance you DIDN’T see this Saturday

Daniel Cormier: I Don’t Know If UFC Will Be Able To Make Khabib Want To Fight Conor McGregor