Thiago Alves has super glue in his brain 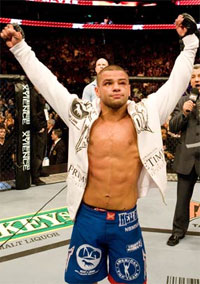 Alright, Thiago Alves doesn’t have superglue in his brain…but the doctors told him to tell people that he does. Hey Thiago, you should not pay your medical expenses and then tell the doctors that you will reimburse them in five-easy payments of candy corn. If you measured the amount of WTFness in both statements, their WTF levels would be equal. In an interview with MMAWeekly, Thiago Alves talks about what went down during his brain surgery.

“When my manager called me on Wednesday he told me I was not going to fight, I got really frustrated and upset. When I heard the next day that it could be career ending, I was just going nuts for about two days.”

“I was really, really scared about not fighting again. I would say it was the longest week of my life.”

“They put superglue between the vein and the artery. That’s what the doctors told me ‘just tell everybody you’ve got superglue in your brain right now, and you’ll be alright.‘ So that’s what I’m going to tell everybody. That was the procedure pretty much.”

Props to the doctors for saving Thiago’s life, but what’s the deal with the superglue talk? If someone told you that your brain was being held together by superglue, what does that say about the state of US health-care? It’s like medical labs across the country have been replaced by Home Depots. [Source]